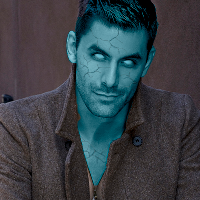 
Partners:
none
Appearance
Istil stands at an impressive height of six feet and seven inches, over most of his kind he isn’t the tallest however against a vast array of other races he towers like a giant. His body is rather thin but not in a scrawny way. Even when he puts on muscle his build isn’t imposing it’s more akin to a scholarly one like most of his race, to this end his weight has never been over a hundred and seventy pounds. His eyes are clear no pupil or iris in sight however they are a very faint hinting of silver to their colour. His skin is a brilliant and even powder blue in its shading it appears close to a turquoise colour but in the light definitely a strong blue overtone can be seen. His hair is long seen braided as even then it carries down to the middle of his lower back. It is a silvery white in contrast to his skin tone. Giving him almost an ethereal feel to his presence. The markings which line his body are jagged and fractured sort almost like broken spirals that line his chest and adorn his arms.

Most commonly Istil is seen wearing a black tank top with black trousers is boots are thick and even leather also black. Above this he wears a large loose robe, which can be tightened or loosened with ease to account for the harsh weather in the north.
Personality
Istil like all of the Eidisi is obsessed with learning. Whatever kind of learning he can do he will do. However as of late his learning preference is split between what possibly none of us will ever know. However despite this he holds himself in a mildly high regard. Whilst not overly boastful of his skills like his peoples, he does take it upon himself to help others learn and progress along their own path. Istil’s voice however is extremely refined. As he speaks one would think of him as coming off as pompous or acting high and mighty even when he’s acting humble or trying to apologize. It’s just the tonality of his voice. And due to this he often has to explain himself whenever he means something. With regards to the touchier subjects Istil often tries to rise above them. To think them through logically leaving out emotion, but as much as he tries sometimes they will seep through and his actions may not reflect his words. Istil has a natural Knack for Alchemy it’s something he’s always had the talent to do. Istil has had a fascination with poisons for a long time. Because of this he’s spent a lot of time around the various herbs and venoms which could cause great harm. In doing as such he’s come to learn about both the poisons themselves and the antidotes for them. Istil is despite his overall mannerisms Patient, he is also very meticulous in his approach to things. Because of this he’s also a very stoic person. Not revealing emotions easily or heavily as much as this is good it also makes people wonder what exactly is going on within his head.
History
Istil has been a loner for a long, long time. Mostly his own fault for his pursuits of knowledge and other things. However this time to himself has left him very open. In the past he had a good relation with his family and that was really about it. Three brothers and two sisters. All of which as much as they loved him gave him grief for his appearance. Being so light and almost ghostly his family often called him “The spectre” for numerous reasons. One of which was the fact that besides meals and heading out for food and such he was rarely ever seen. Holding himself up in the library of their house and pawing over books and books of knowledge.

Later in his life he found his way out of the library and into the world. His first actual encounter with a woman outside of his family was… Awkward but still she found a slight charm to his nature despite his lack of people skills. However the meeting was short lived but a memorable one for him as she was part of a travelling caravan of people who headed off almost as swiftly as they had arrived. Years passed since then and Istil had been learning more and more. Eventually stumbling across the arcane. Istil was never really one to get mixed up within the scores of magic that ploughed through the world however, given the number of peoples that funnelled through the city which he lived in he took it upon himself to try to learn something of it. Messing about with the basics was something he couldn’t do. He needed something called “a conduit” But what exactly was a conduit?
Istil soon found out when a member of the seekers came into town. Unbeknownst to him that Istil was learning a few bits and pieces about arcana from stories and legends in the books he’d read. Istil snuck out of his home one night. It was through this end that Istil found the seeker practicing his arcane techniques pulling and pushing some small rocks around just outside the city. With a small word Istil disturbed him and as much as the sorcerer tried to scare him off Istil stood firm. Wanting to know what was causing this. Over the course of several weeks the seeker took Istil under his wing as a neophyte and began to teach him what the arcane practice was. Istil having always been a very astute study didn’t take too long to pick it up. However what surprised the seeker was Istil's innate ability to spot the arcane. Nothing bold and brazen just that strange inkling. it was this inkling that lead Istil to join the local cell of the seekers in Viden.

Istil ended up spending several years with the seekers in Viden, learning from them in vastly imaginative ways and learning to control the magic of Gravitation. His own conduit was removed from him as his teacher died, the sorcerer who was teaching him had a tragic accident and ended up believing his own power too great going a mad from the burning and megalomania which followed eventually leading him into a sever fit of casting and losing all of his sanity too it. from fairly ramshackle parts with the help of his tutor. it's a simple ring band glove that loops around the middle finger and around the wrist. The leather loops through a single steel ring. The ring itself is the focal point for him to push and pull from with his gravitation skill. However he's had to try and disguise this as this conduit was one he acquired from another neophyte before leaving the seekers in their entirety. Now Istil is travelling he cannot go back to his home, he cannot see his family. As if he does it may be the last time he ever does. Now Istil is headed towards Andaris. His life on the line almost literally.
Housing
At present Istil is keeping to himself and travelling around. As such he’s hitched up his tent on the back of the wagon he pulls with his horse. All his possessions lurk atop the back of his wagon along with all of his notes. His musings and his other endeavours. His Dog Seis often mills around him when he’s on foot, however when on the wagon the dog usually sits with him at the front alongside watching out. That is unless he gets bored and decided to run behind the wagon.
Knowledge & Skills