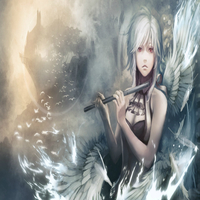 Factions Joined: None as of yet.

Partners: None as of yet.
Appearance
Saraphyne is, like most of the Avriel race, humanoid with some very obvious differences. She is approximately 5' 5", weighing in at 115 lbs. Her wingspan is about 1 1/2 times her height, and she has difficulty keeping her wings folded away when on the ground (partially also due to her love of flying and reluctance to stay still). Her wings are a dusty grey, much like the feathers that cover her back and upper chest. There are blue-grey markings on her chest, and patterns on her arms as well. She has short, white feather-like hair on her head, and her facial features are quite delicate though they lack the rosiness associated with humans. Her "neutral" expression is innocent and vaguely curious though it can turn nasty in seconds. Saraphyne has completely sky-blue eyes (no whites of the eyes, but a darker blue iris). When the skies are a beautiful blue her eyes will mimic, and when they are storm grey so too her eyes will darken. Her skin is quite pale, appearing almost translucent. She is often wearing a lightweight, thick short tunic and leggings, her practical outfit of choice. Also, a belt with various light weapons, and occasionally light armour.
Personality
Saraphyne is quite naive. As an Avriel who has only just matured past her teenage years, she still has much to learn about the world around her. She can be very arrogant and almost ruthless, as she suffers the belief that her race is the best. However, sometimes this ruthlessness is simply a cover for the sheer terror she feels at not understanding her surroundings. She will always act as though she has all the knowledge, but once that shell is cracked it is obvious how little she really understands. If one pays close attention, it can be seen that she is constantly observing her surroundings, attempting to gain knowledge for her own purposes. When asked about anything personal Saraphyne is very reluctant to answer, believing that everyone else uses knowledge to blackmail as she occasionally does. However, she is very quick to anger when a sensitive topic is broached, such as any topic to do with her race or history. Saraphyne believes herself to be a righteous person, although it could be said that she doesn't really understand what that entails. She will fight for what she thinks is right, which unfortunately seldom lines up with the common good. The one thing in life that she truly enjoys is flying, particularly at dawn or dusk. She doesn't understand how any creature that can't fly could ever had a life worth living. Were she to lose that ability it would destroy her. What is your character like? What kind of voice do they have? How are their views on touchy subjects? What are they crazy about? What traits does your character have? Any virtues?
History
Talk about your character's past here. What's their deepest, darkest secret? Who was their first kiss? Ideas: Mother: Estranged
Father: Deceased
Maternal Grandmother: Estranged
Maternal Grandfather: Estranged
Paternal Grandmother: Distant relationship
Paternal Grandfather: Deceased
Younger brother: Antagonistic relationship
Younger brother: Close relationship
Paternal aunt: Deceased
Maternal aunt: Never knew (alive)
Paternal uncle: Estranged
Maternal uncle: Distant relationship
Maternal uncle: Close relationship
Paternal cousin (F): Friendly relationship
Paternal cousin (F): Friendly relationship
Housing
Where do you live? Describe your room/environment and what you have— furniture, decorative items, maybe even a pet?
Knowledge & Skills
[anchor=marks][/anchor]