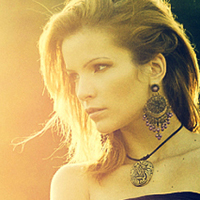 Ciarán
“Never regret thy fall,
O Icarus of the fearless flight
For the greatest tragedy of them all
Is never to feel the burning light.” Profession: Acolyte of the Seekers
Factions Joined: The Seekers

Appearance
Ciarán as a whole, is a game of deception. The only intimidating features she holds is her natural height of 5'9" and her piercing amber gaze. Like the rest of her race, her hair is kissed by fire, falling just below her shoulders. Her eyes are gently slanted and framed by sharp brows. Her cheekbones are high and clean cut, her face unblemished save for a scar along the curve of her jaw. Years of hardship forged Ciarán into a creature of survival. Her body seems coiled, as if ready to strike, and though she is sleek in body mass she makes up for in toned muscle. There is no mistaking her heritage and the embers that burn in her veins, ready to ignite.

Due to the frequency with which she had been forced to combust, her body is feverish to the touch at times and her extremities have a slightly darker discoloration.
Personality
Ciarán's emotions had once been turbulent but as a child that grew in the wake of calamity and torture and pain, those emotions diminished little by little, locked behind a wall that wouldn't break. The Aukari is calculating and tactful, using logic as the forefront for her decisions. She considers feelings to be little more than hindrances but due to the nature of how she was raised, it is often difficult for her to control bursts of anger, rage and hate. She was not trained by her people, but instead by one Aukari she had come across on her travels with Jaedus. This laid the foundation and allowed her some measure of control. Impulsive reactions were a detriment, and that is the source of her self-conflict.
History

Ciarán didn't know her parents for long. They were taken from her, or rather, she was taken from them. In the lonely woods, on the dusty roads, the wind howled and metal glinted under starlight. Men holding colorless banners had accosted them in the night like the beasts of legends and in that chaos, she could still hear her fathers shouts and her mother's yells. They had fought, like all Aukari did. They had been warriors; assassins, killers, but they weren't an army. Ciarán didn't know if her parents had perished that night. She'd been told to hide but when the cart had been knocked over, she came spilling out of it. A child no older than 8 arcs, she was spirited away as easily as a petal on the breeze.

The bandits had a leader, a man named Gus; self professed "warlord" of the Andaris mountains. At first, Ciarán had believed his boasts and his gluttonous lies. She had been terrified of him and the way he displayed cruel tactics and administered brutal punishments. He was a brute, but he was shrewd, with a sharp wit that saw potential in an Aukari child. He took her under his wing, not out of any desire to protect her, but out of his own plans to mold her into the tool he wanted and needed to strike fear into his enemies. And so he trained her to fight. First with wooden swords, then with daggers and as she grew older, shortswords. And inbetween them all, she was forcibly induced into combustion. At first it had been experimental, but as prisoners and captives were brought to her Gus had realized that they spilled far sooner than they ever meant to when in the sight of a child devoured by flames. And as she grew, she became the weapon that he desired, brandishing fire and sword to get from her master's enemies what he wanted, and when she didn't, she was punished; kept in a cage and isolated.

Ciarán was fed lies and she believed them. He often claimed that he was doing this out of the greater good, that he was the sole peacekeeper in those mountains; that what she was doing was inherently good. She wanted to believe, because in her heart, she was afraid of herself.

On the night she turned sixteen, Gus had returned with another captive, but one that looked far different than the regulars that had usually been brought to the encampment. He was possibly no older than thirty arcs with a hard face and clothes she'd never seen before. He was not being brought to be intimidated but rather, to serve as a captive, just as she was.

In the tent that she was placed he was kept, his arms bound and face sticky with blood. "Who's blood?" She'd asked him, and he'd turned to smile at her. "Theirs."

His name was Jaedus, he'd told her, but nothing more. Ciarán had watched him as he sat in his corner and as he slept. On some days, he disappeared with Gus just as she had, and she heard the sounds of men screaming, as though they were being tortured. When he'd returned, he said nothing, though his hands were stained and his gaze was hard. On the next night, it was her turn. And in the weeks and months that passed, Ciarán began to ask him questions. Who was he? Where was he from? She had never spoken to anyone outside of the encampment. At first he was resistant to the questions, but after a time, he relented more than surprised to find a girl that still clung to some measure of curiosity, even in her predicament.

Nashaki, he told her. That was where he was from. But he was a wanderer, by nature, a servant of Wisdom and Knowledge. They spoke for as much time as was allotted them and quietly, to avoid attracting the bandits who were stationed outside the tent walls. And as the seasons past, a mutual bond of friendship grew. Two captives, held together only by the thread of survival. Jaedus was Ciarán's only link to the outside world, a world she could only scarcely remember, and he realized this, as he spoke to her. She confessed her desires to seek more than what she knew, to control what she was. She confided in him her need to be more than just the monster she was made to be. The culmination of it all was Jaedus' realization that despite the adversity, Ciarán still fought to survive. She did not succumb to the fire inside but fought it tooth and nail, for her right to live; to explore and to seek.

On the dawn of her seventeenth arc, shouts and yells tore through the encampment. Jaedus, still chained, could do nothing, but Ciarán had been given what little freedom was allowed a pair of manacles on her wrists. She'd ran out of the tent, her teeth bared and eyes wild, only to find a handful of people remaining. Gus' corpse lay dead and withering, and in her state of shock, she could not pry her gaze away to watch the men as they stepped into the very tent she'd lived in for years. From it, Jaedus emerged, freed from his bonds, but as his fellow colleagues turned to leave just as briskly as they came, he called out a single word: "Wait."

He'd turned toward the young woman with a contemplative look. "It is only through adversity that we gain understanding." He'd told her. "You walked a lonely road, and still you persevered. You don't have to walk alone anymore, Ciarán, if you take my hand." His hand was raised, outstretched. She hadn't known what to feel in that moment; her heart had skipped a beat. But tears had not been shed, any trace of them had dried up long, long ago. Aurel took his hand and stepped into a world that no longer sought to make her into a monster.
Housing
Ye Olde Inn in Andaris City.
Knowledge & Skills

Arcana: Gravitation
Melee Combat: Daggers
The Fire Within: A Tool for Intimidation (MY)
A Battle of Wills: Fighting the Fire (MY)
Marks Section