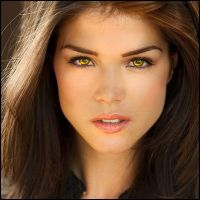 As an Avriel, Lanidya inherited the typical birdlike feathers that cover her body. Her wings, however, are a bright scarlet. She tends to be a fastidious groomer, however, like most of her kind she's not a bather. This fastidiousness is mostly out of anxiety and a need to do something with her hands. Her fingers are long and claw like and a blue so dark that it is almost black in its color. She is considered a beauty, although taller than the usual Avriel female and more muscular. She's lean, however, thin in comparison to other Avriel her height but that doesn't stop her from being strong. She has large golden eyes that are quiet sharp.

Lanidya dyes her bright red wings black, in order for them not to stand out. At first she found this frustrating being that she loved her natural color but that could not be helped. As part of the Shadow Wing she would need to keep them dark. She got used to it and now marvels at the beauty of her shiny ebony spread. Her wings are her pride and joy, although her golden eyes are the true center of her beauty.

Her human form is as attractive as her Avriel form. Tall and lean, Lanidya tends to sport an athletic build typical of her profession. Even in her human form, she hardly smiles, wearing, instead an scowl that can be off putting to most humans. Her golden eyes remain the center of her features and it is quite difficult to stare into them directly. Her hair is a light brown with hints of red which is straight and long in length. She is just as careful in grooming her human looks as she is with her Avriel form. Although, she is lean, Lanidya still sports graceful curves that give her a more sensuous look as a human.


Give us a description of your character's appearance here. What do they wear mostly? Do their eyes change color in different light? Maybe some more pictures if you feel like it.
Personality
Lanidya has the typical haughty attitude of her people, but unlike most of them she's more of the quiet sullen type. She's an angry being, although not really sure why. Her time as an adolescent is still a mystery, but like most of her kind it was difficult and full of many challenges. These challenges have seemed to have molded her into a person full of hate for any being not Avriel. That is not saying that she likes her kind any better, but she tolerates them enough to be around them.

Although, she is well controlled when it comes to acting out, Lanidya does tend to simmer in her fury. She uses that energy in her training, however, and usually works it all off until she is too exhausted to act out on it. It is not difficult to anger Lanidya, but she is also very good at ignoring the ramblings of her kind, preferring to remain silent and broody. She'd rather just stand there saying nothing than join in, although there are times when she will scream them all into silence. Her outbursts are not uncommon and this had led to her being a solitary figure. This is just fine with her because she has no desire to make friends.

Preferring her own company and being the silent type will allow Lanidya to go on missions where secrecy will be very important. She doesn't 'need' to be in constant company either, so solo missions are not problem for her. Lanidya shows very little mercy to humans and has yet found one that has intrigued her enough to want to get to know them. This goes for Avriels as well. Lanidya finds her kind loud and obnoxious hence her toleration of them. Still, she rather be in their company than in anyone else's. Of course she would rather be in her own company than anyone else's.

This tendency for solitude has shrouded her in mystery which is confusing to a people that tend to like to express their own importance. If Lanidya realizes what an enigma she is to her people she doesn't show it, or rather she doesn't care. Being in the background is something she is used too and uses it to remain invisible even when she's in the middle of a room of Avriel's. So far, no one has tried to get to know her, but if someone does try they will have a difficult time of it. She will never turn down an Avriel's attention, but she would rip a human apart if he or she even tries.

Talk about your character's past here. What's their deepest, darkest secret? Who was their first kiss?
Housing
Lanidya lives in the Dominion Barracks with the other students. This means that she has the same bed as everyone else, and the same furniture. She has very little privacy but that's fine with her being that she's able to find solitude in the middle of a large crowd. Fortunately, the other students tend to leave her alone and leave her stuff alone as well. So it works just fine. Perhaps later on, she'll move into her own place until now, she's sharing space with her fellow students.
Knowledge & Skills