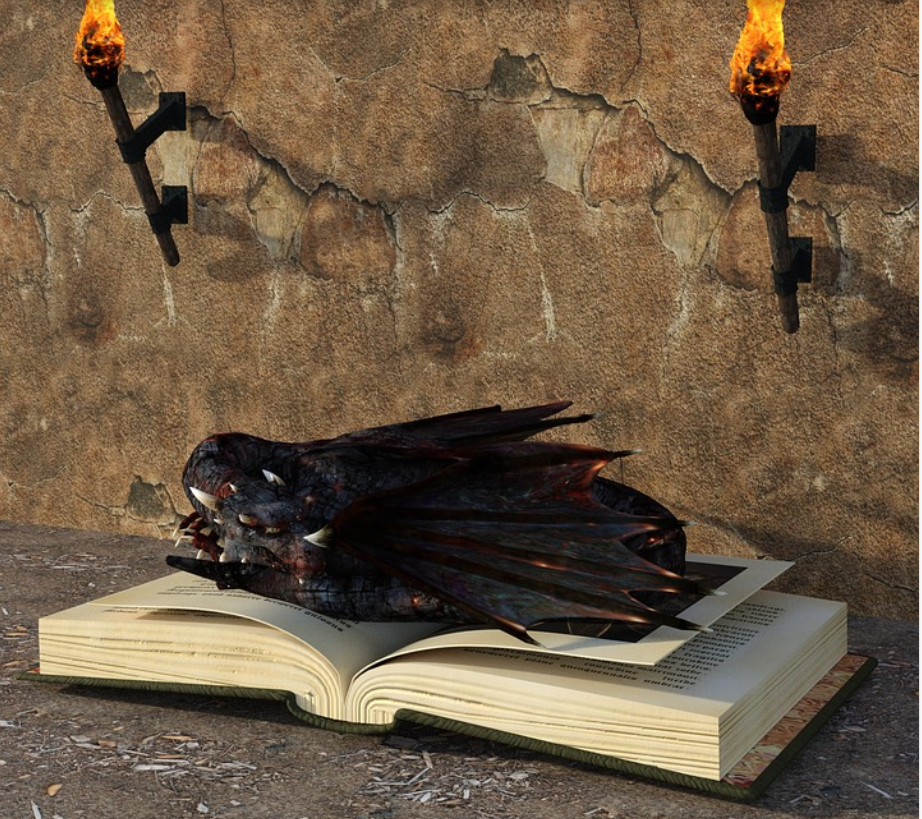 For many mortals, the Immortals are seen as the oldest and greatest beings in Idalos. However, while the Immortals are indeed ancient and mighty, they are far from the oldest deities of Idalos, nor are they the greatest. The Immortals were themselves created to face a foe that was far more ancient and far more powerful than they. These foes were the Dragons, beings who were tied into the very nature of Idalos itself, titans of the battlefield and the defenders of the world.

These treacherous Verses, now known as the Discordant, created their own servants to wage war upon the World Spirit and its Verses. These insectoid servants, known as the Arotinin, gave the treacherous Discordant the advantage in their bid to control Idalos. However, the Verses, with the help of the World Spirit itself, created their own servants to drive back the Discordant and their Arotinin. These servants were the Dragons, and they were well designed for the task of fighting the traitors.

The Dragons were endowed not only with a gift for warfare, but an extremely protective nature. Even the worst of the Dragons acted in what they believed was the best interests of the world at large, though what that meant varied from Dragon to Dragon. Moreover, when that which they considered under their protection were harmed, the wrath of a dragon was a great and terrible sight to behold. Further empowered by their connection to the Spirits of Idalos, the Dragons turned the tide against the Discordant and the Arotinin, driving them back and defeating them utterly.

Rather than slay these traitors, however, the World Spirit took what was perhaps an undue level of pity on them. The World Spirit sealed them away within great barriers that dampened any powers that came near them, along with a few of the Dragons that volunteered to be sealed away with their ancient foes so that they may watch over them and ensure they do not escape. With these barriers in place, the Dragons and their creators relaxed, content in the knowledge that and they could watch over their world in peace.

However, the Dragons and their creators knew that their hard won peace could not last forever, so they did not fall to sloth. Yet, none could have predicted what would break that peace. A hole was torn in the fabric of Idalos, connecting it to the dream world of Emea for the first time, and through this hole came a new form of beings, known now as the Originals. Eight beings of tremendous powers, these Originals set about claiming Idalos as if they had a right to it, waging war upon the Dragons and their creators. For a time, it seemed as if the Originals must be defeated, but two among their number, a dark sorceress known as Delana and an old warrior and craftsman known as Luesco, found the secret to creating servants of their own with the power to usurp the Domains of Idalos itself. These beings were the Immortals, and it was the creation of the Immortals that ultimately spelled the downfall of the Dragons.

Even after the creation of the Immortals, the war was long and grueling, and as it waged on, it seemed it would end in the extinction of the Dragons and the Verses, and even the World Spirit itself was grievously wounded. However, in the twilight of the war, one of the Originals had a change of heart. Perhaps ironically, it was Luesco, who had created the first Immortal, who came to realize the extinction of the Dragons and the Verses would be a grievous crime.

The Dragons and their creators had already been driven to a final stronghold, a group of islands in the sea. When it seemed their defeat was inevitable, Luesco and his daughter Ethelynda appeared before them. A deal was struck, and Luesco rent the Iulure Islands from the sea itself, lifting them into the skies and creating a shield of his own design about them that none could penetrate. Ethelynda would hold the souls of the fallen Dragons in her protection, keeping them from the grip of Famula, Cierel’s Jailer of Souls, and Vri, Brel'tek's Watcher of Death. With this, the Dragons would survive and the souls of their fallen would be kept out of the hands of their greatest enemy.

However, things were set in motion for their return. Part of the bargain that sealed the Dragons away also gave Ethelynda the charge of protecting the souls of the fallen Dragons, so they could eventually return to Idalos. After the Immortals War, Ethelynda loosed those souls into Idalos, infusing them with her own power to give them a boost. This infusement created the Ithecal, while the Draconic Souls settled around Idalos in order to become new Dragons that would eventually awake.

In the 719th Arc, Padraig and Faith Augustin found the Dragon Frosvinndur behind the Northern Barrier, and in the 721st Arc, the sleeping Dragons born from the souls Ethelynda protected, as well as two hidden survivors of the war, were awoken and freed. Dragons have returned to Idalos, and while it remains to be seen how their return will affect the world, there is no doubt that their return will mean things both great and terrible for the future of the world.

While it might be tempting to dismiss the Dragons as simply a counterpart to the Immortals, the truth is far more complex than that. To be sure, there are some notable similarities between the two pantheons, but these similarities only serve to highlight how stark the differences truly are.

Both Dragons and Immortals tend to be rather static beings, however with Immortals, they have surprisingly little choice in the matter. For how powerful the Immortals are, they are bound by their Domains and there is much about themselves that they cannot change, a fact that several Immortals have grown to resent. Dragons, meanwhile, are unchanging not because they cannot change, but because they frequently will not change. Dragons are inherently stubborn creatures and are incredibly reluctant to change their views or actions without overwhelming reason to do so.

Dragons also possess the ability to grant special powers to their followers, much like the Immortals. However, in contrast to an Immortals Blessings, the Effigy of a Dragon does not require ongoing input from the Dragon who granted it in order to grow. However, this is due to Aesthete being far stronger than Divine Ether. If applied to a standard Mortal, Aesthete will completely burn them out. That being said, the Effigy of a Dragon is also notably stronger than the Blessing of an Immortal.

Another core difference between Effigy and Blessings is how the Dragon benefits from Mortals bearing their Effigy. While Dragons gain no benefit from Devotion, they instead rely on their Bearers to help them stabilize the corrupting effect that exposure to Emea has on them. Emea had no discernible effect on Idalos when the Dragons were inititially created, but the increased exposure of Idalos to Emean energies has a debilitating effect on Dragons. However, Mortals who bear a Dragons Effigy serve as a sort of drain for the Dragon, allowing them to reverse the Emean decay Dragons might otherwise suffer.

Compared to their Immortal counterparts, Dragons lack a few powers such as: Dragons lack the shapeshifting abilities of Immortals, and are instead locked into one form. They also lack any connection with or presence in Emea and indeed have no way to access it, as they predate the establishment of the link between Emea and Idalos.

However, there are a few powers granted to Dragons that are beyond the reach of an Immortal. Each Dragon is always accompanied by a flight of lesser draconic sub-species known as Dragonlings. Each Dragonling is unique to the Dragon they follow, and each Dragon gifts a member of their flight to those who bear their Effigy. Dragonlings themselves can also gain power from the Effigy. In addition to the Dragonlings, Dragons are such a powerful force of natural energy that bits of errant energy will coalesce into a smaller, less powerful lifeform known as a Dragonet. Dragonets are tiny creatures that don't gain power from Effigy and barely have any power of their own, but they can last for centuries and have an innate desire to bond with sentient creatures, most specifically Mortals.

Furthermore, every Dragon possesses tremendous strength and endurance, even disregarding the powers granted by their natures. They are, in fact, strong enough that in pure one on one combat, no Immortal can outmatch a Dragon for pure strength and endurance. It should, however, be noted that an Immortal can still defeat a Dragon through clever use of their Domains and other skills. They will not, however, be able to simply overpower a Dragon. Finally, each Dragon is completely immune to any attack that comes from a power that draws from the same sources that they themselves can call upon. A Dragon who can wield fire is immune to fire, a Dragon who can wield fear is immune to drugs and powers that impart fear, and so on.

Finally, a note as to some of the oddities of the Dragons. Dragons do not age and do not seem to reproduce, though a Dragon who is slain will eventually be reborn if their soul is not kept from Idalos in some fashion. This is due to the nature of Dragons, as they are the living manifestation of the world. For a Dragon who can wield fire, as long as there is fire in the world, then so is that Dragon. However, if every fire in Idalos is extinguished, the Dragon will lose all of its powers that are drawn from flame, and if all the sources of a Dragon's powers are destroyed, they too will cease to exist. However, if those sources are brought back into the world, the Dragon will also return.