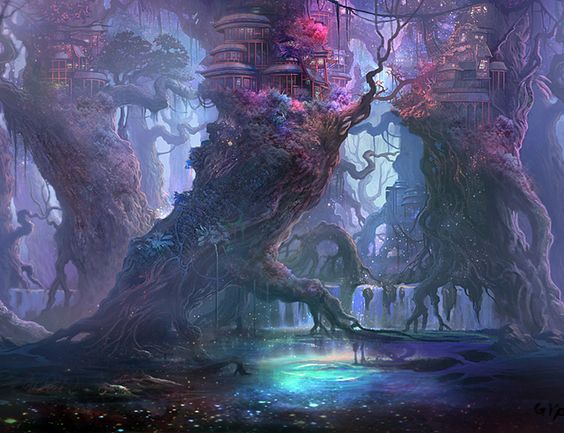 The Rebirth Cycle in Desnind is one of festivals and symbolism. Light returning after darkness, hope after despair. But Desnind has taken a real battering in the last few Cycles and Arcs and there is a change in Desnind. A feeling, difficult to pinpoint, that there must be some sort of action. Throughout this season, there are a number of small indications that the leaders of Desnind, both formal and informal, are trying to foster more of a sense of community, but community in the region. Desnind seems to be thinking that perhaps, it can no longer survive alone.

Long cold days leave the world in a constant state of twilight. Living outdoors becomes extremely difficult due to the icy temperatures and flora and fauna suffer during this time. Grass dies making livestock, who need to eat more to survive the harsh conditions, difficult to feed, and a lot of trees fall into dormancy, slowing down their metabolism and energy consumption in order to survive the season until the sun comes up again.

While the days slowly tick on, the sun begins to sink to the horizon before finally being blocked by one of Idalos' slow orbiting moons. The stationary effect of this moon, however, is partly due to the Ellune and their dormant ruler, Treid. His influence over the moons, and his less than favorable views of Faldrun, prevent the moon from showing any light for 30 trials. A curse he enacted to punish Faldrun for his backhanded and wicked ways, Treid was incapacitated by Audrae before he could remove it. Now the world suffers sunless for 30 trials an Arc, until the light of Ashan touches it once more.

Cylus is a time when darkness takes Desnind and there is an air of doom over the place. Shadows lurk in each place and the trees and plants seem to move in eerie patterns. Being far in the south, Desnind rarely experiences extremes of weather, but this Cylus sees snow, sleet and freezing rain.

The first few weeks of Ashan are rigidly cold. Though the sun finally makes its appearance from Cylus, it takes many trials before the ice melts away into puddles, blooming flowers and grass. Ashan experiences a cold period, lasting for a quarter of the season before the temperature finally heats up enough to begin sowing crops for the Arc. Ashan is mainly known for it's spring weather, gentle breezes, and the rebirth of plant life. Barren trees slowly sprout buds of leaves and flowers, releasing a green haze of pollen while green grass grows slowly from the wet soil. Dead leaves from the previous season are swallowed up during this cycle, providing nutrients for new life growing from the ground.

Ashan lasts a total of 123 trials (days) while experiencing pretty moderate weather. Later in the season, rain clouds become a common thing, depending on the environment. The temperature begins to heat up while the green haze of pollen dies away and the budding plant life fully sprouts into bushy trees, thick grass, and lively, colorful flowers. As the season closes, the temperature rises, ushering in stronger storms and much hotter weather.

First third of Ashan experiences cold that only reluctantly recedes. Desnind then starts experiences warmer weather with conditions that seem to be in favour of nature and many plants bloom sooner than they usually would.

It's been a tricky time for Desnind and we approach the coldest season of the arc with limited supplies and low morale.

This season, we want to focus on the Factions here in Desnind. Our aim is to get more PCs involved in these. Please PM Peg if you'd like to be involved in any of the existing factions or would like to set up one of your own. Thanks!!