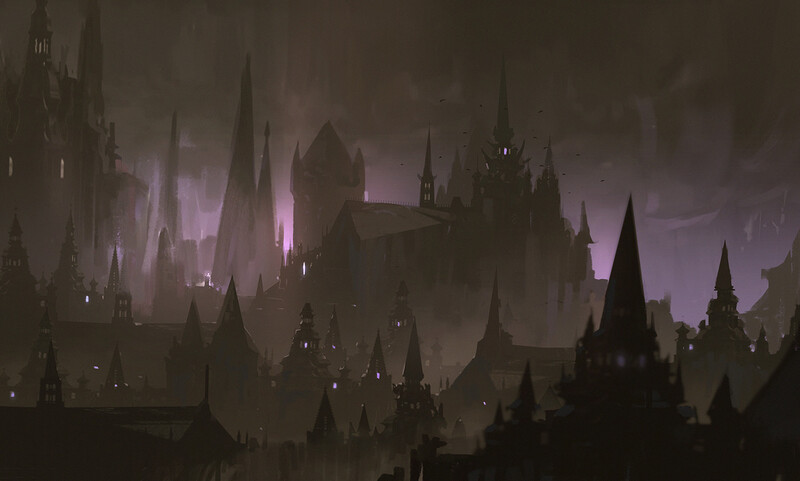 Once the epitome of advancement and wonderment, hidden away to the far South of Idalos, this ancient city of stone suffered catastrophe in Arc 413. With a long and contentious history, Quacia has struggled to maintain a presence in the greater world.

Mainly serving as the center for the powerful Theocratum church, Quacian society adapted to survive as a city. Trade and commerce is incredibly limited, and highly controlled by the Guilds of Quacia. The way of life for many citizens is arduous, strict, and unforgiving, though there are places within the city to help relieve the pressures.

All magic is accepted. Most of those who come to Quacia are magical refugees or pioneers, as Quacia can boast to be one of the most advanced magical hubs in the world - given that they accept any and all magic, and rarely regulate these disciplines and practices.

However, this goes for only domain magic. Immortal worship is punished as heresy. Those who are Blessed by Immortals may visit, but they must be incredibly careful when interacting with the elites and the Theocratum. Speaking about their marks must be closely watched, for it is likely to come across as preaching or attempt of conversion for the dominant religion. Thus, flagrant and open Immortal worship, or public speeches in favor of them, are treated as a crime and punishment is enforced by the Theocratum.

The city of Quacia is a symbol of ancient opulence.

Those rare structures which have managed to survive the Cataclysm are typically gorgeous, their stonework vivid and captivating. The remainder of the city takes on a far more Gothic appearance where possible, and the appearance of shambling piles of trash where it is not. Structures are defined by their sharp lines, and by the presence of ornate stonework statues plastered throughout the city, especially present upon the occupancies of the Theocratum.

The roads are kept to at least a passable level of cleanliness by roving gangs of those who care enough to see it so, though it is not uncommon to find layers of trash cast around the area, detritus blending into that which was already present. Shanty in particular is covered in filth and garbage, even the roads themselves beginning to crack and break away into loose chunks of stone.

To the credit of the treeless city, there is a constant reddish-orange glow about the entirety of the state. The reason for this lies in the cultivation of Bloodlight plants, whose fruits are naturally luminescent, and whose primary nutrition is easily acquired via religious worship. The fruits of these plants are spread across the city, and replaced whenever they begin to dim, more than making up for the extreme darkness that would otherwise overtake a city incapable of producing enough lumber to warrant the creation of torches.

The local language of Quacia is Vahanic. It is spoken by all of the social classes. It is a surprisingly gentle language with light accenting allowing for the differentiation between similar words.

Tribunals of the Theocratum are indoctrinated in understanding the secret language of whispered words, gibberish sentences, and gestures that are often used by members in their search for heretics and traitors. This language has no name, nor any official teaching outside of the indoctrination chambers of the Theocratum, but the strange manner in which Tribunals share knowledge has raised awareness of its existence.

Whilst a majority of the Heaps are unaware of how to speak the Common language, this is not a universal ignorance. The nobility are often fully capable of speaking in the Common language for the sake of interacting with more effectiveness when discussing political matters with the rest of the world.

A good comparison between Vahanic and a real-world language would be Portuguese.

One of the few cities of the world where Magic is quite openly found to be beneficial and is encouraged.

While it is true that there are always individuals in any population who find the rampant practice of such abilities to be somewhat potentially dangerous, for the most part, the people of Quacia don't mind it so long as it doesn't negatively impact their lives.

For the sake of ensuring that accidents are kept to a minimum, a majority of practitioners are asked to keep their abilities to a minimum throughout day-to-day life, but there are no punishments for more grandiose displays so long as nothing is damaged and no one is injured.

Those who practice necromancy are required to be given access to a desired corpse by the corpse's relatives or immediate family, and are asked to keep such hideous abominations confined where they will not irritate the eyes of passerby, nor assault their noses with the stench, or their bodies with the diseased remains of decomposition.