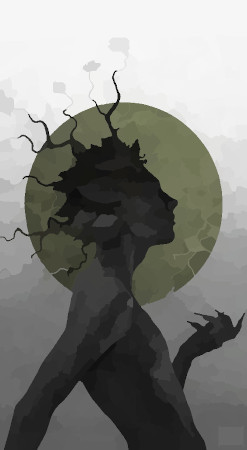 In seeking out employment as a mercenary within one of the many companies in Yaralon, Kisaik is told that she needs to show her skills and prove herself able. It will be up to Kisaik to prove to these leaders the skills that she posesses to make her a valued member within the company. Will it be stealth? Riding? It will be up to her.

Enchantment: When someone imbibes any measure of alchemical elixir from the grail, its effects will last for six trials at full strength before the effects wear off on the sixth day. However, once the full measure of elixir has been imbibed, the Grail leaves Kisaik's possession. A bird of some description absconds with it, leaving it in the lair of some dastardly villain or else great beast. Kisaik is immediately and persistently aware of the location of the grail for as long as it is out of his possession but must seek it out, which becomes an adventure in itself.

It was a very dark, overcast season, when Peona and Tsani planted their sprout in the soil of the Ojogbon tree. There was plenty of rain, and moisture in the air, but very little in the way of sunlight hit their poor sprout, making them worry that it might not grow at all.

Getting desperate for help, they decided to depart for the swamps to look for a great wisp that had been spotted there. After a long journey, they found the great, bright wisp, and begged for his help in giving light to the sprout before it failed. Moved by some inscrutable motive, the entity followed them to the spot where Kisaik was growing, and shone a nimbus of false light upon him.

Unknown to any, this entity was not a Wisp, but in fact the Immortal of Mimicry and Chaos, Aelig himself. It had decided long ago that it wished to have a spawn of the Tunawa race, being as their kind were so well disposed toward his domains of mimicry and illusion.

To their surprise, and delight, he began to grow swiftly before their eyes, until they had a full grown sprout, with dark bark and glowing veins. But before they could celebrate by plucking him out of the ground, the mother's grandfather emerged from a nearby hut. He stood before Aelig, and threatened the great Immortal, telling him that he must leave at once, and never return.

Amused, but in no way threatened, Aelig laughed a terrible laugh. The laughter persisted for many hours, frightening the mother and father enough to chase them out of the village, and send them fleeing to the docks and over the ocean. They were effectively banished, and left their sprout to the mercy of the entity and their grand father. Once the parents had been disposed of, Aelig took it upon himself to consume the grandfather, in effect making him one of his forms. From then, his avatar in the form of that grandfather, raised Kisaik in the ways he saw fit.

Meanwhile, Kisaik grew, knowing only his extended family and his 'Great Grandpa', learning all of the typical tunawa arts, stories, education and such, which were corrupted and tainted by the concepts of chaos and mimicry. Eventually he rebelled against these ideas, skewing to the concepts of justice, law, and order as a remedy to the atrophic chaos that threatened to stifle anything that grew. He went out into the world to seek his parents.

Kisaik has an illusionary hat that changes shape based on his current obsession or interest. There's a hat for near every skill set and profession that he becomes enamored with. Here are a few examples:

While under the influence of his current obsession, his personality and relationships will not fundamentally change. Just his specific passions and interests. The Illusory hat cannot be lost, and will find itself back on Kisaik's head should he misplace or leave it behind. Also, while the hat is taking the form of a profession/interest that includes the need for a kit, he can conjure a kit relating to those skills from within the hat. The kit's quality is equal in value to his current wealth tier. A skill kit can be conjured in such a way three times a trial, but will disappear should his hat change shape. The kit never includes weapons/armor/ammunition. He can change hats about three times a trial.

Fracture Scar Veins in the leaves and petals that Kisaik grows in his hair will possess fracture scarring, glowing green cracks that form around the stem or root network of any of his plant-like structures.

an extention of a tunawa's ability to throw their voice and imitate animal noises, Kisaik can make himself understood by animals near and far, to the point where depending on his Etiquette and other social skills, he may be able to convince them to come to his aid. Otherwise, he can reason with creatures that are negatively disposed toward him. This functions as a one-way communication, as he cannot understand the animal's language.

Fracture Scar: The scar associated with the acquisition of this ability and domain was acquired from a battle wound, which healed back but not without significant scarring along the right hand and forearm. Essentially the fingers are entirely glowing with fracture scars while running down in glowing veins toward the elbow.

This category contains only the following page.