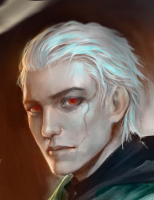 Often, it is those that are least expected to break the mold that do so the most effectively. As an Avriel, many don't expect Kalortah to become the next great singer and songwriter of Idalos, but if he tries hard, he can do so. And it is often in the least expected place that one finds inspiration. For Kalortah, his inspiration is found in a Slave Raider named Jenelle. A singer herself, Jenelle is the most beautiful vocalist that Kalortah has ever heard. Will he break the social customs of the city and approach her, asking her to train him to be the best he can? Or will he allow the social structure of the slave city to dampen his seemingly bright future?

It was the rainy season in Athart. Zi'da had come on with strong winds and torrential downpours, driving many indoors. But not Ophiriel. Quite unlike many other avriel, the young avriel reveled in the sensation of flying through rainstorms. Spending much of her time by the beaches of her home, and simply running or flying or dancing while water poured down.

During one of these flights, she was soaring over the seas, and a sudden thunderstorm had begun to gather. She panicked at the sight of lightning nearby, and lost her balance on the wing, falling into the sea. There, she was found by a kindly ferryman, who was working for the Windshear Brotherhood as a fisherman.

She struggled in the water, trying to keep her head above the surface. The ferryman sprung into action when he saw her and fished her out of the water using a weighted fishing net. Once on board, he took care of her, making sure she dried off properly and giving her his hammock to rest after her ordeal.

Unfortunately, her wings had been slightly damaged, making flying back to shore an impossibility. Not wanting to endanger the ferryman that had helped her, she spent time in his sloop, waiting the days away until she was prepared to make a return home.

Her influential mother, a slave trader in Athart, commissioned search and rescue parties, trying to find her. All the while, she insisted that the ferryman, who she'd since become infatuated with, stay away from these parties, and hide her in the cargo bay.

U'frek took to caring for her during convalescence, and through their trials together they became friends. Upon the boarding of U'frek's small sloop he was sailing, by bounty hunters looking for the merchant princess, U'frek convinced them through a bit of guile that she was not aboard. They left peacefully, and when he went down to check on Ophiriel, she was distraught, thinking that she'd endangered her savior. U'frek was impressed by the heart of the avriel. In time, over the course of her healing they became more than friends.

Eventually, her wings healed, and their time together of course had to come to a close. Ophiriel had to return to Athart in order that there would be no more search parties or intrusions on her lover's ship. It wasn't until much later, that she discovered she was with child. Fearing for her child's life, her own, as well as the Ferryman, she took the first offer of marriage that came her way during a celebration in mid-Zi'da. When Kalortah was born, on the 25th of Saun, nobody suspected that he was anything but pure-blooded Avriel.

His mother never knew the identity of the Ferryman, thinking him just a low-born Biqaj sailor with the Windshear Brotherhood when, in fact, the man was U'frek himself.

Tongue of the Chimera

Kalortah can change his voice to imitate any sound, whether another person's voice, or an animal or monster's cry. He has such precise control over his voice, that he can utilize any pitch and tone. He has complete control over his voice. In order to emulate a sound or voice, however, he must have specific knowledge of it to signify that he has spent the time and effort to study it. This comes in the form of singing knowledge. For instance: Singing: A tiger's rumbling growl.

The Gift of Flight

Once a season, Kalortah can bestow the ability to fly upon one other individual, which manifests a pair of aurora wings that reflect the color of the character's eyes. They must still develop flight skill in order to be any good at it. This ability can only be bestowed upon one person at any given time but persists for the entire season during which it was bestowed. He cannot bestow the ability to fly on another while the previous recipient is currently flying, and if for whatever reason the season turns while the recipient is in the air, they will glide harmlessly to the ground before their ability to fly is gone.

Once a cycle, Kalortah can die at will. When he does die, he is then reduced to ashes. The ashes typically scatter to the wind, unless bogged down by inclement weather. By the beginning of the next cycle, he will return from the ash to life, wholly restored, with no memory of how he died, or who or what was involved. He retains his memories up to the trial on which he died, but no further

Kalortah may manifest from any one or more grains of ash, should it fly to the four corners of Idalos, whether it finds itself underwater, in an open field, or out of a fragile urn. During this time, as the ash lies wherever it will, his soul is in stasis, neither alive nor dead. Should every last grain of ash be destroyed or denatured in some way, it may prevent his return to life, which will result in final death and judgment by the Twins.

The return of Kalortah from the ashes is an opportunity for telling stories in itself, and he might well find himself in a dangerous situation when he returns!

Kalortah can shift the color of any aspect of his appearance, shy of his clothing or anything he wears. From his hair, his skin, his eyes, his feathers, any and all aspects of his personal appearance can be swapped out for any color or shade of that color. Of course, this doesn't mean he can camouflage automatically, nor that these color choices will look particularly good on him, or that he'll be able to pass himself off as someone he isn't. Those aspects are governed by his Stealth, Cosmetology, and Deception skills, respectively. This cannot be done on the fly, but Kalortah must concentrate once a trial for roughly half a break to change his colors. The duration is indefinite, however, at will he can shed the false colors for his true colors.

Fracture Scar: A small line has formed along the iris of Kalortah's right eye, shining bright red. It's begun to spread along the circle of the outer iris, forming a semi-circular scar along the eye, giving it the rough shape of an anchor. approval

All Kalortah Satravial Abrogation Mutations remain, except those which impact casting.

This category has the following 5 subcategories, out of 5 total.