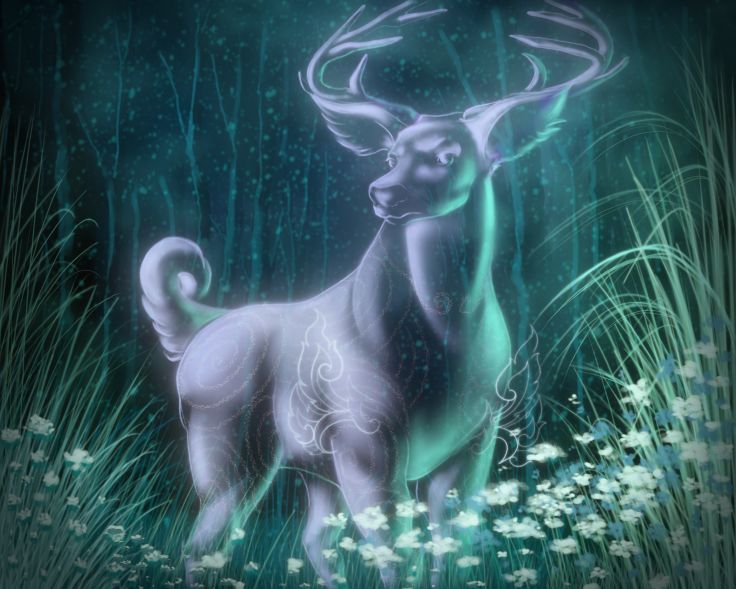 Familiars are broken into three broad categories: Osẹ-bori, common familiars, and magical/Blessing familiars. Familiars deal with Diri, the second level spirits that have various levels of sentience and a Purpose. It is the bond between a spirit and a mortal that makes a Familiar. Each bond is different per category. Bonds can be innate, sacrificed for, magically forced upon a spirit, or gifted. 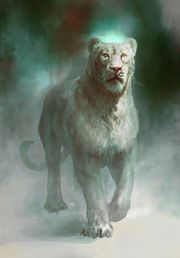 These Osẹ-bori are considered ancient, powerful spirits that bond with equally old Sev’ryn souls. Some have been around since the very beginning of the Sev’ryn race. Category I Osẹ-bori have gone through many lives with their Sev’ryn counterpart. The Sevir will pass away and return to the cycle; however, the spirit will remain to roam Idalos until their bonded has reincarnated as a new person. Category I Osẹ-bori only seem to bond with full blooded Sevir, given that the soul has a potential to be around at the time Moseke created this race. Since they are powerful spirits, they often retain an unaltered animal form. Having more experience with their bonded, the dreams that come to their Physical counterpart are delicate and gentle. A Category I Osẹ-bori will wait until their Sev’ryn partner is ready to receive them. 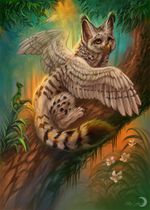 Category II Osẹ-bori are still considered Sev’ryn Familiars. These spirits were present at the creation of the Sev’ryn; however, with the small population of Sev’ryn souls at the time, not all spirits were able to form bonds with a Sev’ryn soul. These extraneous Diri desired to bond with a Sev’ryn and roamed Idalos in search of lost Sev’ryn. As full-blooded Sev’ryn began to find loving relationship with other races, these Diri began to develop bonds with half-Sev’ryn. These new souls had a lesser desire to form a bond with an Osẹ-bori and could live an entire lifetime without the bond. It is the Diri that will strive to develop the bond. The dreams that a person receives from a Category II Osẹ-bori are more earnest and sometimes frightening do to the Diri’s desire to form a bond.

The Osẹ-bori are incredibly powerful Diri that are capable of communication with their bonded. Some have been known to develop personalities over time that either mirror or oppose their bonded depending on their needs. As a bonded interacts with their Osẹ-bori, the bond will grow and the Familiar will gain additional abilities that might prove useful to the bonded. Both Category I and II Osẹ-bori can develop these abilities unless otherwise specified. Generally, these skills are related to the person’s meditation ability as well as story progression.

Telepathy (Meditation: Novice): All Osẹ-bori and their bonded are capable of communicating with each other upon the initiation of the bond through telepathy. As the bond grows, the distance of their communicating abilities grows. Initially, the bonded can only communicate in close proximity. Through In Character progression and development of the bond, this distance can increase substantially until the telepathic bond can be through buildings and several blocks over where the bonded are not even in sight of one another.

Connection (Meditation: Competent): Shortly after the initiation of the bond, the Sev’ryn or half-Sev’ryn can meld their soul with their Osẹ-bori for special adventures. This requires deep concentration and a safe place to keep the person’s body while they are having their out-of-body experience. The combined Sev’ryn soul and the Osẹ-bori will cause the familiar to take on the physical appearance of their spirit form. The Osẹ-bori and its bonded will then be able to run freely as an animal through Idalos. The Sev’ryn or half-Sev’ryn will have the luxury of understanding what an animal feels through a Connection; however, with each gift comes danger. If the body were to be destroyed while the person is having a Connection, the soul will be unable to return to the physical world. Eventually it will wither away and die, untied to Idalos through normal means.

Telekinesis (Meditation: Expert): An Osẹ-bori can eventually develop the ability to have an effect on the physical world. Basic effects may be brushing against someone that is not their bonded or creating a sound that is audible in the mortal world. Advanced effects can include jumping onto or alongside another person causing enough wind to make them stumble or fall. Many will think that this is a trick of nature and blame their surroundings before coming to terms that a spirit is playing with them. Only the bonded will understand their Osẹ-bori’s shenanigans.

Physical Being (Meditation: Master): The spirit world is invisible to the naked eye. Only when an Osẹ-bori creates a bond can these become visible to their Physical counterpart. That Sev’ryn or half-Sev’ryn is then able to see their Familiar with ease. To them, they appear to shimmer with color, changing opacity as their bodies move. When a bond is absolute and evolved, the Osẹ-bori can take on a physical form for a short period of time. This form can be used as a defensive or offensive measure by the Sev’ryn, as a communication method with another person, or as a form of status during a social event. As a warning to those that use this ability, the Osẹ-bori are much more vulnerable to attack and death in this state given that they take damage like a normal animal.

Memory Vault (Category I Only)(Meditation: Legendary; Moderation Required): This skill is strictly available to Category I Osẹ-bori and their bonded. Since the Sev’ryn soul returns to the cycle, the shared memories become locked within their bonded Osẹ-bori. These memories associated with the previous life can be unlocked only if Moseke deems it appropriate and the bonded pair is prepared for the risk of the immense amount of knowledge. Moseke will meet with the bonded pair and guide them through the process of unlocking their previous lives.

Ascension (Category II Only)(Meditation: Legendary; Moderation Required): It has come to Moseke’s attention that some half-Sev’ryn and their Category II Osẹ-bori wish to enter the cycle and serve as a purebred Sev’ryn in their next life. New souls have the option of becoming an old soul at the end of their lifecycle if they desire. While the soul enters the cycle to be reborn anew, the Category II Osẹ-bori will remain in Idalos, roaming as it had before. During this time, Osẹ-bori will go through a metamorphosis and become a Category I Osẹ-bori. Moseke generally presides over the Ascension, ensuring that the soul safely enters the cycle the first time and that the spirit is in a safe area to transform.

Although Osẹ-bori are considered familiars, not all familiars are considered Osẹ-bori. Familiars are a kind of Type 2 spirit whose purpose seems to align with the soul they bond to. All non-Sev’ryn can bond with a familiar of this group. The benefits and requirements of these spirits are often strange and shift from entity to entity. Many of these are Emean in origin, slipping into Idalos through Fractures. Others, however, have been in Idalos for a long period of time. Unlike the Osẹ-bori, other familiars do not share such a soul-melding bond. Although they can be well linked, these spirits will not follow a soul through reincarnation nor will they form as cohesive a bond as the Osẹ-bori do with the Sevir. A Sev’ryn cannot bond an additional familiar to them after they have found their own Osẹ-bori and a non Sev’ryn cannot have a Osẹ-bori at all unless granted by an Immortal.

Since there is little need for a familiar to bond with a mortal, the mortal must make a sacrifice to gain the Diri’s attention and trust. A stronger bond is made from a great sacrifices. Weak sacrifices may result in a short-lived relationship. Some may find that great sacrifices are not created equal. A man with lots of nel might not draw the attention of a spirit as his gold is superfluous; however, that same man might draw a familiar’s attention by giving up his identity. A poor woman may give all the nel she has to create a similar bond. Importance on the sacrifice is based solely by the individual and their bonded. Normal familiars do not include bonds that are created through Domain magic (Abberation, etc.)

In truth, Diri are the strangest range of spirits in Idalos. Diri from Emea and around Idalos often share little similarity apart from their core. Each Diri has a Purpose, a single unifying goal that they are driven to accomplish. Without this goal, the Diri would cease to be and once accomplished, the Diri has no reason to continue existing as it is. Sometimes this means that a Diri dies after accomplishing its Purpose and sometimes this means it evolves into another Diri, adopting a new Purpose.

As a familiar is less a kind of spirit and more the classification when a Diri enters into a bond with a mortal, their powers are widely speculated. Most exhibit some variant of powers found in Anak, but others show curious new abilities related to their Purpose that no other spirit may have.

In order to bond, often a sacrifice must be made. As detailed above, the kind of Diri attracted and bound by such practices will be related to what is given. Outside magic, a Diri will not consent to become a Familiar (even through sacrifice) without that individual somehow aligning to their Purpose.

OOC Note: Normal familiars can be attained through the Prophet Support Forum. Each individual familiar request is evaluated on a case-by-case basis for approval. Abilities will be selected by the player with a cap of 5; however, not all abilities will be approved. Ability approval will be attained based on the sacrifice that is given by the character for the bond. The sacrifice must align with the spirit’s Purpose. The greater the sacrifice, more/stronger abilities are approved. A sacrifice’s significance will be based on the character. Abilities that are not allowed include Memory Vault, Ascension, and Connection (see Osẹ-bori Abilities). This prevents common familiars from becoming Osẹ-bori.

These spirits and Immortal guides are very specifically designed to interact with mages and blessed mortals, respectively. As each spirit has a very specific Purpose, these spirits have been given very specific write-ups. Please find the list of magical and Blessing familiars below to answer any further questions on specific familiars.

Blessings can grant special familiars that resemble a Domain of their patron Immortal and protect the Blessed through their travels.