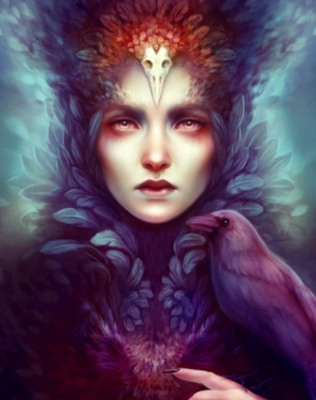 This section provides players with information on the many races available at Standing Trials. Each race has its own advantages and disadvantages so please make sure to read over the sections thoroughly. If you have not taken a look at the History of Idalos, it's highly recommended that all players read through the history for a better understanding of how these races came to be and how they tie into the storyline. Each race has its own unique history which will impact their opinions on the other races, the general opinion of individuals as a member of this race, and also how they are viewed in different cities. We will continue to update the races as the role play progresses but please do not post your suggestions about races we should create in the Prophet Support Forum.

The Aukari are a race most Idalosians love to hate. Born from smoke and fire, these people struggle each day to please their creator Faldrun, for it is his blessing that aids them in controlling their inner fire so that they are not consumed by it.

Most Known For Spontaneous combustion related to their emotions, largely hated, worship Faldrun

Specific Restrictions? Hated / distrusted / feared, they tend to be reclusive.

As a race known for their magisterial and pompous attitudes, the Avriel are winged, ethereal beings, created by Delroth who are far from kind. An Avriel can be one of the most difficult beings to get along with if one is not a member of their race or if one contradicts their beliefs.

Most Known For Winged avian race, linked with slavery (as owners), tend towards arrogance & cruelty

Specific Restrictions? Most Avriel live in / around Athart. Childhood is very traumatic

As patrons of the sea, the Biqaj are a free spirited race who hold no obligations to any deity to protect them, though U'frek created them. They journey wherever their hearts desire, entrancing others with their odd beauty and ever-changing eyes as they go.

Most Known For Seafarers. Silver blood and pointed ears, biqaj eyes change colours with their mood.

A race of small castoffs that were adopted and uplifted by Saoire, the Cadouri are a playful, often naive race that can find joy and wonder in the smallest things. They are also optimistic and tend to treat everyone as if they've been friends for years.

Most Known For Small, cheerful, new to Idalos, adorable.

Accidentally created by Yvithia, the Eidisi people are the result of failed experimentation in her quest for knowledge. It is not surprising that the Eídisi prize intelligence above all else. An unwaveringly proud race, they believe that they alone have the potential to unlock the mystery shrouding the Great Shattering.

Most Known For Worship of Yvithia and thirst for / respect of knowledge. Blue skin

Specific Restrictions? Most Eidisi reside in Viden, although this is by choice not necessity

Protectors of the wounded Immortal, Treid, the Ellune truly believe that information is power. There is only one thing that the Ellune do not have tucked away in their vast, frozen libraries: the knowledge of how to reunite an Immortal with his heart.

Most Known For Worship of Treid, protection of his body. Very tall with blue skin

Specific Restrictions? Can not tolerate heat.

Ghosts are the souls of those who were once alive, died, and refused to pass on. Like the living, Ghosts come in my shape and sizes, along with various types and tiers of undeath. These creatures typically are found with The Beneath, they are able to travel within and interact within the realm of the living through various ghost only skills.

Most Known For Spooky and dead, this race is made up of those individuals who rejected the afterlife. Live within the Beneath.

Specific Restrictions? limited interaction with the living and are tied to their anchors.

Humans are one of the most diverse races in Idalos. Partaking in all manner of professions and skills they treasure their freedom and diversity above all other things. Although at times they are manipulated by Immortals to serve their purposes, the Human race seeks the independence to act and do as they choose.

Most Known For Versatility, being everywhere, pre-dating the Immortals. The race most of the other races were created from

Noble, trustworthy, and hardworking, the Ithecals are a race of lizard people people who worship Ethelynda. They have strict rules and moral values set in place to preserve the people of their race. Anyone who has an Ithecal as a companion is mighty fortunate.

Most Known For Being big tall lizards

Specific Restrictions? Getting around can be very tricky because of their physical size.

A race spawned by the hands of Thetros, the Lotharro are an all male race with animalistic traits, incredible endurance, and a love of life, adventure, and passion.

Most Known For Being an all-male race who are reborn. Animalistic. Strong

Specific Restrictions? Past lives usually restrict which caste of society they are in.

A tribal people burdened by a void in their hearts from their creation by Chrien, the Mer occupy the oceans of Idalos. A voracious people, they are nomadic due to necessity, traveling the world as they seek to find their purpose.

Most Known For Being an aquatic species. Often attack ships.

Specific Restrictions? Need a specific skill to be able to walk on land and this is time restricted

By far the most diverse group within Idalos, individuals of a mixed heritage inherit racial traits from both their parents. Many individuals of a Mixed Race lineage can blend in quite easily with the race of either parent, however in some cases the combination of their parents’ characteristics can lead to the offspring being considered abominations. Be clear on the Rules on Mixed Races

As an all female race, the Naerikk do not take kindly to strangers who venture onto their homeland. Dangerous yet beautiful, the Naerikk are often mentioned in many songs and legends across Idalos. Audrae is the Immortal who created them and they follow her.

Most Known For An all female race whose natural form is a shadow.

Native to the Hotlands, the Qi'ora are a hardy race of craftsmen with extremely high standards of quality and linked with Chamadarst. From glassblowers to masons, Qi'ora are quick to learn and are talented with their hands. A plant-like race, the Qi'ora are wholeheartedly neutral, leaving the wars for others to sully their hands with.

Most Known For Crafters with cracked, plant like skin

The Sev'ryn is a race known for its spirituality and familiar companions. Created by Moseke they take up journeys in search of these companions, meeting new individuals and experiencing things that they later bring back to their homeland to share with their people.

Most Known For Being close to nature. Spirit familiars

A mischievous race with smiles as bright as the sun, the Tunäwä are the smallest race in Idalos, residing in Magani. They have a close affiliation with the Sev’ryn people and are bound to the forest via their unique and highly sought-after abilities, engineering some of the world’s most deadly poisons and uncommon antidotes.

Most Known For Being able to grow antidotes out of their head.

Specific Restrictions? Getting around can be very tricky because of their physical size. No magic

Everywhere and yet nowhere, the Yludih are composed of crystal with the ability to shapeshift. No place is safe for this mistrusted people who rely on the skill of disguise and mimicry to blend into the masses, much like their creator, Aelig. Their only place of safety is the interdimensional kingdom of Uleuda where Yludih learn discover their true identity.

Most Known For Shape shifters who are largely untrusted / feared

Specific Restrictions? Cannot learn certain magics, do not dream like other races.

Born of a mortal parent, these beings other parent is one of the Immortals themselves. With Domains of their own to commend, they are walkers between the world of mortality and the realm of divinity Rules on Mortalborn

The gods and goddesses of Idalos, these beings are able to grant blessings and abilities. Rules and restrictions

Most Known For Divinity

Please make sure you are fully clear on the rules for playing Mixed Race.

There are a number of restrictions on playing a Mortalborn,including a required length of time being active on the boards etc. Please make sure that you are completely up to date with these.

This category has the following 18 subcategories, out of 18 total.