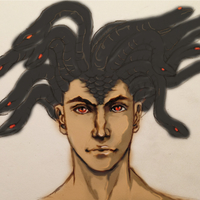 Partners: --
Appearance
Hud's warrior physique is very apparent in his large, brawny, and tanned upper body. The scales from his serpentine-half extend further than most of his kin, reaching all the way up to his pectoral muscles. Barrel chested with sinewy, thick arms, Hud is a classic image of what the Ithecal were divinely designed for: martial combat. At full length, the Raskithecal stands at a towering sixteen feet. His serpentine scales are pitch black with red diamonds on the back side; the twelve large snakes that compose his hair are of the same color. The slitted eyes of this warrior are a deep orange hue. Hud wears a black beard, which he oils and trims regularly.
Personality
At his best, Hud is calm, energetic, and confident in his demeanor; he chooses to remain stoic as best as he can. Despite such an indomitable disposition, Hud can be hostile, ruthless, and domineering at his worst. Very optimistic in his outlook, the young Raskithecal has faith that the path laid out by Raskalarn will be successful despite any obstacles in the Empire's way; he can be very resolute in pursuit of this goal. Despite all this, his sense of patriotism and morality is unquestionable and will not cast aside these ideals for the sake of conquering in the name of the Eternal Empire.

The youngest of five children, Hud was the least pushed and the most coddled of all his siblings. The Ashraf head-of-house, Mutlah, retired from active military service shortly after all his children were born; in retirement he administered to several logistical and bureaucratical duties for the government of Korlasir. The distant father, only gave Hud audience when the boy showed signs of deterrence of the Raskithecal ideals. Mutlah's wife, Sayna, was a beauty and did not work after barring children. Spending her days in the household, Sayna was the parent who bonded with Hud the most; like any good Raskithecal though, she was hard and tough on her children teaching them as much as possible. Hud's eldest brother Jorthen was already a veteran of skirmishes in the Western Campaign when Hud was just a boy. Returning home when Hud was already grown, Jorthen was completely estranged from his siblings. Hud's four elder sisters all served time in the military, though their ultimate professions turned out to be different. Nisima, the second eldest, married young and began a family of her own. Janant and Saalama, seven and five years senior to Hud, both served two years in the Legion before attending the Korlasir University.

Hud had the benefit of receiving informal lessons from his family in combat and endurance, but unlike his siblings Hud had completed no formal service to the Empire. The baby of the family had grown up slower than the rest and spent many of his days in sport and leisure. Showing no aptitude for book-learning, nor a craft, Hud was pushed to join the Legion because his superior athleticism. Despite urges from his mother, the young Raskithecal kept putting it off because of a comfy residence in his retired father's household.

Due to recent happenings with his brother Jorthen's return home and peer presure, Hud found himself volunteering into military service and was immediately shipped off to the Eastern Front.
Housing
Travelling to the Nashaki Campaign Front.
Knowledge & Skills