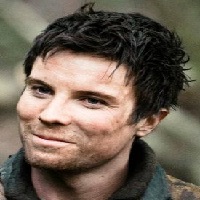 Partners:
Appearance
Iladar is an Ithecal of average height and weight, 3 feet in the torso and 7 in tail and weighing 195 pounds. He has short reddish-brown hair, gray eyes, and keeps himself mostly clean shaven. Due to his rank as a phaesty in the Yithiral Militia, he tends to carry himself with a rather military bearing even when off duty. His tail is green with a red diamond pattern.
Personality
Iladar is fairly relaxed and easy going when he's off duty, though when on duty he's more stern and can be somewhat severe at times, due to the need he feels to keep the people under his protection safe. As honor-bound as most Ithecal are, he's never one to shy away from a challenge, though he very rarely issues one himself. He tends to speak in a soft quite voice unless the situation calls for a more forceful tone. In a fight, he's mostly a defensive fighter who uses Taither in conjunction with his shield to keep his allies projected.
History
Iladar grew up in Ivorian, the capital city of the island nation of Yithiral. Growing up, he heard stories of the heroism of past generations of the Yithiral Militia, the wisdom of Aethesti Artadh, the courage and kindness of Rithu, who had won Ethelynda's heart. As he got older, he got to witness it firsthand in acts by Khazera Ivorian, Grishilda Genberte-Volanta, and the sacrifice of Aethesti Kyrau Ivorian. With all this growing up, Iladar couldn't wait to join the militia, and as soon he was old enough, he joined as a regular with the rank of Phaesty.

During the initial training, he showed an interest in cities allied with Yithiral and due to the close relations between Yithiral and the city state of Ne'haer, five years after his joining he was assigned to be part of a group of militia sent to act as backup for their ally should Ne'haer fall under attack. Despite his low rank, he was given the Blessing of Taithir by the Immortal Ethelynda, for use in keeping their allies of Ne'haer safe.

Once he arrived in Ne'haer, Iladar wasted no time in studying a map of the place so he knew his way around and taking a lodging in his new home. Though he doesn't know many people yet, he is already fond of the city, and hopes it never requires his services, though he continues to train in preparation should the worst happen.
Housing
Typical Ne'haer housing and style, as Iladar is a recent arrival.
Knowledge & Skills