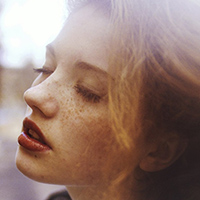 APPEARANCE;
>Ioan seems a typical Aukari, her hair very red with a subtle orange to it to hint at the fire in her veins pounding its way to her destruction. She stands at an average height for an Aukari woman, past any growth spurt that might make her a statuesque beauty, and she falls somewhere amongst the plainer women of the race. If anything, the only actual remarkable aspect of her appearance is the shade of her eyes which seem the colour of honey, warm and molten.
>Ioan has no tattoos to speak of but for the Mark of Flames which, in itself, is a subtle and easily indistinguishable mark on the inside of her right wrist, revealed only when lit by fire itself.
>Throughout her life, Ioan has acquired a fair number of thin white scars along the inside of her forearms, her thighs, and the backs of her hands.
>Ioan's breasts were surgically removed when she was younger and sure of her choice. With no shape to her chest, Aedha could freely mask her sex. It is the ideal she strives for, although in a case where she has children someday, she'll need a wetnurse. HISTORY;
>Ioan's history is much like any other Aukari: she was born to a large family, her father a working citizen and her mother a part of the Occult. At the age of five, and until the age of 18, she was trained to be a ferocious member of the Occult herself, although her particular skillset didn't include much in the way of combat as she herself was drawn more towards the path of the infiltrator and spy. She took closer to lessons of politics and rhetoric, of disguise and acting, and hugged close the idea that she could better topple other societies not by outright violence, but by the subtle use of a wicked tongue and the right sort of knowledge.
>Ioan's spywork turned her to working on the visitors to the city; maybe she may present herself as a slave, a servant, a mute neighbour to dig in another's belongings when they weren't present. She had to teach herself skills that wouldn't be taught formally to her, such as larceny, and she took to it, because it provided her the tools to get what she ultimately wanted. Ioan even took to picking and prying at the foreign language of travelers to Sirothelle, but she never really caught on to it.
>Despite a life lived getting close to other people, Ioan never really gathered any friends, and she lives a good life without them. Her strongest desire is simply to make her god proud, and in no way does that require the use of companions but to ride on the shoulder of their successes.

CONCEPT;
>Ioan is the type of woman, the type of Aukari, to want to be part of the background, the crowd. She likes to listen and to watch and, even as a child, was fond of eavesdropping and acquiring the secrets of her family, secrets that she liked to hoard. Honestly, she may have been born to spy, created specifically by the Immortal Faldrun for such a fate.
>She's a wary woman, not fond of growing close to humans and other outsiders, and yet possessing a curious drive to know them, not always in ways that they may like her to. She's passionate and fiery about her chosen craft, about her people and their culture, and about Faldrun. Her loyalty is to him, wholly and without falter, as was raised into her by her father and mother.
>Ioan is an amoral figure, she lacks maternal instincts, and she acts for either herself or her Immortal with singleminded purpose, and when not, she acts to satiate her drive to understand, her drive to possess, or her drive to destroy... and she possesses all three to great extent.
>Ioan doesn't keep any friends, at least none that she considers close. She does have people she considers useful, as she does wish to build up a large network of intelligence to work with, but none she would actually die for. Of course, Ioan doesn't like to let this be known; she likes to have people to rely on when times grow difficult for her, or for when her fire grows too hot and begins to burn beneath her fingers.
>Ioan is furiously faithful to Faldrun and to the fury of her fire.
SKILLS;