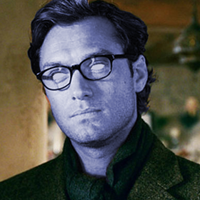 Factions Joined: None, as of yet.

Gharis is somewhat unimpressive when it comes to his looks—more so by eídisi standards—and those who know nothing of him would probably be inclined to describe him as "average" or "plain-looking". Not to say that they would be wrong; the man is neither short nor tall, standing at an unremarkable five feet, nine inches, and sports a frame that seems common amongst men his age, firm yet thin and lacking any visible musculature. He has an angular, scarcely-stubbled face that could be considered handsome, and wears glasses that he almost constantly fiddles with, as they never seem to want to stay on the bridge of his nose. His skin is a light shade of periwinkle, while his hair is much darker and combed back, ruffled in some places, and his eyes, like all eídisi's, are white and pupil-less. Thin, runic lines decorate his forehead and chin, where they continue a few inches down his throat before fading, but they aren't very noticeable.

Clothing-wise, Gharis keeps himself dressed appropriately for Viden's weather, wearing a thick, grey cloak with a fur-lined hood over a white shirt, a darker grey pair of pants, and ankle-high boots that look a bit worn and scuffed. Despite his love for vibrant arrays of color, it's rare to find the eídisi wearing anything that might make him stand out in a crowd, whether it be a hat boasting the brightest of reds or a simple, colorful scarf around his neck. If one were to gift him a colored piece of clothing, he'd wear it out of politeness but keep it hidden. Greys and browns are considered "safe palettes" in his mind.
Personality
Mindful
Gharis is quite comfortable with his position in life, and acknowledges those who "rank" higher than he does, treating them with the proper respect and reverence that he personally feels they are owed. Strangers are also treated with common courtesy and, having been hounded by his mother for years about the importance of manners, the eídisi can sometimes be overly-polite, forgetting first names in favor of last ones and declining invitations to public eateries out of a fear of embarrassing himself.


Clumsy
While Gharis isn't too well-known amongst the populace, the citizens of Viden can typically tell when he's around by the amount of things that start to fall over or break, nearby. The poor guy is a professional klutz, and can't seem to go three steps without either bumping into something (or someone) or tripping over his own feet. It doesn't help that he's almost always in a rush, though when asked about where he's headed he'll never have a straight answer to give, as if he doesn't really know.


Inquisitive
Staying true to his chosen path as a scholar and innate nature as one of Yvithia's creations, Gharis is about as curious as they come. There isn't a single aspect of life that can't be picked apart and studied, and the man seeks, almost greedily, to understand just about everything he comes into contact with, from the people he meets to the plants he tends to in his pastime. At times, his seemingly-unsatiable curiosity can make him seem ignorant and even callous toward others, but he isn't one for boasting his own intelligence, never having much enjoyed singing his own praises. He does, however, love to talk about his thoughts, theories, and findings with others.


Gullible
To a point, at least. Gharis never takes the advice of others unless he can validate it with facts, and is more than willing to politely disagree with someone when he feels that they are wrong in a subject, assuming it's one that he knows more about. And yet the man becomes as malleable as putty when in the presence of beauty, helplessly captivated by whichever attractive man or woman manages to catch his wandering eye. It's during these moments that the eídisi is most easily taken advantage of, much like a beggar teased with a satchel of coins. Beyond the occasional, somewhat awkward attempt at flirting—and a coincidental run-in at a local store—however, Gharis doesn't really pursue the people he becomes enamored with.


Tireless
Gharis is usually up and running, seemingly powered by some inexhaustable source of energy at the core of his being. He likes to keep himself busy and feels as though every waking moment can be spent doing something productive, no matter what it is, so his days are spent running errands, taking notes, re-arranging those notes, and taking a moment or two to immerse himself in gardening, a surprisingly-calming hobby. Consequently, Gharis loathes when others go out of their way to relax, seeing it as the epitome of laziness.
History
Prior to Gharis' birth, Warren Rieger had never been able to see himself as the sort who would start a family, let alone sire a child. He was a well-known scholar amongst the higher minds of the Academy; a quiet fellow, who liked to keep to himself and delve into his own, private studies when he wasn't hosting lectures for Humanities students. Warren was particularly interested in the events leading up to the Great Shattering, and would often find himself spending breaks upon breaks perusing books in the Atheneum, scribbling notes away on pieces of paper until his fingers ached and his inkwell had run dry. It was by no means a rewarding pastime, but the eídisi was convinced that he could find answers if he continued to work toward them, so he did. Before long, what pitiful semblance of a life he led was consumed by research, and he became a shut-in, his presence at the Academy ceasing to exist, only ever leaving his home to go borrow books from the library.

On one of those trips, Warren happened to pass by a group of street performers. They were small in number and, though they seemed to have only begun to prepare for a show, a few souls had crowded around them. Curious, he decided to stick around and push aside his business at the Atheneum, and was later amazed when they began to dance, feeling particularly drawn to a woman who seemed to take the lead; she moved with the effortless grace of a seasoned performer, her clothes boasting warm hues of red and orange that seemed to dance along with her, her expression one of pure mirth. When it was over he spoke with her, and found out that her name was Belita. She was only just returning to Viden, having been travelling with her companions for little over half a season. Warren was surprised when she later invited him to join her in getting something to eat, and he hesitated, but she was quick to make a decision for him. They spent the rest of that day chatting and getting to know one another; the eídisi was especially interested in how she had made a living out of dancing, and asked questions that she seemed more than happy to answer.

By the end of it, he found himself pleased with having spent time in another's presence, the library completely forgotten. But then Belita asked if they might see each other, again, and he couldn't really give her an answer, unsure as to whether or not he wanted to. The day had been enjoyable, but he had work that he needed to do and valuable lost time that he needed to make up for.

She left without asking any more of him and showed up the next morning, demanding that he take her out. And thus began the next three years of Warren's life. He learned that she was a strange woman with an even stranger set of moods that she seemed to alternate between, but was nonetheless captivated by her, and found that the feeling only strengthened with the passage of time. They were married by the beginning of their fourth year together, and Gharis came into being shortly after. Belita was overjoyed to have a child, a wish that she'd been harboring for a good majority of her life, but Warren didn't seem to know how to feel about it, other than anxious. Still, they both cared deeply for him, and Warren made it his personal responsibility to teach little Gharis all that he knew. He wanted the boy to become a scholar, like him, while his wife encouraged him to be open to all possibilites that life held. In the end, however, Gharis decided to take the path that his father had, though he quietly hoped that he wouldn't fall into the same obsession.

From a very young age, Gharis had shown an interest in the other races of Idalos, and his mother took to telling him stories of the many cities that she had been to and the cultures she'd experienced. His father couldn't really contribute, having never ventured beyond Viden's borders, but his knowledge of a few languages was as valuable to Gharis as any; he wanted to learn as many as he could, as Belita had promised him that she would take him outside of the city when he became a bit older. It turned out to be an empty promise, but that didn't kill Gharis' desire to travel for the sake of knowledge, nor did it stop him from planning seasonal trips to Sirothelle, the city that had interested him the most in his studies. He finally made it when he turned 30, treating it as a birthday gift to himself. And at first, the trip was enjoyable—he found the architecture of the city breath-taking, and marvelled at its people's reverence of fire—but once a few trials had passed, Gharis couldn't help but begin to feel as though he wasn't wanted. The Aukari there seemed wary of him. Convinced that they would expel him from the city if he overstayed his welcome, the eídisi was quick to return home, somewhat disappointed that he hadn't been able to stay longer but content with the Vauni that he'd picked up on, having spent most of his trials merely sitting and observing the city's people. He isn't too keen on travelling, now, but is still fascinated by other cultures.
Last edited by Gharis Rieger on Mon Aug 31, 2015 6:43 am, edited 21 times in total. word count: 1804
Top Gharis' once-humble abode was gifted to him by his parents, who had considered it a sort of "coming-of-age" present. Eager as they were for their only son to make some semblance of a life for himself, they half-nudged, half-shoved him out of their own home when he was 26, and offered to cover his first season's expenses.

The eídisi has since then tweaked his living space, so that it might suit his needs. Walking in, one would find themselves facing the wooden chest that he keeps his belongings in, though what few things he owns—along with whatever papers he's been scribbling on—seem to be strewn about the room. Beyond that chest is Gharis' bed, and to the left of it sits a round, wooden table with two chairs at one edge and a colored-glass bowl of potpurri at the far end, the vibrant petals and spices within them giving the room a pleasant smell. To the furthest left of the room is the fireplace. It is by no means the works of an artisan, crafted entirely from a common stone, but the eídisi likes to believe that it possesses a sort of "rustic" charm, and is pleased with the warmth it provides him on particularly cold days.
Last edited by Gharis Rieger on Mon Aug 31, 2015 4:16 am, edited 8 times in total. word count: 220
Top