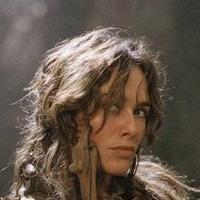 Factions Joined: None, but serves Audrae Lakia is a woman of average height for a Naerikk, 5'5", with the black hair, and pale skin indicative of her race and amethyst colored eyes. As a hunter, she usually dressed in furs and soft leathers, though when in-city she tends more towards gentler fabrics for her clothing. Unusually for a Naerikk, she is rarely seen with her face painted, since Lakia has virtually no sense of artistry and can't tell a good makeup job from a bad one. Due to the occasionally rough nature of the outdoors that she so prefers, when travelling or hunting, Lakia doesn't bother to keep herself particularly neat. However, when in-city, she will keep herself as well-groomed and bathed as Naerikk culture and honor demands.
Personality
Though Lakia does possess the usual Naerikk arrogance, she can come across at first glance to be more down to earth and humble than many of her Sisters. This is most certainly not due to humility however, but rather to the fact that a lifetime spent in the woods has made rather reticent and even somewhat uncomfortable around people. In truth, this self-imposed isolationist lifestyle of hers has left Lakia reluctant to spend much time around even her Sisters. That being said, she does occasionally yield to a deep-seated psychological need for the companionship of sentient beings all Mortals seem to possess and travel to a city to spend time with beings other than her slave, Delta Kedlyn. Delta is just about the only being that Lakia spends any significant degree of time around, as she has come to care for her in a way that many might find unseemly, despite their status difference. Quiet and largely withdrawn, Lakia does not waste words, preferring to let her skills and actions speak for her. However, when she does speak, she is soft spoken and rarely raises her voice more than is necessary, a habit gained from a lifetime int he woods. Those few who knew her parents will say that Lakia takes after her unnamed father more than her mother in behavior, for she has his gentle nature with others, if still possessing the full Naerikk arrogance and racism.
History
Lakia was born to a Naerikk hunter named Maerre and her slave, who Maerre never referred to Lakia's father by name. Her father himself never spoke, but he was a gentle man who spent his time trying to keep the worst of Maerre's foul temper from their daughter. Maerre possessed an almost psychotic dislike of other people and the little family stayed alone in the woods away from civilization unless it was absolutely necessary to travel to a city. This dislike of others extended to Lakia and the young Naerikk received only the bare minimum of attention from her mother needed to keep her alive. The only thing Lakia learned from her mother was arrogance and disdain for people of other races, and it was her father who taught her to hunt, taught her to survive on the not-infrequent occasions when Maerre would leave the two alone in the wilderness in a fit of sullen rage, always preceded by physical, verbal, and emotional abuse towards her daughter and her slave.

Her father, silent though he was, had been able to teach Lakia though example and guiding his daughters hands during her early years. Though such methods, she learned to read the trail left behind by prey and to tell the den of a predator from an empty cave. She learned to use the bow he had made for her and how to slip through the forest as though she was a creature of the woods rather than a mortal intruder. Though an unskilled rider and archer, her father was even able to teach her how to fire a bow and stay on a horse, though firing a bow while on a horse proved beyond her abilities and she never really bothered to learn the technique. When she reached her 13th arc, he even made her a longbow of her own, for Lakia's mother had first purchased him for his skill in woodcarving and bow-making. In time she learned to skin and cook the animals she hunted so that she could feed herself and her father when her mother was off on her own.

It was during one of those times, when Lakia was about 15 arcs old, that she was orphaned in one fell stroke. Maerre had gone off on her own in a fit of sullen rage and Lakia's father, now that the young girl could effectively survive on her own, had pursued her. Usually, Maerre's fits only lasted for a a few days, never no more than a week, but Lakia waited for a little over two weeks for her parents to return to their campsite before she finally, in a state bordering on panic, when hunting for them herself.

It didn't take her long to find them, for they had both been set upon by a great bear. Maerre had been taken by surprise, not paying enough attention in her anger to notice that she had gotten too close to her cubs. She had been killed instantly. Lakia's father had taken more time, as he had come upon them aware of the bear, but not know that Maerre had been killed. The gentle man had fought to save his cruel and abusive master, but was ultimately killed by the great bear. Lakia mourned her father and buried him in the forest with the respect she felt he should have gotten in life. Her mother, for whom she had always possessed a strong dislike, she burned and shed no tears for.

Following the death of her parents, Lakia journeyed to the Naerikk city of Augiery, where she met her long-distant aunt, Briene, who continued her education in their culture. However, despite her best efforts, Lakia was never at ease in the city and she soon found herself spending more and more time alone in the woods. Despite her preference for the quiet and solitude of the woods, Lakia knew that it was unhealthy for to be so completely isolated. Thus it was that Briene, who understood her niece's need for the solitude of the woods, purchased for her a young slave to assist her in the woods.

This slave, a half-Biqaj named Delta Kedlyn, became Lakia's constant companion and the hunter taught her things that they might not have learned from other masters. She was, remembering her mothers cruel nature, reluctant to use physical methods to control her slave, instead preferring an addictive substance named Psinia that kept her mind mostly clear, if incredibly passive. In time, at least from Lakia's side of things, an odd companionship formed between them. Though they could, perhaps, be properly called friends, Lakia does care for Delta, and would protect her even at the cost of her own life. In time, she would also purchase a brown horse by the name of Tam to pull a cart carrying all their gear, and a Black Labrador named Fido to serve as both a hunting companion and company for both women.

Now the little group travels from city to city, spending most of their time in the woods. The fruits of the hunt sustain them, both in terms of food and in terms of finances, and Lakia is at peace with her existence. Though she, like all Naerikk, is aware of the titanic struggle between the Immortals that rule Idalos, she herself has little to do with them, for in her mind the woods are more eternal than even the greatest of Immortals and it is the wilderness that has laid claim to her destiny.
Housing
Since Lakia lives out in the wilderness, her usual home is a dark green tent large enough for two people. Since she tends to stay in one place for a while, she usually has time to set up a sort of temporary home. Usually, this means the tent is set up on top of the tarp with the torches set in a circle around it.
Knowledge & Skills