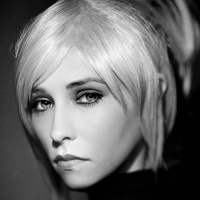 Rizoel stands at an imposing six feet and seven inches tall. Her pale bluish-gray skin is slightly colder than average human body temperature thanks to her half-Ellune physiology. Blonde hair is kept at a medium length, often tied back into a practical ponytail. She is almost too slender for her height, weighing a total of one hundred and sixty pounds. Her ice blue eyes have no noticeable blood vessels marring their sclera and their pupils are slightly lighter than black. Most of her physical appearance is similar, if not identical to, her mother's appearance.

Most days, Rizoel wears white or light shirts and leather pants. Leather clothing is a habit picked up from Treidhart, where most if not all Ellune wear leather. Her hair is kept neatly brushed but tied behind her head when she is reading or doing hands-on work in the research laboratories. On more hectic days, a stain or two may be seen on her shirts and her hair is often windblown in appearance.

Though her hair was not naturally blonde, she was involved in a chemical accident during one of her early years in Viden that caused all the hair on her scalp to fall off. When it grew back, it was almost totally devoid of color. Only a slight blonde hue is present to speak of hair once dark like her mother's. Her father's hair had been blond all his life, and the tangible link she now shares with her father greatly pleases Rizoel.
Personality

Frigid
She will not hesitate to correct someone she believes is wrong. This can lead to the impression that she doesn't care for the feelings of others-this impression is completely true. Social pursuits bore her.


Detached
Rizoel has no connection to her own feelings and as such gets very frustrated by her own emotions. When truly upset, she has been known to throw childish fits in a manner greatly resembling a toddler.


Stubborn
Failure is not an option for Rizoel and challenges are completely irresistible. Should something interest her, she will throw all the resources at her disposal behind it. In the case of research projects, she will read until her eyes can stay open no longer, often forgetting to take meals.

Early Days
Treidhart, Oscillus. This is the place where Rizoel can point to as her place of origin. She holds fond memories of the frozen town.

Her mother, Allena Tikova qalar-Treid, was an Ellune diplomat of sorts. She greeted visitors to the city and ensured they were settling in its frozen ways wells enough. This was how she met Malashaí Callasiun, a former Eídisi professor who had recently retired from his position at the Academy and moved permanently to Oscillus. He was almost eighty arcs when Rizoel was conceived; her mother less than half his age at thirty-one arcs. The cycle after, he passed away of a sudden heart disease. To Allena's chagrin, this was when she discovered her pregnancy. Allena carried Rizoel for a total of an arc and two cycles, due to the Ellune's slow gestation period.

From an early age she was a quiet child. Most of her time was spent with books and not with her peers. What time she did spend with them was mostly forced-the full-blooded Ellune children saw her as strange, and she was the only half-Eídisi many of them had met. She remained friendless until the time she left Treidhart.


Adulthood
At the age of twenty arcs, Rizoel left Treidhart for the city of Viden in northern Idalos. She took a page from her father's book and spent a vast majority of her time in the Academy's library before securing herself a job at the FRA. Originally, she specialized in research on the Ellune, but as of Ymiden 715, Rizoel seeks to join the team of researchers studying Treid's body. Rizoel's cottage is a sparsely-furnished, tiny little home in Viden. The only things in her house are a table, pair of chairs, bed, chest, and a fireplace. Her table is always set-though she rarely entertains guests, she believes it's always good to be prepared. The only luxury she allows herself is a small potted white saxifrage plant placed in the middle of her table. It's a reminder of her Ellune heritage and is named Allena after her mother.

Her home is located about five bits' walk away from the FRA, her place of employment.