Moon travels to Knome to 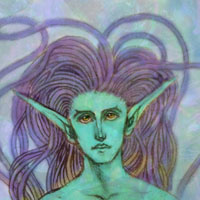 Cylus, 3rd to 10th Trial, 717 Arc
Part one
► Show Spoiler
In part one Moon was a type 4 mer with legs but I requested to have my form changed and it was accepted by nymph and Rumour. I hope that isn't too confusing
Thin red ribbons of blood leaked from the fresh wound Moon received from the wretched Avriel. Moon harvested a few strips of sea weed dangling in the glimmering waters to stop the bleeding, the last thing Moon needed was to attract blood thirsty sharks to finish the job. Although at least Moon knew how to deal with Sharks, he knew nothing of the lands dangers. The Mer believed that the land was a safer place but the shadows still wreaked with just as much teeth and claws as the sea. With how disoriented he became on land, Moon might be in even more danger there.

Even with that in mind, Moon still needed to discover what was in the mysterious chest he uncovered and was certain the surface world was the only place it could be opened. He was rejected from Andaris already but the guards at least left him with some direction. Krome would be the next place he would have to go, Moon had never ventured there but it was commonly known as the most welcoming to Mer. Long ago one of the human locals fell in love with a Mer, the details of this event were lost to time but the peaceful relations remained. However, This Mer friendly city was not near the sea but down the Zor river between the Krome and Adaris coasts. Moon had journeyed past the end of the river on trips to the Krome caves to record notable stories on the walls. He hadn’t gone to the caves often but the giant Eels made each trip memorable.

He could already feel his land lungs straining to breath under the water, a clear reminder that he needed to change his form to accommodate. He swam to the surface to get a much needed breath of air as he scanned the horizon for any notable landmarks that would help him find the grotto he transformed in. His poor eyesight was not helping the situation at all but he swam towards a formless blob that looked familiar anyway. As he got closer, things made sense and he was able to recall the location of the under water access tunnel. He took a deep breath and swam down through the hole and into the very cramped space within.

There was a very small air pocket for Moon to use, so it made the process all the more difficult. He held his head awkwardly so he could get the most air as he tried his best to focus on the slime production. Not an easy task but the dangers of being in his land form too long made it imperative that he stuck with it. Nearly the entire trial he went without food and only focused constructing his cocoon. He worked diligently collecting the slime that slowly secreted from his open pores and forming it into a ball. It wasn’t until much later that night that the structure was complete and he was able to slip inside.

Moon waited in the cocoon fro several trails, awake but in an almost dream like state. He could feel his body twist and contort but even when his leg bones began to erode he only felt mild discomfort. It wasn’t until he was able to slip through the cocoon with his tenticles back in place that his hunger set in at full force.

Moon felt like his intestines were twisted in a knot and even a rock looked appetizing to him. He was far to tired to catch any fish so he jammed his mouth full of seaweed and took the time to reapply a fresh bandage for his wound before swimming farther into the ocean.

To prepare for the long trip Moon needed to rest and the locked door of his ship was the most ideal location. With the chest under one arm and his spear clutched in the other, moon had to swim his way to the ship using primarily his lower body and abdominals. By the time he got to the ship after swimming for nearly an entire day with little rest, his tenticles and stomach felt like they’d been pummelled with rocks. When he finally managed to swim to the locked door of the ship cabin, he juggled his belongings and used the key tied around his neck to open the lock. Once inside he locked the door from the inside using the same lock. Moon carelessly dumped the chest and spear on the floor and collapsed on his tattered mattress.

When the Mer finally woke up, he could barely move his tentacles or sit up. The tired muscles from the prior day were now painfully stiff, making Moons plans of traveling again seem foolish. He didn’t like the idea, but Moon would have to give his body at least a full trial of recovery. Moon was worried his wound would be what slowed him down but he barely noticed it. Moon took off the seaweed bandage and saw only mild inflammation, he would still keep an eye on it but his muscles were more of a concern. Moon winced as he attempted flex his tenticles, but even the smallest of movements hurt quite a bit.

Moon laid back down and focused on his breathing, hoping to inspire mind over matter to deal with his pain. If his mind was calm enough it could hopefully focus more on his environment and less on his aching body, or at least that was Moons theory. After he felt in tune with the air leaving his gills, he focused on the flow of water around him. The waters were still for the most part, but even the quietest of waters had a gentle flow to them. The concept of time was lost as Moon became so relaxed he went back to sleep.

Moon was only woken up by his stomach growling with hunger, a reminder that Moon hadn’t eaten in quite a while. He struggled to pull himself out of bed and preformed another quick stretch to loosen himself up. Moon grabbed his spear, exited the door and swam toward one of his hunting grounds. Moon didn’t bother to go the extra mile and swim to the best location, just the closest. The hunting ground was good place to get a quick snack, but Moon would have to work harder to get a meal. A few small schooling fish were unlucky enough to find their way down moons throat. It seemed like the Mer only became more ravenous the more fish he swallowed. He was far too slow to catch his fill and instead had to rely on seaweed. Seaweed wasn’t bad but paled in comparison to a nice meaty fish.

Moon swam back to his ship and slept the rest of the trial away only waking up briefly to stretch. When the sun risen once more, Moon felt considerably better. His muscles were still stiff but completely manageable. Moon had learned his lesson from his trip to Andaris and was willing to dedicate time to rest on his second outing, even if it did draw out the trips length.

If moon were being honest with himself, he would realize that it was probably best if his journey was dragged out. The Chest could simply be a burden with nothing worthwhile inside, but as long as it remained closed Moon had a purpose. With a purpose, Moon was doing more than simply surviving in the cruel ocean all alone.


Moon prepared himself for his journey by attaching strapped bags around his waist, grabbing his spear and the chest. The chest was just small enough to fit in his front bag, which made things considerably easier. Swimming with a spear long distances was hard enough but the chest would make things nearly impossible. Moon wasn’t even sure how long the trip would even take but he likely wouldn’t be able to make another cocoon for a while anyway. Moon was told when he was young that he should wait a while between transformations since a body needs to replenish itself. Moon wasn’t sure how long that was exactly but it was likely a good while, it worse came to worse he simply wouldn’t be able to do it and could spend more time getting to know the area. He wasn’t planning to have another run in with a Avriel, or any thing dangerous for that matter.

Moon swam in the north west along the Rymere coast, Looking up every so often to get his bearings. He still had to make a few detours after realizing he was going the wrong way. He also made many stops to catch as many fish as he could which also meant quite a bit of breaks to let the food digest. It was clear that this was going to be a long drawn out trip but that was half the fun, he just wished he had someone to join him. Especially if that person was Azure..but memories wee all Moon still had of him,
Last edited by Moon on Tue Jun 27, 2017 1:45 pm, edited 1 time in total. word count: 1575
Top Fame: -2
Sorry, but Andaris guards will not speak highly of you.

Injuries:
Still the same avriel wounds as in part one.
Nothing new anyway.

Loss, Loss, and Devotion:
Nothing to speak of

Comments:
I wanted to be sure to send some Mertamorphosis knowledge your way.
I know you'd made your PC long before that skill was modified.
A bit of verbal clumsiness. But nothing that made me have to go back over it to understand. Nothing to dock points for.
Sample: "...the shadows still wreaked with just as much teeth and claws as..."
"wreaked" is not effective by itself. It would be like saying "the shadows caused with just..."
And you would say "...just as many teeth...", not "...just as much..."
Still, a very enjoyable read. It gave me nice cozy underwater feel as I read it.