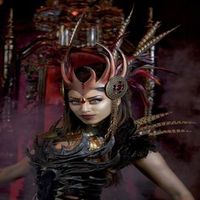 Short for a woman, she has a slender almost delicate build of someone who might not be the hardest of people, with little almost bird like bones and narrow shoulders and waist. She has the has the light olive skin tone of some one who did not spend a lot of time out doors, and her hair is a rich brown and reaches to her middle back when she wears it down. She has large almond shaped eyes in a dark blue in color almost looking grey in some lights. An up turned nose and slightly rounded chin make up the rest of her face. Below her waist her serpent like body is small and slender as well, the scales fading between dark green and black.

When it comes to clothing she tries to wear what is practical, although she is careful to make sure it is well maintained. Most of it is fairly loose fitting cut more for comfort and durability rather than fashion. On her right wrist she wears a beaten copper bracelet, which is the only piece of jewelry she tends to wear.


Personality
Luna prefers to keep in the background as much as possible. Experience has taught her the less notice she gets the better off she is. With this in mind she rarely raises her voice and would rather allow eyes to pass over. Her focus tends to be on day to day life rather than any future concerns as most of her days is often lived from one hour to the next despite her lack of formal education she is rather curious about other places and will often speak to travelers about their homes.

Luna's life might had been different if she were born to another mother. She might even have kept her name, Tlacotl. As it turned out she was not, and her mother was a brothel worker who died not long after her birth. Her mother dying just nine days after her birth due to complications of childbirth. Having no need for an infant but not wanting the blood of child on her hands, the madame left Luna on the door steps of a religious order who thought it was part of their mission to take in orphaned children.

It was here Luna gained her current name, having no name for the tiny child left in their care, and having to call her something, Luna was born. She was lucky in so much as the order was not cruel to their orphans which was often the case when there is no one to look in on their charges. However, they were underfunded, and the children grew up in a very spartan life style simply as a result of making ends meet.

They never starved, but there was really meat and their rooms they shared with a few other children were often drafty and cold. Heating being an issue in the winter months.As she grew older Luna to be more attractive to some, it was at this point she caught the eye of a young wealthy man who had nothing better to do with his time. Looking for a way out she went with him, and soon became pregnant herself. Much like her mother she nearly died.

However, Luna recovered and although her reproductive ability was in tact, doctors warned her she was taking her life in her own hands should she have other children, she would also likely have bouts of sever stomach cramps from time to time. The young man for his part was willing to take in his bastard but had little need for Luna any longer.

Not wishing for her to be completely homeless he paid her a small amount of money for the child, enough to allow her to not starve. However, it was no secret what had happened to her and why she had left her home. She found herself shunned by society, it was one thing for a wealthy low ranking noble to have a fling it was another for the common woman he had, had it with.

At first she lived off the money she had been gifted with, if she lived very modestly it would last her for some time, she was used to having very little after all. However, as time went by it became clear she would have to do more to support herself. Her health had become delicate and her condition seemed to flair up more when she was going without, perhaps brought on by stress.

To that end she began to look for work in the hopes to provide for herself and hopefully stabilize her health, as well as save enough to move on to some where her past reputation is not well known.

This is the text.
Skill Point Ledger

Record all of your Skill Point Expenditure here. Include your starting package.
Example: