Talisa and Genuvah join forces to pursue a bounty. 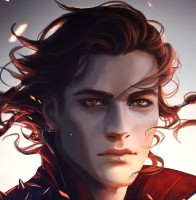 Bounty Info
Bounty Name: #3 Nellie's Bane Claimed by Talisa Tawfeek
Location: Almund
Details: A number of the workers at Nellie's, a brothel in Almund, have been attacked on their way to or from work. Each time, the individual has been badly beaten and their face cut. Descriptions of the attackers have varied, leading authorities to believe that this might be a small group.
OOC Requirements/ Notes: Multiple threads required
Hazard Level: High
Timeframe: Ongoing
Pay/ Reward: 200gn for information. 300gn for information leading to capture / arrest.
Additional Info: PM Peg for information before starting this ~ thanks!
Date: 22nd of Cylus, 717th arc

Genuvah had made many expenditures during his travels across the island. His meager pocketbook was hurting, and he wasn't sure how much he'd have to pay the tailor, Talisa. Nevertheless, he was willing to make a plan with her, whether that involved taking out a loan to pay her or some other arrangement or exchange of services. So he went into O'Rourke's tavern where he'd sent word to her that they should meet, with some amount of confidence that they'd be able to work things out.

He'd taken to haunting the place for a day or so prior to then, even though it was the Sapphire Inn he was staying at, in fact. This time, instead of wearing his plain clothes, he wore his full armor get-up, rude though it was to enter a tavern wearing armor that made noise everytime one made a slight movement. Nevertheless, he wanted to put on the appearance of being a watchman, so Talisa would know who to look for, at least.

So there he waited, and put down a few coppers for some ale, so he wouldn't be kicked out for being a loiterer.

When the drink was brought to him, he sipped on it in small increments. His other hand tapped fingers on the table. Although he was quite capable of hiding his impatience and nerves, he felt it was appropriate to put on the behavior of being slightly askew so as not to invite people to intrude at his table.
Ledger
-1 sn for mug of ale
word count: 376
Top
Post Reply Request an XP Review Claim Wealth Thread
1 post • Page 1 of 1