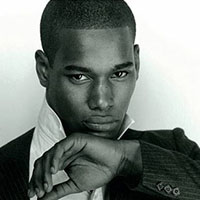 Partners:
Appearance
Xan is a 6'2 (183 CM), dark, mahogany skinned young man. He is an average built lad, leaning towards whipcord muscular. He has a fine facial structure with full lips and dark eyes and somewhat bent nose from a brawl that he would assure you that he did not start. He typically keeps his hair closely cropped or shaven and has a penchant for wearing a hat and respectable clothing. Cleanliness is important for a man in his trade and heritage, so his clothes tend towards the clean and pressed. Both earlobes are pierced but he rarely keeps any adornments anymore.
Personality

Xan is a bookish, pedantic person with a need to correct others over trivial matters. This is fairlyy annoying to anyone with a lesser education than him, and even to those calmer souls who do have a greater education. If one were to overlook the small-minededness that he obviously exudes, that person would find a gentle, kind soul who is generous with his time and money. He views education and using one's mind is the best way to solve problems and that violence is never the answer. He does have some social grace and he does know when to keep his mouth shut (usually), especially around the rougher neighborhoods and bars. However, and like many native Rharnians, get some drink in him and he is chummy and earnest as the best of them, though he will try to sing for you, badly (music will never be his strongest suit).

He has a keen mind and vivid memory and is known to immerse himself into projects to the point that he forgets to eat. Despite this, his personal mantra is that a healthy body leads to a healthy mind and is thus not afraid to spend time outside exercising or practicing weapon fighting. It is often when he is tending his body that he gets his best insights to difficult problems.

Academically, he is fascinated with Life and Chemistry and what makes up the world. He keeps a small garden and loves his plants, he doesn't even mind getting his hands dirty if it means tending and studying his garden.
History

Xan is a third generation Rhanian. His grandparents immigrated from Rhakros and the jungles surrounding there. His grandfather Atlahua, himself a son and grandson of a brewer of brandies and rare wines from the fruits of Uzkernian Jungle was at one time, a devotee of the underground religion of Aiséirism, and would often smuggle cures and life giving antidotes through his alcohol. Whereas his grandmother, Ix-Jani, was a much darker figure. She was a devout follower of Serga Mavranu and brilliant chemist. She threw herself into work into making insidious poisons and euphoric drugs. Doing what she viewed was work in the name of her beloved immortal, Lisirra. In religious fervor, she volunteered her self to be experimented upon and was lost. Mutated and sanity broken, she escaped her confines and fled blindly, eventually subdued by Atlahua and his group in the forest. Using a Wyndavi Wish to clam and heal the poor woman turned beast, the Aiséiri followers there begged a boon from Moseke. Usually, the ritual would not work unless the afflicted was committed to all that Moseke stood for, but Moseke herself saw something in the woman, so dedicated and driven. Deep down, all the qualities that made a wonderful healer were in Ix-Jani, and truly, Jani loved life. So she was given the chance to prove it. Atlahua, was stricken with a sickness at that point, a sickness of love and infatuation with Jani. He cared for her while she recovered, talked with her, and quickly, Jani fell for him.

Fully healed, Ix-jani and Atlahua returned to the city. Ix-jani, secretly converted to Aiséiri, was seen to be less fervent a worshiper of Lisirra, despite what was assumed to be a healing by her Immortal graces. Regardless, Ix-jani, the brilliant chemist was back, making drugs, poisons and antidotes. Atlahua soon proposed publicly and they were married. Not long after Ix-jani was found to be with child. Fearing for her unborn child, she convinced Atlahua to leave the dangerous city and find safer, friendly lands. Atlahua, using his many connections with merchants buying his wine and brandies, smuggled the both of them out of the city. Whereupon they made their way to Rharne.

It was difficult to start in afresh in a city filled with people who look so unlike one's self, but the two were driven to survive. Atlahua started up a brewing business again, now in intense competition with the locals. Ix-jani had her child and two others. Xan's father, Séneca, and his aunt Ix-Chitl and uncle, Tanok. Xan's father grew up as brewer himself, specializing in liquors and caught the eye of a local girl Vivian Grey who was the daughter of a rival brewer. Despite his dark skin, or perhaps in spite of it, Adok Grey, Vivian's father was receptive to the union. A short courtship and a happy engagement, the two were bound together and soon would have Xanoltl and his brother Ikal.

Xan, the younger of the two brothers, grew up steeped in the culture of brewmasters. He would, however, not inherit either the Grey's brewery or his father's. Both of which being destined for the firstborns of their respective lines. Despite this, the younger brother of Séneca's sons was not bitter, instead spending much time with Ix-jani and Adok Grey, learning a fascination of chemistry and brewing. How fermenting and cooking so paralleled chemics and alchemy. Instead of just being a first rate brewer like Ikal, Xan sought to mix Alchemy, Chemistry and Brewing to create truly interesting infusions.

At his majority, Xan also insisted on being taught not just Alchemy, but a proper magic as well. His mother, being a fairly more connected in the city, set up a mentorship with a local Transmuter. However, she was worried of the consequence of what might happen should the initiation fail. She grew fearful that she might lose her son. Xan would not be deterred and stubbornly pushed ahead, enduring pain unlike anything he ever felt before. He was alive,
but altered forever from what he once was.
Housing
Where do you live? Describe your room/environment and what you have— furniture, decorative items, maybe even a pet?
Knowledge & Skills

Alchemy - Infusing Alchemical effects into drinkable Alcohol
Chemistry - Differences between Exothermic, Endothermic and Isothermic reactions
Brewing - Composition of Common Ales and Beers
Herbalism - Proper Identification begins with Visual Traits
Transmutation - The Artistic Steps of Transmutations
(let me know if any of these are too vague or too specific)

Record all of your Skill Point Expenditure here.
Example: