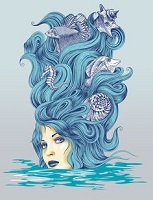 I just have a few quick questions that on Webspinner things that need to be eLabraeted on.

1. How many kids does Labrae have at a time?
2. Does she keep them around her as she travels? How does she provide for them?
3. What age does she generally take them/return them to their parents?
word count: 56

Hey, sorry for the delay! Thought I already answered these. =/

1: Varies, but the general average is about 10 younger children at a time, same for older children she raised. Older children who come to her at about 10-14 are handled on more of a case by case basis.

2: She does not. Sintra has an island south of the Western Continent, in the same general region as Strosdyn. Labrae's children live there. As for how she provides for them, a few of the adult Webspinners make keeping the island stocked with supplies their full priority, generally acting as merchants and such.

3: She generally prefers to take children as young as she can, but she goes up to 14 or so. When she returns them to her parents varies depending on the child, but usually between 16 and 18.
word count: 142