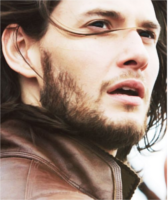 You can call me by my PC name, Lyk or Lykata (used mostly on online gaming). I'm not very good at journals, but I figured it would be nice to have a place to put down some thoughts that cannot be squeezed into my plotnotes. I think this journal will mostly be about Standing Trials stuff, but who knows, I'll probably end up sharing a lot of random stuff about my life.

Current Accounts: Only Navik and consuming a lot of time already

I got pretty lengthy on Navik's Plotnotes, talking about his personality and my goals for him. But because I can write and talk endlessly about those kind of things, and because there is this Cylus Challenge (yeah, I love challenges and I love medals and I want them all), this first entry will be about him.

More specifically, about how I came up with him (I think I have an unhealthy love of reading the process creation behind any fantasy lore/character/etc...)

I usually hate to play good guys. Every time I think on the long run, of playing a character that is a healer and wants to make the world a better place, I get bored. Not of reading it (I do love to read about characters who overcome their own weakness to help others), but of playing and writing about it. So my usual characters are the ones that start as good and get corrupted along the way.

However, I also like to punch my brain and create characters that make me utterly uncomfortable to write so I can improve myself and bring diversity to life. Or something like that.

Navik was a punch in the brain.

I saw the Order of the Adunih, and I wanted to create a character for it. Not someone who was all good and all nice (because where is the fun in that?), but someone who wanted to be all good and nice. So I started to look at the races to see which one would be a better fit. The Sev'ryn caught my eye because of their spirituality (and because I love familiars as well), and it would be a perfect trigger for Navik to wish to be a better person. However, I also needed a reason for him to not be the person he wanted to be.

Some other races came along and I ended up deciding for a half-Avriel, that would have to fight a lot against his inner turmoil and instincts to be able to finally become good in his own eyes. The Naerikk was a strong option as well, but I was kind of tired of writing female characters, and a mixed race brought with it more prejudice and more possibilities for obstacles.

After I had chosen his race, I proceeded to make him basically a walking bird. Ok, I'm joking. But during his early ears, he was very susceptible to his instincts, both because there wasn't really someone to guide him through it (someone who understood) and because he was totally alone when he finally left Desnind so he wouldn't harm anyone there. It made him frightened of being completely by himself and it made him frightened of himself and what he could do.

Now that I think about it, Navik is actually pretty damaged by the experience. It should take a while before he can trust himself fully again. But that's part of the fun. Taking him from his current state of mind and making him believe himself worth of something. And the Order is supposed to help him with that - once he gets a mentor who can teach him a few things and once he sees how he is helping people.

I think my goals for him and his goals are very similar. Navik wants to be better, to be someone he can be proud of. It's very different from what I normally do - my characters often want to be someone others will feel proud of. While Navik does want to make his friends and father proud of him, it's much more a personal journey to become and be better than to actually get other people's recognition. If that makes any sense.

After so much babbling... Onward we go, meeting people along the way and throwing some curses in his path to make things more interesting. Because why not.