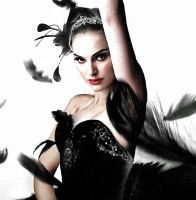 Partners: None
Appearance
The blood of Labrae is evident in Thana, as her black wings are like that of a crow. However, the resemblance doesn't end there. Thana has blood red eyes that pierce through everyone they look at, sharp and aware - vicious. Some find a beauty in them, how they resemble an animal so deeply, but others just see something worth fearing. She has beautiful brown hair that she pays little attention to, meaning it can often be wavy and natural instead of done up well. Her face is deceivingly delicate and pretty, but those who see her in a battle or fight will know otherwise. Underneath her skin is an animal waiting to be released, blood-thirsty and craving the fear she can bring to people - hoping to one day become as powerful as her mother.
Personality
Thana has two resorts to a problem - aggression and conflict. If the first doesn't work, the latter normally does. So long as she has no issue, she can keep her aggression to a minimum, but the second somebody causes her a problem she will do everything in her power to tear them apart mentally then physically. She gets glee from watching people cower in front of her with fear, believing that nothing is more humiliating for the opponent than to lose the fight before they even start it. When she isn't in a fight, however, Thana will say it as it is. She does care for those she sees as family, however, and will protect those she cares for with her life.
History

Being born to Labrae, mortalborn of Crows, was a fitting position for a half avriel. When she was born, the Scarecrow had hopes that she had created what might be a true webspinner - and a force to be reckoned with. Thana's birth was seen to be a blessing on Labrae that Sintra herself would appreciate, so long as the child was raised well as they normally were. This did, however, mean she was taken away from her father. She traveled with her mother whenever it was needed. This meant that by the age of five she was training alongside her mother. But unlike the abducted children, Thana had no need for brainwashing. Her devotion to Sintra was near to guaranteed from birth, and her appearance showed it. Blood red eyes paired with black wings made her status clear - there was no doubt she was the daughter of Labrae. However, to both Sintra and Labrae's disdain, she didn't develop abilities like the other two had. She was near to entirely mortal, the Immortal blood too thin to do much to benefit her at all. It didn't prevent the two from loving Thana like family, but it made her weaker. If they wanted her to become strong, it would be through training and hard work, something Thana soon learnt the hard way.

When her training began, it was simple. She was taught how to fly moderately well, enough to give her an upper hand in some situations. She was also offered the choice of weapons, to which she was attracted to a flail. However, she had little strength at that age, so couldn't hope to use it. She didn't know what the choice meant, but it would define her role, and her choice didn't disappoint. A training flail was obtained, lighter and easier to use. Labrae, however, couldn't train her - so left her teaching in the hands of another webspinner. Her teacher new, however, that this child had special privileges above the rest. While the others should be trained well, Thana had to be. As a direct relative to Sintra herself, power was not an option - it was a necessity. So the teacher started training his students, giving private classes to Thana on top of the group work. Within two years, Thana had learnt all she could from her tutor, her training reaching a standstill. But it was enough, she'd developed enough strength to use the weapon to a standard that Labrae hadn't forseen for a seven year old. However, her training had thus far been limited to a training flail, and she still wasn't strong enough to use a real one. So Labrae directed her training elsewhere, postponing the training she would do with a flail. She knew, however, that trying to teach a child strength training was near to useless - at this age at least. She would have to wait. So it was time to consider the issue of power. If Thana couldn't be half immortal, she'd just have to be mistaken for one. That meant two aspects, to Labrae - attack and defense. She had to decimate her opponents while making herself invulnerable.

Labrae sought the advice of her mother, Sintra, before reaching a conclusion. Thana had two traits missing that, if remedied, could have her mistaken for that of pure Immortal blood. The first was her physical aspects, she needed something that made her powerful in that regard. Able to use her weapon well, above that of even immortals capabilities. The next would be 'pure' magic, and if her physicality was to boost her weapon then the magic would be to make her untouchable. After consulting with a few web-spinners and Sintra herself, they decided on Amplification and Abrogation. Her training was to start immediately, and so the girl was put through both initiations immediately.

After the first initiation, two Arcs passed until her second, leaving Thana at the age of 16 Arcs. she had her magic at a level that needed work, but it was a start. By now, she had realized what her goal was and why she was doing it. She'd never truly understood why Labrae treated her like she did, all she knew was that she was special. But referring to Sintra as a grandmother as well as a leader was the difference between her and the other children. It was at this time Thana started to develop her own goals. She wanted to be as powerful as a mortalborn, no doubt, but that was a goal that would come with another. Her own personal goal: Power. Seeing how Sintra and Labrae ruled inspired Thana, making her want the power. However, she had also worked alongside the other children and seen what a team could do - meaning she wanted to rule as a unit. Whether she was the main ruler, or one of the many puzzle pieces, she would one day rule over a domain of her own.

At the age of 18 Arcs, Labrae approached Thana and told her that she had been hiding something from her. All the other children, she said, had to kill their parents once they reached their teenage years. But Thana hadn't. When she first heard this, Thana panicked - thinking that she was going to be asked to fight her mother.
Labrae then told her otherwise, that she was to find and kill her father and take his house. She was guided to Etzos, where he stayed, before being left to her own.
Labrae made sure that she knew she wasn't alone, and she could pray if she needed for her to come, but for now she was to walk her own path. Thana made her way to her fathers house, greeted by an Avriel. The similarities were there, and he immediately noticed them. When he answered, his eyes were filled with delight. She was welcomed in for a meal by the man, who was somewhat frail. His house looked bland and cold, showing his isolation clearly to Thana. Normally a person would feel sympathy, but Thana was here for a job.

After giving him the courtesy of sharing a meal, albeit an awkward one, Thana stood herself up. Throughout the meal she had remained silent, so the shock of her standing was evident on the man's face. She knew the man was no match for her, and normally she would give no consideration and would just kill. But this man was different. She'd been trained for this moment, and he was the reason she came to life. Despite knowing he had to die, and having no attachment, she felt as if she owed him. Because of him, her dreams of power could one day become a reality. She then informed the man of her mission, to which he sighed and lowered his head -tearing up. He looked up to his daughter, crying and begging for mercy, asking if there was any other way. Her flail entering her hand gave him an answer. As he opened his mouth to beg again, he was struck down. Without waiting, Thana pounced on him, beating him with the flail until he stopped moving.

Thana cleared out the mess as best she could, Webspinners being summoned to assist her. The house was now hers, and Etzos was her new home. Now, she settles there, waiting for a clear mission. In her head, Thana needs power - and by Sintra's name, she will get it.
Housing
A simple, small house in Etzos. Nothing is extraordinary about it - and Thana hates it. She doesn't have a particular problem with the city itself as it gives her a place to train and fight, but she would rather not have to live there. City life isn't for her. She is currently seeking a new location, but doesn't know where. Perhaps somewhere on the outskirts...
Knowledge & Skills
[anchor=marks][/anchor]

Record all of your Skill Point Expenditure here.
Example: