Gangui descends out of the Warrior Wood into Eztosian Lands 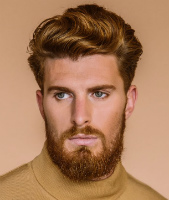 The light of the brilliant suns broke through the shadows of the wood. Adjusting his eyes slowly brought into view a land never beheld by the wild man. A single, deep breath sensed the change of the dark, moist forest to the clean, icy valley before him. Tingles filled his face and shoulders as the sounds of rushing water pierced his deafened ears. Squinting brought into view a narrow strip of bright blue in the horizon against a gray sky. Pleasant respite only lasted a few moments before Gangui urged his horse forward.

Dozens of chomping hooves descended down a sandy rift held together only by the icy roots of Zi' da. The threshold from the Warrior's Wood into Etzosian lands was a long awaited gift, whom's price the exiled had paid for with blood and pain. Hooves reared up from behind him. One of Gangui's nomadic companions spoke a long kept secret, "Our paths... are no longer together..."

The wildman shot a piercing gaze. The two men exchanged a long cold stare, before agreeing on a compromising departure. Gangui spat in defilement at them breaking contract, but held no contempt for his nomadic companions as it was in their rights to journey wherever they pleased.

Another set of hooves approached, it was the older nomad. An undaunted finger pointed west towards the river, "Behold, The Westride River, beyond lies the lands of the Etzosi," The older man then pointed north slowly guiding Gangui's gaze south, "The river flows from the bosom of Hildareth... down, into the depths of Ne' haer," The wildman nodded silently and repeated to himself the information, taking in the icy landscape to memory. However, the old man was not done. Grunting he jabbed his finger towards the southeast, "There lies the best crossing. It is mortally cold," Gangui nodded, undaunted by the river.

After a long while, Gangui turned his gaze to each nomad thanking them for their sacrifice with a mortal's blessing, "May your natural born right remain uncontested on your journey forward," Without a second thought, he turned towards the Westride and urged his horse forward, departing the group of nomads forever.

The stillness of the vast landscape embodied the wildman as his horse prodded towards the crossing. With nothing to engage his mind, Gangui began to focus on the pain in his legs from riding so long. He had started riding at the age of ten eras, unlike the nomads whom seemed to have been born in the saddle. The desire to dismount was great, but he dared not lest he be required to rest. Conscience of the weakness coming on to him, he pushed his thoughts back onto the crossing, but this did little to relieve him.

The sounds of life giving water flowing over brittle rocks roared about him when he finally approached the obstacle. Scanning the landscape, the wildman could not readily figure out which part was the best to cross. A sense of urgency filled him as a vast fire in his stomach. Experience in the wild told him not to rush forward without analyzing the situation. Swinging off the saddle felt like the shattering of a frozen log. Buckling under his own weakness, a stifled moan escaped his lips as he laid bundled in his fur cloak helpless for some time.
Last edited by Gangui on Mon Jan 23, 2017 12:54 am, edited 3 times in total. word count: 563 The sand in his veins took a while to shake off, but the wild man still had vigor in his heart. The horse drank heavily, slurping down the blue fluid noisily. The flowing waters seemed incredibly mesmerizing, but Gangui soon realized that this was a deceptive facade. A log drifted by at an incredible speed, faster than the gallop of any horse he had known. Grunting at the challenge that lied before him, the man lead the horse downstream, observing intensely the obstacle he needed to overcome.

Gangui had never crossed such a large river, but the single most important fact he knew about the wilderness, was that one must be prepared. Scanning the opposite bank of the river he noticed that many of the banks were steep and insurmountable for his horse. The soft gravely bank under his feet was also another clue to the treacherous nature of the crossing. Slowly the river began to get wider, which worried him that it would make it impossible to cross. The suns in the sky were climbing to their highest point now.

An uneasy feeling came over him, as if a crawling creature jetted across his shoulders. Scanning the entire horizon revealed nothing other the unsettling emptiness of the landscape. Suddenly, an object came into view drifting down the Westride. At first, Gangui could not make out what it was, but it gradually lost momentum and slowed down enough that he could make it out.

"...aukari..." he grunted to himself as he stared at the lifeless corpse pass by. It was face down, riddled with arrows, and the fiery-red hair was ironically strangling the lifeless neck. The half-breed took it as a sign that the river itself had a racist attitude towards the Aukari. Several yards south, where the river began to narrow again, the corpse picked up speed and disappeared forever.

Then it hit him like a lead brick to the skull. He was standing directly in front of the ford that the old nomad had mentioned. The corpse that had floated by proved this point. Logic also dictated that the wider the river, the slower the roll. Excitement burned like fire in his stomach as he mounted up again and proceeded to enter the Westride.
word count: 378

At the edge of the Westride, the traveler removed his clothing to prevent them from getting wet. He knew that if his warm furs got wet in the frigid waters, Zi'da would claim his life within the day. Bundling up his fur boots into his fur cloak, he tied them on the top of his trusty steed. Rolling up his pant legs to his knees was the last precaution he took before mounting up. Zi'da would not give the man a break, as a howling wind began to pass over, causing Gangui to shudder.

Reluctantly he proceeded into the icy waters and his steed immediately began to protest, neighing loudly and tossing it's head about. Clenching his knees to avoid falling, he kicked the horse onward into the depths. Several yards in, the touch of the agonizing flow of the Westride reached the man's naked feet. The wildman ignored the pain, focusing instead at the task at hand, lending all his focus to his horse and the rushing waters beneath them. The entire process was incredibly slow and tantalizingly unpredictable. The horse took his own path, remarkably calm enough for the inexperienced rider to remain seated upon the saddle.

Gangui was shivering and clattering without reservation. The way the water burned the man's tendrils, it might as well have been the stinging amalgam of molten steel. Barely half way through the river, the water reached the knees. It was at this time that he noticed that the flow of the river had been pushing his horse south towards the area where the water's narrowed again. It took him a second or two to compose his thoughts and push the natural feelings of panic out of his conscience. Pulling the reins north, the horse protested as if a six sense told it not to tread in that direction. A grueling minute later they finally reached the other side. Mere yards away from where the current suddenly picked up again.

Climbing up the banks, Gangui immediately dismounted. Breathing heavily and pacing about, he waited as the adrenaline rush of the crossing still dissipated from his veins. Despite the slow drawn out nature of the crossing, he was moments away from being swept away by the Westride and drowning in a watery tomb. The wildman was truly grateful for his horse, whom he hugged and kissed. Grabbing some rags out of his saddle-sack, he dried off his steed and rubbed her down with gloved hands.

After dressing himself again, Gangui mounted up again before taking one last look at the Westride. The long awaited journey finally brought him to the edge of Etzosian lands. A long cold stare at the river made the man engrave the lessons he learned that day; the widest part of a river was the best place to ford and taking a diagonal path was inevitable so it must be accounted for.

Reining his horse back around, he kicked her into a trot and proceeded east towards the City of Stone.
word count: 509 These points are not be spent on magic.

Loot:
Sorry, nothing to loot

Fame: +2
No actual fame entry to compare.
But I figure the nomads will tell of your trek across the river.
Should be good for a couple of points.

Devotion:
Nothing to speak of

Comments:
A nicely presented part of journeying in the wild.
Just a couple things I feel like mentioning, but they took nothing away from the tale.
"He had started riding at the age of ten eras..." I assume that was meant to be "arcs".
"Conscience of the weakness coming on to him..." I bet you meant "Conscious".

Lastly, it's only in Saun that both suns are in the sky.
PM me with any comments or concerns