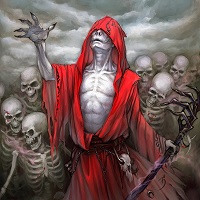 Hey guys, this is where I'll be putting my shenanigans as well as all of my classy, tasteful mental endeavors such as rants, smooth jazz, acoustic blues, and the occasional well thought-out blog post. I guess I will begin with the personality test I took for Neronin. I wanted to flesh out his character a bit. One of my methods is the personality test on 16personalities.com from the point of view of the PC. Okay so the verdict is...

Groovy. Here's what it says about them.

It’s lonely at the top, and being one of the rarest and most strategically capable personality types, INTJs know this all too well. INTJs form just two percent of the population, and women of this personality type are especially rare, forming just 0.8% of the population – it is often a challenge for them to find like-minded individuals who are able to keep up with their relentless intellectualism and chess-like maneuvering. People with the INTJ personality type are imaginative yet decisive, ambitious yet private, amazingly curious, but they do not squander their energy.

With a natural thirst for knowledge that shows itself early in life, INTJs are often given the title of “bookworm” as children. While this may be intended as an insult by their peers, they more than likely identify with it and are even proud of it, greatly enjoying their broad and deep body of knowledge. INTJs enjoy sharing what they know as well, confident in their mastery of their chosen subjects, but owing to their Intuitive (N) and Judging (J) traits, they prefer to design and execute a brilliant plan within their field rather than share opinions on “uninteresting” distractions like gossip.

Rules, limitations and traditions are anathema to the INTJ personality type – everything should be open to questioning and reevaluation, and if they see a way, INTJs will often act unilaterally to enact their technically superior, sometimes insensitive, and almost always unorthodox methods and ideas.
This isn’t to be misunderstood as impulsiveness – INTJs will strive to remain rational no matter how attractive the end goal may be, and every idea, whether generated internally or soaked in from the outside world, must pass the ruthless and ever-present “Is this going to work?” filter. This mechanism is applied at all times, to all things and all people, and this is often where INTJ personality types run into trouble.

INTJs are brilliant and confident in bodies of knowledge they have taken the time to understand, but unfortunately the social contract is unlikely to be one of those subjects. White lies and small talk are hard enough as it is for a type that craves truth and depth, but INTJs may go so far as to see many social conventions as downright stupid. Ironically, it is often best for them to remain where they are comfortable – out of the spotlight – where the natural confidence prevalent in INTJs as they work with the familiar can serve as its own beacon, attracting people, romantically or otherwise, of similar temperament and interests.

INTJs are defined by their tendency to move through life as though it were a giant chess board, pieces constantly shifting with consideration and intelligence, always assessing new tactics, strategies and contingency plans, constantly outmaneuvering their peers in order to maintain control of a situation while maximizing their freedom to move about. This isn’t meant to suggest that INTJs act without conscience, but to many Feeling (F) types, INTJs’ distaste for acting on emotion can make it seem that way, and it explains why many fictional villains (and misunderstood heroes) are modeled on this personality type.
word count: 623
Top

Character Portraits
Okay so I paint on my iPad using Procreate sometimes. I'm not good, exhibit A below. I do like to practice and occasionally come through with something that doesn't make me want to hide my head in a box forever. I really like Niv's art and have seen it on past sites as well. I think her characters are always very original and fun to read. I decided the first portrait I'd try my hand at on ST would be one of Niv... version 1 of Niv.

I usually do dark and brooding characters, which is why this one has a pretty dark look in her eye even though I tried to make it less broody. But it fits because Niv is a total badass so there. Anyway, hit it up with your thoughts. Im not serious in my art but im always serious about improvements. Niv hope you like it!

My own thoughts: The nose is wonky and it needs work. The hair isn't comprised of vines, I'll work on that. 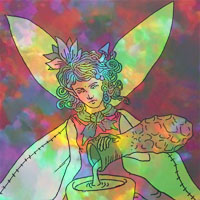 Okay so first of I'm honoured that you felt compelled to draw my character and you did a great job. You put a lot of character and life into the drawing which is half the battle.
Although you asked me for criticism so I guess I'll give it to you.
First with the eyes, to get a less sinister look round out the top of the eye lids a bit upwards to make it seem more wide and happier (only the slightest degree). Then to give a bright happy look to the eyebrows, tilt them slightly away from the brow (again only slightly) and raise them up a touch (not enough to make her surprised just content). Also make the Iris and pupils bigger, the bigger the contents of your eye the more youthful and innocent the character looks, the smaller the more mature and calculating your character looks (too small and they look like a praying mantis demon, too big and they look like a pixie)

Your working on the nose so I won't touch to much on that, but females tend not to have very large noses obviously some do but niv's is more flat.

You also mentioned the hair and yes it should be curly vines and not grass but you need to think of the scale of things, Niv is tiny so the mushroom and flowers could be much larger. The objects in her hair seem to be floating and not actually attached to the hair in anyway. If you're having trouble with the hair just add some cool Accessory that fixes the hair up (Its what I like doing

Be aware of your own features and whether you're imposing them onto the drawing, Niv doesn't typically have a cleft chin but I suspect you do.
word count: 307
Top
Post Reply Request an XP Review Claim Wealth Thread
3 posts • Page 1 of 1