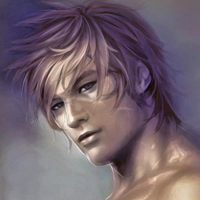 (please do ignore the spikes coming out of its back, and the electricity-kinda aura. I'm too lazy to edit it out

)
Quick Facts: Pitch black, quite large wolves, nocturnal, incredible agility, stealth potential during the night
Height: Ranging from 2' to 4'2" at the shoulder
Width: Ranging from a foot to 20 inches (I suck at this one, please tell me if this measure is awful)
Length: Ranging from 5'5" to 8'5"
Weight: Ranging from 360lbs to 500lbs
Native to: Forests around Etzos
Locations: Throughout the entire Western continent - West Idalos, west part of Central Idalos, and some bits of the west part of North Idalos

Appearance: The kathor appear to be hound, or even wolf-like creatures, only larger in every way. They can grow up to the height of an average human, and the length of a serpent, and their weight is far greater. Their fur is pitch black, no matter if male or female, or where they were born. In the night, they can often be looked at and not noticed, because of their color, which is what makes them such good hunters and gives them their nickname, Shadowhounds. They have retractable claws on their paws, much like cats, but a head in the shape of a wolf's. The kathor have a mane around their necks much like a lion's, which appears to be too stiff for normal hair, just like the hair on their tails.

Habitat: The kathor prefer dense forests, especially darker ones, their natural camouflage making them blend in well. Females often live in packs with a single male in forest clearings or caves, claiming such areas as their own territories, while most other males are loners that don't have their own territories. These lone kathor live a nomadic life, often found resting on strong tree branches during the day, travelling and hunting during the night. Pack territories aren't large, and will often shift depending on the time of arc and the current needs of the pack. Unless challenging the pack leader or wanting to mate, lone kathor don't venture onto pack kathor territory, but are otherwise careless on which predator's grounds they walk.

Lifespan and Development: At birth, a kathor is usually about 2 pounds, never going beyond 3, and those born far smaller are are often abandoned and left for dead by their mother. At birth, males and females are similar in size, except males more often have lighter eyes. The kathor are born blind, with their ears flopping down, just like a wolf. In the first few weeks, the kathor are indistinguishable from black wolf puppies. Only at about three seasons of age does the difference start showing, as the kathor do not howl yet and the kathor mothers more often leave the pups with the pack leader to go hunting, and for longer periods of time. Unlike wolves, the kathor pups are not very dominant, and if approached by humans at this age, they can be impressionable. From 2 to 5 seasons of age is the most common time for the kathor to be tamed by eager adventurers and many different western military forces, as their bloodthirstiness doesn't develop for several arcs.

From that point on, almost every aspect of their growth is the same as a wolf's, up until their first or second arc of life. At this point, the female kathor are regulars on nighttime hunting trips with their pack, while males are shunned away by the pack leader and forced into the wilderness. Roughly 60% of males survive until their third arc of life. These exiled males sometimes move in groups until they are fully developed and able to take care of themselves, but it is equally common for them to live alone. Many foolish attempts at taming and capturing these exiled males had been made throughout the West Idalos' history, usually resulting in humans dying, since at this period in their lives the male kathor are at their most aggressive. They will attack anything on their path, and groups of these males have been known to engage in fights with the Ne'haer Cliff Lurkers. Around the third arc of their life is when the Kathor can be considered sexually mature, however the kathor have been known to grow throughout their entire lives, at a significantly slower rate.

The Kathor have incredbile senses, starting from about this point. Their vision rivals a hawk's, both during the day and night, and they can smell things miles away. Their hearing takes a back seat during these formative arcs, and it doesn't fully develop until their seventh or eighth arc. As well as the senses, the kathor's agility increases significantly at this period, and they become the predators that they're known as. The packs often feast on hooved animals such as deer, elk, and bisons, depending on the region they're living in. In times of hunger, the pack will hunt minor animals such as rabbits, beavers or badgers. The male kathor often choose smaller prey as a result of hunting either alone or in small groups. The male loners will often attack predators in their area since the kathor are usually on the top of the local food chain. Some large kathor have even been known to kill a bear, but this is a rare occurrence considering bears and kathor hunt different prey and often don't often come near each other.

Come mating season, mostly near the end of Cylus and early to mid-Ashan, the females from the packs and male loners often pair. The pack leader, of course, has the advantage of choosing whichever female kathor he prefers, but these wolf-like creatures will only mate with a single partner per season. After the mating season is usually the time when lone kathor challenge pack leaders for their dominance over a pack. Unlike wolves, this fight is rarely to the death, and winning does not guarentee control over the females. The females choose who they will follow and even if the lone kathor loses, some females from the pack may choose to follow him.

Then, after 90 trials of gestation, new Kathor pups are born, usually in groups of two to four. The cycle starts all over again, and keeps repeating itself until a kathor's death. The kathor, however, don't die easy, as they have been known to live for over 30 arcs in the wilderness, approximately 26 in captivity, simply for the lack of daily exercise while captive. The kathor have been known to foresee their own death, and thus leave their pack, or their usual territory, in search for a place to die. Each kathor finds a different place suitable for this, and there is no information on how they determine where they want to rest forever.

Diet: Carnivorous. Mostly mammals, packs usually hunt larger animals such as deer while loners hunt beavers, otters and rabbits, while also preying on smaller predators such as foxes, coyotes and sometimes even smaller wolves and wildcats.

Temperament: During the early stages of their life, they are quite friendly towards humans, and as they mature this friendliness turns into bloodthirstiness, as most kathor are not afraid of sentient beings. During mating season the kathor are very territorial and protective towards all of their species. After the mating season, however, is when things are the most dangerous for humans. Each male kathor will view humans as challengers, tracking them down and attacking. The females are more friendly after the mating season and this is usually the time one wants to try to tame or capture a female kathor. The older a kathor gets, the more respect and wariness they will gain towards humans, and near their 27th and 28th arc of life, they will even allow humans on their hunting territory, unless the specific kathor/pack has been wronged by humans (hunted for food, fur/attempted capture of the kathor). The kathor are often very aggressive towards other animals, excluding large predators such as a Zelroux or a larger wildcat. Towards those ones, these wolf-like creatures act with a sort of respect, sensing the strength. The Horned Carowa and experienced human hunters are two of the only things that actively threatens the kathor, and lone males will often find a tree to climb if they catch wind of a Carowa anywhere near them. With packs, it is somewhat different, as they are be more territorial. Larger kathor packs, of over a dozen members, have been known to take down a Carowa that threatens them, but they often simply try to scare the large birds off. Rarely, the Kathor may elect to abandon their territory rather than fight.

Abilities: The kathor have very strong senses, allowing them to be one of the best nocturnal predators on the western continent of Idalos, however, their vision under bright light suffers because of this, and they struggle during the day, if they had already adopted the nocturnal lifestyle. A wild kathor's day vision varies depending on the individual kathor, but it is often that lone kathor have better day vision than humans and their subspecies, while a kathor that has lived in a pack most of their life's is about the same as a human's. This is for one simple reason, the lone kathor often have need to operate during the day too, so they have more reasons to adjust to the increased amount of light. Their vision, if raised in captivity and forced to accept a daytime cycle, can be just as sharp during the day, but in this case, they lack the night vision the wild kathor have. While their sense of smell is definitely superior to a normal wolf's, the kathor often can't smell over very long distances, but their sense of smell is said to be so precise, they can not only know which species and gender they are smelling, but what that individual member of the species ate earlier that trial, and when. Many different examples are given when talking about a kathor's sense of smell, and while they can't be confirmed scientifically, or at least haven't been confirmed yet, they all talk about its extreme precision. They are also quite agile from arcs of developing and growing in dense forests filled with trees and obstacles. The kathor have the ability to jump incredibly far and high, and get bursts of speed before jumping. They rely heavily on the element of surprise when hunting and if their prey is not caught with one or two swift jumps, they will give up the chase and move on.