Ti'niva has a nightmare about a woman he killed in Treid's tomb. 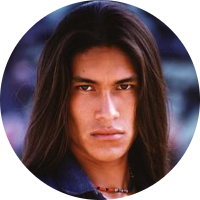 The face of Death He walked through the empty forest, one which reminded him greatly of home. What a longing he had for it, the small clearing in which he had lived the past 2 arcs. Now he wanted to show it too Àine, strangely she was not with him, and he wondered where she could possibly have been. She never disappeared for long, but now it felt like she was many miles away. He kept walking treading through the soft underbrush the grass tickling the underside of his feet, they left barely a trace form his soft step. The sun would have been blistering hot if it weren't for the trees that shielded him. It must have been summer, already he struggled to be believe it. He kept walking briefly taking the time to admire the wild forest flowers that grew in the openings of the thick canopy. It was certainly a beautiful day and a beautiful place. He would not rush himself when he could admire all his surroundings.

But as he walked it suddenly began to grow cold and dark. He was walking faster now, the darkness seemed to be encroaching from behind him. He didn't like the feeling it brought with it and as he peered back to see what was there. His look revealed what the darkness had caused, everything was rotting. The grass had turned brown and crisp, the trees were falling and rotting. The beautiful colours of the forest were turning and the air that came with it was as cold as ice. The earth below his feet became frozen and hard and the wind picked up. He saw a cave ahead of him, one which would protect him from the cold that was taking over the forest. He walked towards the entrance, it was oddly square and it felt like he was being funneled into something.

He stepped inside the dark passage, the walls either side of the thin stairs were frozen, colder than anything he would find in his home forest. The stairway was dark and cold it made his teeth chatter and he felt like he was going to freeze. So, he kept walking, following the stairs and advancing slowly. Something was oddly familiar about the stairway, and he felt dread as he went further and turned every corner. He heard a girl crying, her voice echoing from further up the stairs. He felt himself come to a complete stop. He felt his heart quicken and his mind rush to find a conclusion. The sound of the crying continued and as he started again climbing the stairs it got louder. He took a step and it was followed by a splash, like he was walking through a puddle. He looked down and he saw a red liquid cascading down the steps and around his feet like a waterfall. He swallowed with a loud gulp as he hoped deep down it was not blood, but he was doubtful that it could be anything else.

It was like walking through a warm stream and it made his stomach churn. Everything about the passage was familiar, from the feeling of the steps to the walls. The temperature of the stairway felt like what he had only felt once before and the warm liquid felt out of place. The whimpering made him feel sad, like for some reason it was his fault, like he had caused the sadness this girl was feeling. Each whimper seemed to say something to him. "I had a sister." He kept walking the strange moans and cries mixed with words, telling a story. "We loved each other more than life itself." He felt a slight tear come to his eye. "Now she is alone, back home waiting for me to never return." It hit him like a brick, her emotions were so strong they blinded his own. "I had to fight, I didn't have a choice." He kept walking trying not to cry at her story. "But now I am dead, my sister alone and my honour lost." He took another step he was close.

He continued to climb the bloodied stairs, he was almost at the source of the sound and he felt a lump growing in his throat. He knew that the source of the crying lay around this next corner and he took a deep breath before taking the turn. There she was, the crying girl, sat alone on the stairs her head in he hands and rested on her knees so he could not see much of her. "Are you okay, can, can I help you?" He asked nervously, unsure what to do. He took another step forward, his heart was in his throat. Another step, he reached out his hand towards the girl. She appeared to be wearing armour, strange that she would be in armour. Another step and his hand came into contact with the girl's shoulder.

She was cold, freezing, like ice. He could feel a wave of this cold spread over his own body, it was like his whole body had been submerged in a frozen over lake. His whole body shuddered at the contact, and he struggled to keep his composure with the strange emotions she was projecting onto him. He felt like death was grasping at him and trying to lure him to the world beyond his own. His hand left the connection as he could no longer take the emotions and the physical cold it was causing him. His whole body was rigid, like he was a sculpture and nothing more than a cold stone representation of himself.

"What is the matter, what can I do for you?" He asked wondering hoe he could ease her suffering, unaware of whatever was truly causing it. He felt his heart began slowing. Momentarily as he thought possible he could help her through her hard time. It was a comforting thought, but one that would soon be crushed by the harsh reality of the girl. He tried to look into her eyes, but she shied away and hid herself at first. Yet then suddenly as he spoke one last time she seemed to taken notice of him. "I cannot help you if you do not talk to me." He said trying to draw her out of her protective bubble. But he was meat with a harsh snarl and huff of anger. His eyes opened wide, again, amazed by the sudden emotional switch of the woman.

To his surprise she turned to him, her face furious and her eyes a burning hatred. A dagger was sticking out of her chest and blood was soaking her body. He suddenly recognised her, the face, the clothes, the dagger. He was filled with shock as she grasped onto his shirt her blood covering his clothes and his arms as he tried to get her off. "You did this to me, you killed me, you murderer." She screamed at him as he looked into her pain filled eyes. The look of loss in her eyes made him feel sick. She kept hold of his shirt pulling at him."This is all your fault, you monster, you animal." She screamed more, he tried to break free from her but he couldn't it was like the blood had frozen her to him. He felt himself losing it, the boundaries of his sanity were being pushed.

He grasped at the sides of the stairway as he struggled with the girls grip. She kept hold of him like her grip was made of steel. "You took me from her, she is alone now, who knows what will happen top her now." Her grip tightened and Ti began to struggle harder against her. "All alone in a big city, and It is all you fault! I will kill you for this, you do not deserve to live." She continued to shout at him her anger strong and understandable. They may have been understandable but it did not give him piece of mind. He was not ready to die, not by an animal of the wilds at home and not by a woman he had already killed. He loved his life, he had found his familiar and was just starting to make friends, he was not ready. "Please, I am sorry, I am sorry, I am not ready. Oh Moseke, anyone, please help me!" He pleaded with the girl and then any higher power that may be there.

He wriggled and squirmed trying to get free but to no avail. "Now it is your turn to die." She pulled the dagger from her chest and plunged it into his. He grasped at the dagger, his own blood coating his hands, the colour black, his blood... black. He screamed in agony and fear, his eyes blurred as she threw him from the stairs, he felt himself floating for a moment, everything suddenly calm before he hit the stairs and rolled and banged down. The stairs seemed to go forever, each hit hurting more than the last, his blood coating his chest and soaking through his shirt. He continued to scream as his body left the last step and began falling into nothingness. His body seemed paralyzed as he screamed, he could not move, but he could feel the grass on his limbs and the cold night air dragging his skin, the sweat beading down his forehead. He couldn't stop the screaming as suddenly the tree next to which he slept came into view. And he was again awake.

The face of Death

NOTES
Hiiii. Sorry for the lack of knowledges, dream threads, by their nature as dreams, aren't great for them.

As for the dropped Structure point, there were a few places were punctuation was missing, or words were misspelled, enough that it tripped me up and broke the flow of the story. The three most egregious places this happened were as follows.

"He took another step he was close." This one really needed a comma between "step" and "he".
"There she was, the crying girl, sat alone on the stairs" "Sat" should be "sitting" here.
"He asked wondering hoe he" "Hoe" should be "how".

Aside from the errors, the story was really good, I liked the sense of guilt it showed, for someone who had never killed before and wasn't the kind of person to be able to hold themselves away from it just because it happened in a battle. Really looking forward to reading more about Ti'niva! PM me if you've got any questions.
word count: 195