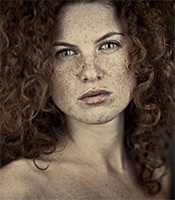 Partners:
Appearance
Her frame is stocky, but practical; the daughter of farmhands, she has callouses all over her hands from leathered use and manual labor. Her eyes are a light grey, which may deepen to a blue in low lights. She has olive toned skin with a generous layer of freckles and voluminous red-brown curls that fall to her shoulders. She's got a scar on her right hand from when she was playing with her brother and got her hand stuck in an ox cart. She's got a birth mark about the size of a quarter over her left ankle. Her jaw is broad, angular, would look masculine were it not for her high cut cheekbones.
Personality
Thalia's got her eyes wide open, better or worse. She was raised on a farm, where she learned black and white moral codes, and often finds herself overwhelmed and flustered by her experiences in the city. She can come across a tad naive, perhaps inexperienced, but she always has her heart in the right place. She's a devoted worker, a fast learner, and cares above all about sick people getting well. Her decisions ultimately come down to what she believes is right, and what is most respectful to the other parties involved.

Thalia comes five minutes early to dinner, and she brings her own side dish to share. Her favorite memories of her family are her mother reading stories to her and her brother on weekend mornings. If she wasn't pursuing her career as a medicine woman, she would be working the dairy farm with her family. Her strengths are her optimism, her kindness, and her exuberance. Her weaknesses are stubbornness, impulsive actions, and naivete.
History
Thalia is an older sister to a brother, and a daughter to a pair of farmhands who live in the countryside outside Rharne. They're dairy farmers, so they produce a bunch of milk and turn it into cheeses and then when the merchants came through, sold the cheese to merchants who would take it into the city.

She and her brother would often get banged up and bruised playing with one another, and their mother would have to stop tending the cattle to patch them up. This is where Thalia first started to get interested in medicine, and by her early teens, she knew how to tend to basic first aid wounds (bruises/scrapes/etc). She helped her mother rear and treat the cattle. She didn't mind the dairy farm bits, but she grew slowly more interested. She began to spend her afternoons working alongside the town healer, learning how to treat fevers and sprains.

But this created strain within her family as her brother's health began failing, and she was still spending time with the town healer, and not helping to run the farm. But Thalia wanted to know how to help her brother. She began trying any herbs or medicines she knew that might help. She got him in a healthy regimen that reduced his pain, but that's as far as she went. She lacks the medical knowledge to cure him, but her mentor in the town Healer saw her talent. The healer came back to her parents one night, and made the case for her to travel into the city and learn from the Thunder Priestesses.

Her parents were scared to death. With one child so sick, her father outright forbade it at first. After the Healer talked with her mother, they both gradually weaned him down and everyone was on the same page. Thalia received what was going to be her dowry on her 21st birthday. They told her to go to the city, and learn more about medicine and health and curing people, and write back with any recipes or materials she learns could help them.

Thalia is closely bonded with her brother, and leaving him behind was one of the hardest things she's ever done. She writes to him daily about the challenges and eccentricities of living in Rharne. Within the last few months, she became a novitiate of the Thunder Priestesses, where she hopes to become a Healer Priestess one day soon.
Housing
Thalia lives in the Lightning Cathedral with other Novitiates. She has a small room to herself with a window overlooking the city. In her room is a small bed, desk and chair, a set of five candles for late night writing, piles of ink and quills, and the room is smattered with touches of her home - a cattleskin rug blankets the floor, and she has a drinking horn made from the horn of a bull she helped feed when she was growing up. In the wardrobe chest, she has her apron for doing medical work, and a silver mirror and brush set given to her by her grandmother.
Knowledge & Skills