• PM To Join • Use me before I gather dust

A settlement east of Rynmere across a stretch of water called 'the eastern trench' broken into three regions: Welles, Oakleigh, and Berwick.
Locked Request an XP Review Claim Wealth Thread
1 post • Page 1 of 1 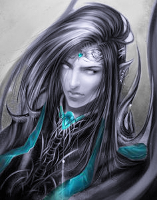 Use me before I gather dust

After last night, Sin had had trouble sleeping. Uleuda had been a short stay that time. When he woke up early the next morning, Sin felt like he hadn't slept enough. His back was hurting from the hard ground and he could only stay down for a few more minutes before he got bored with that as well. Deciding that he couldn't do much good just lying here thinking about things, Sin sat up and started putting his clothes on. The armor he could put on outside once he got his boots on. He remembered Elyna's order to meet him in the morning.

Once he was properly dressed and awake, Sin moved over to the fire. This early in the morning it was nothing more than cinders waiting to be woken up, much like everything else in the camp. While there was an unlucky squire or airman somewhere who had to wake up earlier than the rest to get this fire going, Sin figured that since he was here anyway, he might as well do it. He gathered some of the dry logs that had been gathered upon arrival just for this purpose and put three of them on the fireplace. Using smaller sticks and whatever leaves the gatherers had managed to find and some horse feed, Sin managed to rekindle the fire.

Being one of the only few awake, apart from whoever was cooking breakfast for about a hundred and fifty people, Sin had lots of space and quiet to himself. Not wanting to wander off and trigger any alarms, Sin sought out the one thing he had come to know was so mindless that it allowed him to do all sorts of thinking for himself. Fetching himself the product that was used to treat the equipment of the skyriders as well as several dry cloths, Sin set himself back to work near the stables. Just behind the building he could see the edge of Oakleigh, just as quiet and sleepy as this camp. As he couldn't work on the heavier equipment by the fire, Sin instead worked on it on location, meaning next to the stables.

With the cloths, Sin scrubbed down the dirtiest harness he could find. It was a heavy piece of equipment and even when he took it apart, it still was too much for him. In order to not get lost in all the pieces, Sin had been taught to put the harness together again as soon as he had taken two pieces off and cleaned them. While he had a slowly shrinking, dirty harness on the left, a slowly growing clean harness was being put together on his right. Take the piece off, clean it with a cloth, treat it with the solution and reassemble it on the right. It required little in the way of acumen and thus allowed Sin to use his mind on other things.

First and foremost, Malcolm came to mind. He kept hearing from everyone and everything how great the man was and yet, the more time he spent with him the more Sin realized how right he had been from the start. Most likely, Malcolm didn't think anything of Sin or his abilities, much like everybody else ever, but Sin couldn't say he'd seen any reason for him to change his views of the man either. While he understood that they were at some sort of impasse and that one or the other had to give in something, Sin would die before being the first to do so.

From what he'd learned last night, Elyna's word seemed to hold value with the man and his rank currently depended on his ability to be of use. Once they got back to Andaris, whoever was left then, Malcolm would review his case and judge him. Like the man was somehow better than him. The next piece of equipment came loose with a little more tugging and pulling than was necessary. Faith. He wondered how he'd been so wrong about her. At least her mistake concerning Padraig he could understand. But her blind faith in Malcolm worried him. She'd been so proud when she told him she was free and yet, Sin thought, she was still shackled under her impressions of a fraud.

About a break later, the harness was done, sparkling from the solution Sin had rubbed into every piece of it. It would remain perfect like this for about another break when the next patrol went out. What a waste of his energy. Sin picked up the cloths he'd used as well as whatever was left over of the solution and put them back where he'd found them. The cloths went on the cleaning pile and the solution with the tools on the wagon. Looking up at the sky and towards the horizon, Sin calculated roughly that it was time for his appointment with Elyna.

Without the constant motion of rubbing leather, Sin felt the cold creep in so he put his cloak on before walking towards Elyna's tent. When he got to the front canvas, he was about to reach out with his hand to knock when he realized it was canvas and it wouldn't make any noise. Instead, Sin cleared his throat rather loudly first and then checked to see if Elyna was present by asking her. "Elyna? It's squ-... Rathaan. Are you awake and presentable? You wanted to see me regarding last night's meeting." If he got the ok from inside, Sin would pull the canvas aside before quickly stepping in and closing it again, trying to keep as much of the cold out as possible.
word count: 971
Top
Locked Request an XP Review Claim Wealth Thread
1 post • Page 1 of 1