Son of the Diamond 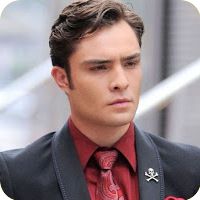 Partners: Ashira Ward - wife
Appearance
Nearly always respectable in appearance, Everett stands just over six feet tall. His hair is kept short, styled in a way that appears as austere as he is. He has high cheekbones and bright eyes, brownish-gold in color. A thin stubble covers his face most of the time, and he prefers to keep it that way.

His style is one borne from wealth. Mostly, he maintains a business suit in public, whether he is actually conducting any business or not. In private, he prefers loose fitting clothes, and often does not wear a shirt in his own household.
Personality
Severe and blunt, many consider Everett to be rude. Though he does always intend to be, he comes across as short and brusque. In truth, he is just direct. He does not care to sugar coat things, nor does he have the time to banter about. He is a man who knows what he wants, and will always find a way to get it. He is ruthless, cunning and determined in all aspects of his life. When he wants something, he gets it, one way or another.
History
The eldest son of Elliot Ward, Everett is a cold and calculating man. He was raised to be as hard in business as the diamonds that brought them their fortune, and he took that to heart. At thirty-three arcs of life, Everett is looking to step out from the shadow of his father and establish himself as a separate and equally powerful man.

From early in his life, Everett found that he enjoyed business. He would beg his father to discuss business with him, and his bedtime stories were filled with merchants who rose from salt to stature. Stars in his eyes, Everett vowed to become a powerful businessman. With the innocence of youth, Everett demanded that his education be tailored to fit that goal, and his father acquiesced him. He was given the finest private tutors in the Settlement, and even some from Andaris. He absorbed the business practices with vigor, and at the age of sixteen, Everett asked to be allowed into his father’s business meetings.

It was evident, though, that Everett excelled at the more subtle arts of business. The darker side, as his father called it. To become prominent, Everett found himself growing shrewd and distant. He did not mind intimidating or manipulating the meetings to benefit himself. He was not above lying or misdirecting to get the sell, and Elliot took note of that.

In the meetings, Everett changed. He took on an air of superiority, a tactic he’d learned from observing his father. He learned to sit in a commanding position, to speak softly to affect his words with sternness, to clench his jaw or smile at the right time in order to manipulate the way the negotiations were going. The more he saw, the more he learned.

After six arcs of internal trade meetings, Everett wanted to be a part of the external trading network. Elliot and Everett worked out a deal, and Everett was given a small house in Andaris from which he would conduct his life in the capital. During his frequent visits home, however, a dark secret began to grow.

Her name was Ashira Thorn. From a prominent family in Oakleigh, Ashira was the dark-haired daughter of a man whom Everett knew well. His sister, Amelia, had been sickly since birth, and the Thorns of Oakleigh were the ones who supplied the medicinal herbs and salves to ease her pain. In their visits, they would bring their daughter, Ashira, and Everett grew fond of her. When he first approached her, she rebuffed him, but he would not take no for an answer. Before long, the two were lovers.

Like many prominent families, rumors could be the death of the Wards’ business. When the townspeople of Glenbervie started spreading rumors about the Thorn girl and Elliot Ward’s son, the diamond magnate rushed to correct the situation. Within an arc, the two were married.

While the marriage wasn't passionless, it was not fueled by love. Everett resented Ashira for the situation, and would often blame her for the small tarnish on his name. His ire would grow more when he drank, and the two would often scream at each other through the night. But for all their problems, the two presented a loving and uniform front in public. Many considered them a powerful match, and the two would do their best to enhance that image.
Housing
Though his family has an estate in Berwick, Everett prefers his 800 square foot home in Andaris that he shares with his wife Ashira. Located within the heart of the city, it allows Everett to position himself in the hustle and bustle of the capital city.
Knowledge & Skills

The table below is an example - replace the skills with the ones you choose. A full list of skills can be found here. Note that in this example, this pc has Endurance as a Fast Track skill so identifies this in the column where they would normally record points out of 251