This is an Out of Character forum for the players of Rynmere, Andris and all satellite villages In the kingdom, looking for further information about the area.
Locked Request an XP Review Claim Wealth Thread
10 posts • Page 1 of 1

Frequency: This starts growing in popularity following the war of Saun 716

Toxicity & Hazards: A drug with known hallucinogenic qualities which grows progressively more dangerous the more it is ingested. Long term use is not wise as it is addictive long term and damaging to the digestive and nervous system.

Appearance: A green dust with a slight sparkle to it.

Properties: Fairysnuff is usually put into the mouth to dissolve. Whilst it does it gives the sensation of 'popping' on the tongue, and it has a pleasant minty taste.

Other Information: Fairysnuff is a recreational drug which is growing in popularity. Upon taking it for the first time, the user is likely to feel relaxed and comfortable, quickly followed by almost universally pleasant hallucinations, often quite fantastical in nature. It also acts as a memory suppressant and has been used in times of emergency by healers when they have run out of analgesics. In and of itself it does not dull pain, but the person under it's influence does not remember, which is better than nothing. An unusual aspect of Fairysnuff is that, as it is taken more regularly, it's side effects change. With more regular use the hallucinations become ever more unpleasant and the user becomes more addicted. This makes it a very dangerous drug to use on a regular recreational basis. Appearance: Star Fire is a rare salt found on blacksand or rocky beaches around Rynmere's coast and parts of the Eastern Settlement (mainly the island of Pyke). Star Fire is only harvested during Cylus when it glows in the dark under extremely cold temperatures. It is common in Endor, Gawyne, and northern parts of Krome, but usually only found in small quantities. Star Fire is harvested by fairies and Tunawa, both creatures who have small enough hands to pick it away from the sand and muck the small, bright blue veins of salt run through. Endor gets the odd meteorshower from time to time, and experts believe this is what helps create the strange salts.

Toxicity & Hazards: As a powder, Star Fire works as a fast acting numbing agent, and as a liquid, it will put a person to sleep within five bits. It is used a lot by the infirmary on patients undergoing operations, and will completely numb a person for up to a break when given the right dose. The powdered form has also been used on individuals under interrogation as it keeps them awake, and numbs them to the pain of removed teeth, fingers, toes, and other limbs and appendages.

Properties: Glows in the dark in cold climates, and floats in salt water. It has a special chemical bond that makes it almost magnetic, but it only sticks to itself and can appear almost oily in liquid. Star Fire desolves in boiling water, and one dose boiled can make enough Fire Water for ten shots. Star Fire in its rawest form is highly flammable, and burns a bright, blinding white when set alight.

Other Information: In its liquid form, Star Fire is called Fire Water, and has a slight, blue tinge. As a salt, the compound appears white unless it is frozen. The salts are usually ground down into a fine dust and snorted, or boiled into a liquid drink and taken in a shot glass. Star Fire will make the user extremely thirsty, and it is recommended that with every shot taken, the user also drink a glass of water to avoid stomach pain or cramps after it has worn off.

Frequency: Common, for a drug!

Appearance: The plant itself is rather innocuous looking, green fern like leaves that have a hint of blue. When dried it turns a rusty brown. New to Ne'haer since Crux's rise to power, Euphoria is a sort of smoked plant that causes spark-like sensations on the tongue of any who smoke it. It produces a rapturous high, with elevated levels of happiness and energy. This leaf is rolled tightly into a piece of robin blue paper, and lit to be smoked like a regular cigarette. When burned swirling pink-and-blue smoke rises from it, with sparkling blinks here and there as the plant burns.

Toxicity & Hazards: Produces a rapturous high, with elevated levels of happiness and energy. Come down is gentle. Great beginners drug.

Properties: Euphoria plant itself is relatively easy to cultivate, appearing across all of Idalos as a mere weed for those not in the know

Other Information: When smoked effects last 3 breaks. Can be used in cooking, effects lasting 6-10 breaks and giving a more ‘bodily’ high.

Cost 50GN for a plant, 25GN for three ready to smoke cigarettes or for a quarter ounce bag loose leaf. 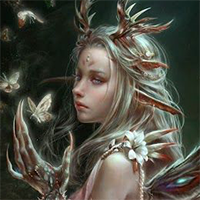 Appearance: Made from the jet black bones of the Särkïn that are ground down into a fine powder and pressed into round pucks. Närkï is highly explosive and used in the Endor mines to clear new tunnels. Närkï loses all of its explosive properties in hot or humid climates and only works in extremely cold temperatures when it comes into sudden contact with heat (usually fire, though hot oil works best).

Other Information: As Särkïn are quite rare and difficult to catch, the powder is equally as rare. This makes it quite expensive. Properties: This rare liquid is collected from the Särkïn itself, fluorescent blue in males and green in females, and is known for its strong healing properties. A vial is considered imperative on a long expedition, as a little goes a long way. Can be applied topically or orally.

Other Information: Due to the rarity of the Särkïn, the price of their blood is very expensive. Appearance: A deep violet liquid made from cold pressing Iffliol plant leaves, Confession is known to provide users a heavy, sluggish type of high, as though overly indulged in alcohol. Not always the most delightful high, the thick fluid is probably more well known for its truth telling properties. Used to great effect by the Inquisitors, Confession forces the users to say whatever comes to mind, revealing secrets that the user may have wanted to hide.

Dosage: One tablespoon serve in liquid form. Can be dried into a powder and pressed into tablet form, but the effects take twice as long to occur.

Properties: Aniseed in taste, must be taken exactly as instructed.

Other Information: Over dosage will cause death by heart failure.

Credit: Darcyanna Venora
word count: 185
"What do you even do with a chimera?"
"What wouldn't you do with a chimera? They're like the Swiss Army knife of animals."
~ Chloe Neill
Top
Locked Request an XP Review Claim Wealth Thread
10 posts • Page 1 of 1

Return to “The Power Behind the Throne”