Sigurd goes hunting, or gets hunted. 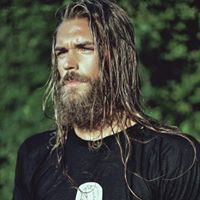 [Willow Woods] What's Become of Me? 7 Vhalar 716
The suns were just coming up as he left his small home, heading directly into the woods with his bow. Sigurd knew he needed to hunt that trial. The venison he'd scored the weeks before was running low, and he could only forage for so long before it was time again. He knew the woods well, probably better than many of the citizens in the city who'd lived there for arcs. The Uthaldrian took to the woods as he took to the Plains, with vigor and cunning.

Sigurd's bow was slung over his shoulder and his quiver clung tight to his hip. Both were positioned for optimal comfort and accessibility should he need them. But the walk was always uneventful, which brought a frown to his hair-covered lips. In the Fields, you were hunted as much as you were the hunter. The monsters in the Fields of Gauthrel were some of the most fearsome on Idalos, and Sigurd had faced them. Here, the woods seemed positively docile, which was both good and bad.

The Lothar sighed as he walked, intentionally quiet. He was going to set up in a tree, but he needed to make sure he didn't alert the wildlife around him to his presence, lest he wished to wait for breaks before they returned. His body, which was layered with thick mud, was bare except for a codpiece. Head to toe, mud caked his form, masking his natural musk and providing camouflage against the bark of the trees.

And so he kept his eyes out for twigs and branches that would snap under foot, and he sidestepped dried leaves on the ground. He had a favorite hunting spot, but it was a decent walk from his home, which was probably a good thing. The deer in the forest were large and plump, and the last thing he needed was for a curious doe to stumble into his vegetation storage. He'd be eaten out of home by his food. The thought brought a smile to his face.

Nearly half a break later, Sigurd arrived at his tree. Powerful arms lifted him into the lower branches, and practiced fingers plucked leaves from them. He pressed the leaves into the mud, layering it for more camouflage as he leaned back against the trunk. He kept his eyes open for any sign of the deer, and relaxed in his spot.

Hunting was just as much about patience as it was skill. You could track and hunt all day, but if you weren't patient, you'd catch nothing. It only took a break, which surprised Sigurd. The buck walked into the clearing in front of him, head bobbing as it nibbled grass. Sigurd smiled and admired the majesty of the animal before him. It had twelve spurs on its antlers, and was sizeable enough for Sigurd to eat plenty for a good long time. He slid the bow from its home and nocked an arrow, aiming at the front end of the deer. A perfect shot would bring it down immediately. A good shot would wound it fatally, and he would track its blood to the corpse.

A good shot it was. The arrow thudded into the buck's chest at an angle, puncturing the lung. The deer bucked and bolted away from Sigurd, who dropped out of the tree and crouched low, walking to the spot of impact. Sure enough, crimson droplets still warm led to where the deer was inevitably going to fall. All he had to do was follow it, and then ensure that no other predators were drawn to the blood as well.
word count: 613
Top

[Willow Woods] What's Become of Me? The scent stopped her dead in her tracks. She raised her head, sniffing the air as another light brush of wind carried with it the familiar aroma, faint but clear. Heady, lingering and growing thicker by the moment, as her nose adjusted to the smell, until she could practically taste the metal on her tongue. Other aromas followed. Venison, definitely a deer. Something else, much fainter, marred in a dirty earth. Hunting instincts were wary, but at the same time, eager for easy prey, for food to fill her aching stomach. Even though she'd barely eaten a few breaks ago, it felt like days. She'd take whatever she could find, no matter what it was.

Some believed that the art of the hunt was in patience, in waiting for the right moment to strike, for the opportunity. They were weak. Taking advantage of prey while it remained unaware of its opponent was a cheap, dirty tactic, similar to stabbing someone in the back, or poisoning them in the middle of a celebratory meal. It took away the dignity, the honour and the damn sport of hunting in general. It took away the fight as hunter and hunted battled viciously for the right to survive in the world, however it might happen, be it succumbing to injuries or starvation. Jajeka had always held these values close to her heart, right from the beginning of her inaugeration as a Becomer, and held fast to them even now as she sprinted through the underbrush, a dazzling flurry of black fur and long, powerful legs. She believed in the art of chasing down prey over the sneaking, the prowling and the quick deaths.

Which was why she made absolutely no attempt to conceal herself as she homed in on her bleeding prey. Branches snapped, her footprints pounded against the dirt and the deer screamed as she jumped onto a broken tree, pounced into the air and sank her teeth and both sets of feline claws into its hindquarters, tasting copper and digging deep as the animal crumbled in her grasp and toppled head-over-hooves into the ground with a meaty thud. A long, low growl left her lips in satisfaction as she felt the deer continue to struggle and writhe, kicking its legs and tossing its head in its final moment, as if it could still survive if it gored the jaguar in its final moments. Several more tears down its body and a tear through its neck sent its final death rattles before stillness. By all rights, Jajuka should have been ready to feast. Something felt off, though. Some remnants of animal instinct, like the hairs on her back were raising. Like she was being watched. She lifted her head and turned with bright yellow eyes narrowed, but nothing seemed out of place.

Or did it? She looked again, head low and slowly twisted her body to stand over her kill, as if protecting the dead animal from whatever other creatures would dare stake a claim on her property. A rumbling warning growl left her throat and echoed through the forest. Something was watching her, she was certain of it. No matter what it was, it couldn't escape, she could see it with her keen eyes and chase it down faster than it could ever fight back. After all, if things turned sour, she could always change to one of the other animal totems hidden inside her body. Bear, boar, wolf... all were at her disposal. She had earned them through the hunt, she had proven her worth in the world and proven she was fit to survive.

There. A brown stain moved and she didn't hesitate to leap out, mouth open and claws extended, weaving in a serpentine fashion to pounce straight upon her adversary and rip out its throat.
word count: 644
Top
Post Reply Request an XP Review Claim Wealth Thread
2 posts • Page 1 of 1