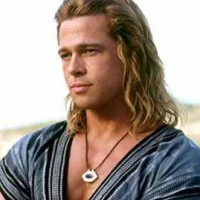 Partners: Crimson Voidflower
Appearance
Keeping his hair long, Kylar will often have his hair on either side of his head to show his blue eyes off. He takes pride in his look, believing that everything has a beauty it should always try and show. He will wear soft, rough shirts casually – or leather when possible. Everything he wears, he tries to show off his strong physique – something else he takes pride in. He stands at 6'5.
Personality
Kylar is a strong willed character, one that took a different path to most of the Lotharro. He admits that harming people, what he does well, is wrong – but if he does it for good, he is willing to do it. He believes that it is better for him to do wrong than to watch innocent people suffer because of his own morals. His passion, however, mostly lies with his partner. Everything he does revolves around her – and that will never change. His personality is normally passive, not showing much in the way of passion. But start drinking, fighting or debating and his passionate side will show. He loves to have fun, and competition is a huge part of that. He appreciates a good drink, and when beaten in a fight he sees it as a learning experience as much as winning is - if not more so. He has strong views on many things, which also leads to more passion. To some, he may come off as aggressive - but far from it. To him, it's just his way of showing interest.
History
When he was young, he chose the path of the hunter. His gut told him that was the path he wanted to take, and he never once doubted that decision. The training was rigorous and tough, and he loved every second of it. The challenge, the adrenaline. Throughout his young days he felt as if he had the best life he could. The thrill was more than just enjoyable, it was addictive. As well as that, the pride and recognition he would one day have. To Kylar, the idea of being well known and honoured was a dream come true. However, as he reached his teenage years, his glory hunting came to a sudden halt. The path he had once adored started to feel wrong. He always knew that hunting was what he could do – and what he would one day thrive in. But he soon realised that his hunting was in the wrong place. What he intended to hunt wasn’t a literal monster like he had once thought, but a man or woman so far gone they had become much worse than something as simple and measly as a literal monster. His prey was clear to him – people. Not people of innocence, his morals wouldn’t allow that. But rather people that deserved it. After all, what was the difference between killing animals and people if both were hostile and both would hurt innocents? He would never pretend that what he did was good, neither would he say his lifestyle and choice of path was something to admire. But if he saved a few lives doing it, then he wouldn’t need honour or admiration.

After this realisation, Kylar knew he must travel. When people asked, he always told them he was the path of the Hunter. In his eyes, he still was. But his path was taking him elsewhere. So he started wandering, looking for a new place to settle. On the way, he met a woman. It was far from love at first sight, in fact he never thought much of her at first. But gradually they spent time, travelling together and the like. Until eventually, one day, he realised that perhaps the strongest passion he had now was no longer his path – but his friend. So he set his eyes on her, and very quickly they fell for one another. Time went by, and they grew closer. After three years, very little has changed between them – their bond is still as close as it has ever been and they are both still comfortable with eachother. They now own a house in Venora, where they live happily together. But Kylar, after settling down, has started his focus on his path again – as well as on his loved one. So his training will begin again, with his goal still in sight – to become as strong as he can and follow the path he chose. More importantly, to save lives – even if it risks his own.
Housing
Their house lies in Venora, Rynmere. Here, they have a small settlement that suits their needs enough – but isn’t anything fancy. They have a bed, a table and other basics. Kylar would like, but doesn’t have, a pet – but he soon hopes to obtain one.
Marks Section

Acting: Trying to act natural is not as easy as it seems.

Gardening: The seasonal nature of plants.

(DJ) Hunting: Sentient beings are the most dangerous game
Hunting: How to hunt without hurting
Hunting: Convincing a doe to come to you

Intimidation: Having already taken one person down, makes you more intimidating.
Intimidation: Being Lotharro helps

Psychology: It's important to make a good first impression.
Psychology: You're never really alone in the world

Tactics: Advantages and disadvantages of a crossbow over a traditional bow
Tactics: Different types of daggers for different jobs.
Tactics: The importance of being prepared
Tactics: Circling Around your Opponent
Tactics: Get low in a fire
Tactics: Shielding yourself from the caving roof

(DJ) Location: Uthaldria
(DJ) Uthaldria: Path of the Hunter
Ithecal: Big.
Crimson: Sees right through you
Crimson: Loves nature
Crimson: Followed you into town
Crimson: Wife
Crimson: A Comfort on the Front Lines
Crimson: It was the right gown
Crimson: No one but her
Crimson: Now your wife
Atashi: An Ithecal
Atashi: Looking for work
Atashi: Enjoys working with you
Atashi: Apologized
Atashi: Has a temper
Atashi: Thinks he got the easy part
Atashi: Thinks you got the worst
Atash: Didn’t know if he’d ever see you again
Atashi: Friend and Comrade
Atashi: Came to your wedding
Lazuli Warrick: A pleasant woman
Lazuli Warrick: Your teacher.
Lazuli Warrick: Kind
Lazuli: Came to your wedding
Location: Skye Verath Lodge
Nir'wei: Works at the lodge
Nir'wei: Came to your wedding
Nir'wei: A bit scruffy-looking
Nir'wei: A pacifist
Nir'wei: A passionate man
Malcolm: Not an optimist when it comes to the weather
Malcolm: Air of authority
Malcolm: A good leader
Aeon: Skyrider
Aeon: Fought the beast
Aeon: Lost his hand to the beast
Aeon: Disobeyed direct orders. Twice
Faith: A slave
Faith: Cares whether you hurt yourself
Faith: Has skill in unarmed combat
Faith: Can teach you not to break your thumb
Faith: Hates fighting
Faith: About to crossbow practice
Faith: Told Padraig about you
Faith: Bolts are intended for ‘the beast’
Faith: Was there when the ‘the beast’ attacked last season
Faith: Knows someone who fought ‘the beast’
Faith: Believes you do things with clear heart and for right reasons
Faith: Trusts Malcolm and Elyna
Faith: Met your wife the previous trial
Faith: Likes Crimson
Faith: Think Malcolm and Elyna are remarkable
Faith: Says Sintih was hurting her
Faith: No Different than Everyone Else
Location: Barracks
Location: Eastern Settlement
Location: Pyke
Location: Welles
Someone else licking your bloody finger, even in a dream, is disgusting...
Symbri: Had a dream about her.
Playing games is fun.
Symbri: Watch out, she bites!
Symbri: in your dream, she was your sister
Symbri: More lonely than she seems, you didn't want to leave her
Symbri: Best (self proclaimed) butt-kicking dancer
Symbri: Immature
Symbri: Loves attention
Symbri: Has Your Back
Padraig: Brought the antidote
Padraig: Brought 3 doses of poison
Padraig: Came on the campaign for Faith
Padraig: Knows someone who fought ‘the beast’
Padraig: Never has fired a crossbow
Padraig: Has altered bolts with hollow tips to deliver poison
Padraig: About to crossbow practice
The Beast: Blood coagulates quickly
Sintih: Put his hands on a woman
Sintih: Squire of Gawyne
Sintih: Untrustworthy
Elyna: Stripped Sintih of his rank
Location: Rynmere: Eastern Settlement
Location: Rynmere: Warrick
Location: Burning Mountains
Karem: The Immortal of the Hunt
Karem: Your guide
Zi'da: Your new companion
Saoire: The Giving Woman
Saoire: Wears a Holiday Crown
Saoire: Delivering Your Gift
Saoire: The Holiday Woman
Saoire: The Beauty of a Gift
Saoire: Wear Variable Holiday Crowns
Tristan Venora: Aristocracy
Tristan Venora: Brave
Tristan Venora: Sculptor
Tristan Venora: Writes Musicals
Tristan Venora: Worships Ilaren and Zanik
Parents: Came to your wedding
George: Officiated your wedding
Skill Point Ledger
Marks Section