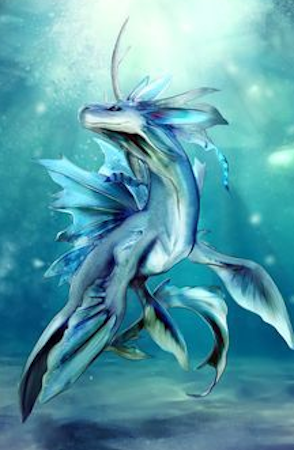 Developed by Pygmalion
Price: Tier 4 (4 wp for those under tier)

Habitat: Aquatic only. Ubiquitous throughout the Seas of Idalos but particularly prevalent in Scalvoris.

Lifespan and Development: The female sea dog lays a hundred eggs every few years in shallow lagoons in places where plentiful wasted food can be found. Often enough, they will breed near to human settlements for this reason. In these lagoons and shallows, the males will compete fiercely for the right to pass on their genetic material, and chase the weaker, slower males out. Once born, it takes around a cycle for a sea dog to grow to a viable measure where they can hunt for themselves, and about an arc before they reach reproductive viability. They can grow to the size of a small pony at their full measure of a few arcs old, but average sizes of a larger dog.

Diet: Carnivorous, largely eating the remains left over after their ‘master’ has partaken of their catch. Bones are a particular favorite of the sea dog. It’s said that one who feeds a sea dog a bone will find a friend for life.

Temperament: Sea dogs have a strong school mentality, and will stick with the same grouping of larger fish and whales (typically other predators with whom they have a symbiotic relationship.) . Given their low nutritional needs compared to fish of comparable size, sea dogs will often hunt for sport, and bring the uneaten prey back to their ‘master’.

A sea dog or grouping of such can be trained to follow a large vessel as they would a whale or any other aquatic creature. So long as they are not harmed by the crew and are fed regularly from the boat, they will follow the vessel loyally, and protect it from all manner of threats, even from other aquatic animals. However, sailors who own sea dogs are well advised not to stay at dock for too long, as sea dogs get restless close to shore, and will abandon the vessel they consider their master if they are not fed a steady diet of bones and granted excessive social contact from its crew.

Abilities: Extremely loyal to those who feed them a steady diet of bones. They have strong group instincts and are surprisingly easy for anyone to train. They are fast in the water, with sharp teeth and razor fins, and are stalwart defenders of their ‘master’, often able to take on larger predators when grouped together or large swarms of hostile fish.

Weaknesses: Often considered pests by net and commercial fishermen, for their propensity for cutting through nets heavy with fish, thus ruining valuable equipment. While not a weakness in and of itself, this leads to many sailors turning on the sea dogs. Often enough culling will occur when fishermen go out to sea, luring in the sea dogs with bones only to trap and kill them. They can be too trusting.

Thick, hairy hide grows on his back, forming discolored patterns in the rough shape of an eye.
Red Swine Eye: A non-seeing, large red pig's eye has grown on Rakvald's left arm.
Talky Hand Puppet : A small mouth grows on the back of Rakvald's thumb, which sometimes mutters his surface thoughts for him.
Bat Boy: Rakvald's face (and that of many of his totems) have taken on the nose the fangs, and the furrowed forehead and brows of a bat-like creature. He also has sunken, darkened skin around his eyes.

Outdoorsy Clothing and hides and furs.

Graft: A pig's snout about one or two inches in diameter, growing between his thumb and index finger.
Hone: The runes he brands flesh with take on a light pink luminescence.
Becoming: A colorful tattoo spread over his chest, of a hog's head with very large tusks.
Top
Post Reply
1 post • Page 1 of 1