WIP; Not ready for feedback

A section where players can submit ideas to be incorporated into the Standing Trials world and storyline. 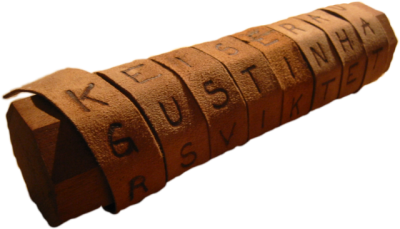 Cryptography is the practice of securing messages or information against an unwanted third party. While historically, cryptography has seen the most use, and gained the most notoriety in the spheres of warfare and criminal activity, but this versatile skill can be used for anything from political intrigue to sending love letters to protecting research notes. The same cryptographic techniques can be applied to all these ends; the content of the text to be encrypted is irrelevant.

Cryptography as a skill separates out into three categories: encryption, cryptanalysis, and steganography, or in plainer terms, code making, code breaking, and code hiding. Despite this common nomenclature though, it is worth noting that much of cryptography deals with ciphers, not codes.

Cipher - An encryption technique that algorithmically substitutes symbols for each other. Usually requires a key to operate.
Key - A number, letter, or word that is used in conjunction with a cipher to encode a message. By convention, written in lowercase italics: 'key'
Plaintext - The readable, unencrypted text that is to be sent. By convention, written in lowercase: 'encryptedtext'
Ciphertext - Text that has been encrypted with a cipher. By convention, written in uppercase: 'RAPELCGRQGRKG'
Alphabet - The full set of symbols to be used in a cipher. Most commonly the 26 letters, but sometimes includes numbers, spaces, or punctuation.
Code - An encryption technique that makes substitutions of words or phrases; for instance, a wartime spy might send a message where 'rainy' = 'attack', 'sunny '= 'retreat', and 'cloudy' = 'wait'
Codebook - A book that lists all the substitutions of a specific code; used to encrypt and decrypt coded messages
Steganography - The practice of concealing a message, whether encoded or not.

Return to “Creating The World”