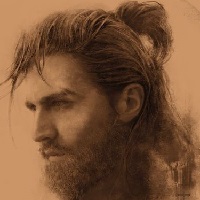 Late that night, when the moon shone its ethereal blues upon Rharne, when the ravens went to roost and the black cats skulked in the night, preying upon the innocent and the guilty alike, there were ghosts. Booming, loud ghosts. Angry ghosts, raging in the streets, and a cacophony of souls making noise. Their festive soiree brought about the odd howl upon the window, their voices clawing, cloying from the Beneath to be heard like the damned, festering creatures they were.

Like a noose with no victim, one ghost in particular sequestered himself to the closet, prying at distant memories that were so foggy, so bitter. Preoccupied as he was, the time got the best of him, and the night he was waiting for began. It wasn’t until the closet door creaked open that he stirred, ragged clothes tossed over his undecidedly dead form. “Puh,” he choked as he focused on conveying himself through the fabrics as they traveled through his translucent incorporeal body to the floor beneath him.

“Huh?” smarmed a very living man to the thoughts in his head. He shut the door, leaving Egaro in the closet to brood by his lonesome.“I really am tired, I’m hearing things.” Creak went the bed, and the cow went off to pasture.

Creak went the bed, and hurried footsteps tap-tap-tapped the floor to the closet. Warm candle-light once again greeted the ghost, though he remained in the shadowy nook cast by the light being off-center with the door. His eyes peered up at the man, who was ruffling through the sweaters and jackets above him looking for answers to his starved, desperate mind. “I could have swore-” just like that, the man shut the door in a huff, and went back to bed.

This time Egaro made no noise. He waited, for he was a sort of hunter, the kind to seek thrills that tied him to life. After nearly a Break listening to the cries coming from the Beneath, he slowly rose to a hunch and peeked a weary peeper through a keyhole into the darkness of night. The candle was snuffed, and that warm body was beckoning. Is he truly already asleep, then? The eyelids closed in to leer. Is he dreaming?

He had to see for himself. Cool palm upon the door, he pressed, focusing on threading his body between the grain of the wood. What he was, his ghastly essence of rotting fog barely capable of perception, seeped, pooled, and dripped through the door, a thicker spigot of him spraying from the keyhole. With so much of him outside, the many connected strands congealed together until he was amassing on the other side, pulling the weighty baggage back to himself.

Rubbing through his hair to soothe himself, he moved to the side of the bed and loomed in the low light, watching his victim. Whomever it was, they didn’t stir. There was ample time to try, though it went against his sense of morality.y Hesitation. Necessity. The war of desire won over those hazy impulses to stay good and keep away from the innocent.

Cold, dead hands moved their way over the bed. That slumbering lump felt warm, a certain type of yearning contending with the ghost who’s greed had overcome his better sense. As his hands touched, the body fidgeted from the cold, and Egaro focused on dispersing his form into the body, Conveying himself into it on instinct. Slowly, he slipped inside as the warmth called to him, but this wasn’t the typical possession he was after, no. He wanted to dream again, and for that he needed someone fast asleep.

Oh world of dreams, I shall soon be whisked away to your comforting hold. As he slipped inside that body, he felt around with his mind for that connection, surprised that this hollow world existed for him to reside within. The dreamscape was distant, but it was definitely there, like a sliver emanating from the soul that had reached out to that other world. All at once, he pressed for it, grasping, diving, bleeding his essence into the dream.

Everything grew dark, but he saw the light in the coming moments as his body emerged in the clear mind, pooling from the earthen dirt of a forest. I don’t recognize this place. For someone who was limited in where they could explore, being able to visit somewhere new was an enthralling prospect. “Am I truly dreaming?” he asked aloud.

“Dreaming? P’shaw,” railed the voice of the lowly traveler next to him. “I’m hiking to the river. There’s this amazing spot where the fish always bite,” he said, rods-a-jiggling from their place affixed to his back. This dreaming man looked upon the dead one through a cloudy filter, but for now Egaro was wholly content to simply observe and enjoy this newfound state of catharsis.

Smirking from ear to ear, the drowned one took step after step on those new paths, right at home in a dream. He grew up in such a world, after all. “It’s good to be back - to the woods, I mean,” he said, catching himself talking to hisself. “Psshh, there’s no way the fish always bite,” Egaro said. “Unless there’s a spirit that likes you.”

The man took his wide-brimmed hat off and held it against his chest. “Well, I respect the fish, I always bring the finest bait. Live bait, cooked bait, and I do chum the water a bit to get their attention I’ll admit.” He chuckled and put it back on, excited for the day to come. “So, the spirits, huh? You believe in those fairytales?”

Egaro snorted, smiling as he strolled alongside the dreaming human. “You could say that.” He wished he could espouse his limitations and show this man a miracle to plant that little worm in his head, but it just wasn’t to be. After all, he was just a ghost. How could he? That seed of darkness ended up in his heart instead, where it festered as they walked. I’m just a ghost. This is all facsimile, a mere taste of what I lost in the waters of Lake Lovalus. Stretching cheeks formed a fond halfmoon in the direction of the river-hunter. “They’re everywhere, you know. If you think about it. Whenever you feel you’re just a bit too lucky, or there’s lights out in the water, or your head doesn’t feel quite right,” said the ghost to the dreamer.

“Poppycock!” laughed the fisherman. “Ain’t no such thing as them, it’s always the Immortals, not some spirit,” said the fisherman again as he slowed to toss his leg over a thick mossy fallen tree fallen dead in the forest path. “Ilaren’s the only one for me.”

A sharp puff of air rippled from Egaro’s nostrils, and he shook his head side to side. A thought came into being, rolling around in the roiling mists of somewhere long dark and dead. As he pulled it down to study it within himself, he found an instinct, a narrow thread in the dream that he could mentally pluck and rub his finger over to cause some effect here in this world.

A glimmer in the woods. Bright, miraculous lights, luminous orbs of white, pink, and gold pulsating their majestic hues burst to life. Their brightness dimmed as they moved beyond the treeline with a breeze at their behest to tip the hat of this non-believer.

As he stood there, his hat spinning off to the mulchy forest floor, a hand fell upon his shoulder. The voice that followed was smooth like tonic. “Do you wish to tell them that, humble fisherman?” the dead shaman asked as they swirled around the pair, taking the shapes of animals. One bounded to the earth and became a living flame, glowing a soft blue.

Busying himself with a dry branch from the forest floor, Egaro tended to the fire with one hand, and the other plucked a berry to feed the nearby dear, a glowing bird landing upon his shoulder. This is who I’ve always wanted to be, he thought. It’s great to dream again, maybe I’m more alive than I give myself credit for.

“What in the world?” said the man who forgot all about his hat, staring at these wondrous miracles. “Are you one of those mage people I keep hearing about?”

A jovial harmony erupted from Egaro’s lungs. “Ha-ha-ha-ha, no, no, these are Anak, my friend,” said Egaro. “Sacrifice to them, align your mind with what they represent, and respect them. Grow their being, and you will have friends in places you do not understand and yet you can still feel them, if you know how to reach out with your heart.” The dream-construed fire Anak crackled, little embers drifting away as the small doe lapped the berry from his hand, allowing him to move his palm over and carefully pet the beast. He turned it away with a gentle push and a whisper from his lips. Egaro stood, the fire beginning to grow by his feet. It was hot, though it didn’t burn. “Do you believe now?” Egaro asked.

“Pah, I must be dreaming,” grunted the old man, and Egaro sighed.

“I'm sure in time you will consider the idea. Life is long, after all. So long. “ He turned, waving the man off. “I hope the spirits are kind to you fisherman, Ilaren only worries about filling your cup and making reverie of the sky. There’s so much more.” With that said, he shut his eyes.

"Who are you?" asked the dreamer, but Egaro offered no response, busy in his meditation. In the blink of an eye, he disappeared from view.

Egaro felt himself present within the body once again. Pressing with his elbows, he peeled himself from the mortal frame of the ignorant soul, remarking on how 'sticky' the body was to his ectoplasm. The mist bubbled and popped as he turned in place and freed himself entirely of it, but the act was tiring. It reminded him of transitioning to the world of the living and the Beneath. "I am Egaro," he said in a faint whisper, and then went back to his closet to rest.
word count: 1755
Top

I don’t believe it’s on the reviewer to award dreamwalking points. You just keep track of which threads occur in Emea on your own.

I thought it was neat how Egaro thought to haunt a dream. I also loved the naivety of the NPCs, thinking that nothing so strange could be caused by spirits, it had to be the immortals. I think this is the most I’ve seen Egaro directly interact with people and seeing how he tried to change the NPCs mind. You have a interesting take on being a ghost… looking forward to see what Egaro does next. Enjoy the rewards.

(Due to the large use of either over two trials, Viden's ice world had finally gotten to you along with what you did to the kids. 5 Trials till the effects where off) [Ends Vhalar 22 719]
Top
Post Reply
2 posts • Page 1 of 1