This is where the majority of dreaming threads will take place. 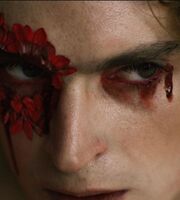 In his dreamscape, Llyr observed himself. All lanky and worn from the hardships of his young life, with scars, mutations, habits, and mannerisms; he dressed the copied clones of himself in different outfits. They didn’t respond to him, merely constructs of his own mind, and totaled twelve in all. He levitated, silently traversing between them while he watched and listened.

A pair of his constructed clones settled to talk with each other, seated on a stone floor. They spoke of things he recognized, about the time he fell from a ship’s mast into the sea while a young boy, and the first time he’d watched the life vanish from the eyes of a man… a woman… a child. Memories that played in whorls of smoke around them while his mind conjured forth recognition of such stories. Through the crimson fog, he spied another pair in a boundless duel with each other. Flashes of colors and explosions of materials launched between them in their pursuit for mutual destruction.

Through a gate of steel and iron, he found one of himself simply lying face down in a patch of grass. The verdant blades swayed, a breeze lifting the pale hair of the lethargic clone, but the construct didn’t move. Not to roll over, not to lay on his back, not to speak when one of the other clones sprinted past. The only motion he made was an occasional sweep of his palm over the grass.

After a while, Llyr tired of his observations. He clapped his hands, rubbed the palms together, and the entire dreamscape shrunk down. His cloned constructs became the same size as his index finger, and he leaned over a diorama version of his dreamscape. His little selves seemed to notice this. They gathered in a circle, murmuring to each other in low whispers and looking up at the sky. One even pointed at him.

Did they see him? Did they know he was there?

Llyr conjured a thin needle-like instrument. He skewered one of the miniature clones through the chest. The clone squirmed, silver blood rushing out of the wound in its struggle. Llyr watched as the other clones moved about and started to conjure other things, trivial acts of governing that paled in comparison to his own.

He was the originator, after all. No matter how his little split selves might try, they would never be capable of ownership of the dreamscape.

With the sharp impalement instrument, Llyr held up the dead clone to look closer at his own face. His own lifeless eyes, tiny as a doll’s, skin ashen pale with silver droplets gathered on his lips. The deadened open eyes interested him. One had gone purely white and the other had gone purely black. Would that happen to him when he died in the waking world? Or was it a symbol of his mind to communicate something to him?

The mage rolled the needle between his fingertips. The limp body of his tiny self ragdolled from the motion. Beneath, the little Llyrs had started… something.

“What are you doing now?” wondered Llyr aloud.

They had clearly taken advantage of his interest in the fallen one of their lot. The remaining eleven Llyrs had set stones and chopped trees in a trio of odd structures. Some of them had found armor, dressed from head to toe in blackened metals. Others wore tight leathers, and one of them wore a rather luxurious noble garb. The one in the noble garb had settled in the highest perch of the structures.

“What is it that you made yourself?” Llyr squinted, then he realized… the clone had made something akin to a walking staff, only larger, and more needle-like… similar to the instrument he had impaled one of them with. At the narrow tip that extended past the top of the little Llyr’s head, a pointed orb fluxed with the tiniest amount of ether. “Why, you created a weapon to help channel ether, didn’t you?”

He leaned back, then bit off the head of the skewered Llyr. While he chewed, he considered the concept. Something to help extend his reach, something to offer him greater aim than the use of his hands or fingers, something that he could manipulate directly without worry about affecting his own body. If he needed a new one, or needed to change something, it would be nothing more than an object. His sparks would need to accept it, so that it would register as an additional limb though.

Careless for the absolute panic it caused in the group of little Llyrs, he flicked the headless corpse back onto the diorama dreamscape below. He snapped his fingers. A simple chair of polished oak wood and plush red velvet appeared just in time for him to sit in. Llyr crossed his legs neatly. He placed the silver-bloodied needle against his lower lip.

The young mage leaned to one side, elbow rested on the arm of the chair, and he tapped his tongue against the needle while he considered the idea some more. The noble clone with the staff had started to perform some sort of ritual around the headless corpse, the other Llyrs gathered in a circle around him. They were chanting in… was it Vahanic? No… he closed one eye as he tried to listen closer. It was a blend of languages. They were all chanting in disparate words. He supposed he had been spending a lot of time on translation work to improve his linguistics.

Llyr lifted the needle up, then threw it across the mostly empty and dark dreamscape that surrounded him. It flipped around, and as he focused, it lengthened and grew. The instrument halted and spun around in place, taller than even the lanky biqaj at his actual height. He left the chair and walked to it. Silver metal, sharp at the end, but smooth enough to grip like a walking staff… and at the top slender point… a structure woven into existence, first a sphere and then triangular points rippled outward from it. The shape continued to spin, though the stave had stopped.

He took hold of it in his hand. Under his palm, black leather shot outward and coiled around to make the metal even softer to grip. It took on a similar design as his daggers. He swung the stave through the air. It reminded him vaguely of a polearm, that he’d seen used in the Etzori army during the march to Rhakros and in the Mark’s Training Ward. If he used it like that… but that was not his intention. Light enough to hold in one hand, but neither polearm nor spear, he almost wanted to focus on ether…

“Perhaps it would be best to…”

Llyr momentarily flickered. The diorama vanished, along with the little Llyrs. He stood in darkness and gradually, his scars faded into his skin, his mutations came to view, and he entered his own emean vessel with his physical form. Once done, he ran his hands over the length of the item. He adjusted it, practiced swinging it and holding it upright, and aiming it.

Once he felt certain that he had the dimensions proper, he left Emea… with the stave. Llyr entered his bedroom. He looked at the item. It seemed just as it had in the dreaming world, though denser to grip. The top and bottom had changed. Rather than a floating geometric shape, the finial had flattened into the shape of a vertical circular ring with a hollow opening and a triangular arrowhead at the very top. The bottom end of the staff had become blunt instead of needle-like.

“Huh,” he muttered while he lifted it up to test the weight in the waking world. “Wonder why it didn’t perfectly cross over…”

He aimed toward the dresser across the way, channeled his ether through his arms, felt it drain out of his palms and into the leather grip. Llyr focused to send it through the metal length, toward the circular ring. A high-pitched sound buzzed. The staff trembled, then shook and he struggled to keep hold. Sharp pains shot through his hands. He dropped the Emean-made item. It clattered to the floor, at his feet. His ether crackled, then retreated into him, unused.

Llyr knelt beside the mage’s stave, then lifted it up gingerly. It felt cool to the touch. He stood, held it upright this time and tried again. Similar happened, though this time, the scars on his palms stung from the backlash. The silver-tinted metal vibrated, and the same high-pitched sound filled the bedroom. He picked it back up.

“Okay, looks like we’ll be trying this a lot then,” he told the stave. “You’re going to let my ether through. Understand?”

The stave didn’t respond, of course. It was just a stick of metal from Emea.

Why would it respond?

Llyr turned toward the bookshelf and aimed the stave at an angled spot just above the shelf. He cricked his neck while he tried to send ether into the metal again so it could be focused through the top and to the spot he aimed for… only to find the backlash stronger and the pain in his palms greater... as he would for each time he tried, for the rest of the night, until he finally set the stave in a corner and sunk into a Becomer's chrysalis to recover from the burns to his hands. He transformed into the totem of a cat, dragged a blanket under the bed, and curled up to sleep in the quiet dark for a few breaks before he would attend to the trial ahead of him.

Re: One Llyr Short

Loot: +1 metal stave from emea. It may not hold the intended properties as anchored items don't always mesh well with Idalos.
Injuries: burns that will heal via chrysalis
Wealth:
Renown:

What a neat take on dreamwalking. Most people go on strange emeyan adventures and few embody just how powerful a dreamwalker is in their own dreamscape. I got excited for Llyr’s idea of anchoring the stave to Idalos and I liked how you stuck to the lore and mentioned how things from Emea don’t always mesh well on the other side. I don’t think items actually help with magic (wands, staves, etc) but I could be mistaken. I look forward to seeing what he ends up doing with that stave… Enjoy the rewards.

(Due to the large use of either over two trials, Viden's ice world had finally gotten to you along with what you did to the kids. 5 Trials till the effects where off) [Ends Vhalar 22 719]
Top
Post Reply Request an XP Review Claim Wealth Thread
2 posts • Page 1 of 1

Return to “Dreamscapes & The Veil”