• PM To Join • Conflict and Strife Date: Arc 719, 68th trial of Ymiden
Time: 14th Break
Location: Etzos
Alex leaned back against the post, her eyes flicking across the crowd gathered and milling around the Bounty Board. As the last time she was here, she was hoping to find someone. She tossed her hair back over her shoulders, and pulled at the collar of her long-sleeved shirt.

It was too damn hot out.

It wasn't even the heart of the hot cycle yet, and she was feeling like she'd melt into a puddle if it got any worse. Her eyes scanned the crowd again, and she caught sight of Trixie and Pug on opposite sides of the open area, both of them firmly keeping her in their gaze. After the events of the last few trials, neither of them were totally comfortable with Alex being on her own. Who knew what would happened next?

After arriving back in Etzos after just over two arcs away, Alex had a lot of catching up to do. Crelian had been left in charge of her shop, the Laughing Potion, something Warren, her shopkeep, hadn't been fond of. But she trusted Crelian the most out of all her underlings, and by a fair margin too. He had run the shop well, extended contacts throughout the city, though had refrained from making any sweeping changes without her. Business had been steady, but without Alex's expertise, things had quickly slowed. It definitely wasn't helped when the supply of Zip Stick that Jachiel had been growing suddenly stopped arriving at the end of the cold cycle. Zip Stick was easy enough to make that Warren could handle it, and much of their clientele revolved around that drug, but business was hurting now.

Which brought her here. A trip back out to visit the farm might remind Jachiel of why he'd better pay up, and a bit of extra muscle around never hurt, especially if things got ugly with the farmer.

Her eyes landed on a woman walking by with dark black hair, and armour covering her body.

That could work, Alex thought, and chased after her, setting a hand on the woman's shoulder.

"Hey, hold up. Are you interested in earning a bit of extra coin?" 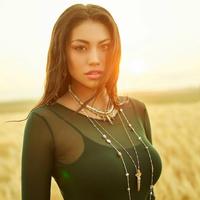 Re: Conflict and Strife

⌘ The sound of her armored heels clicking against the cobble stone ground beneath her melded in with the bustling of the open streets of Etzos. She had been on her way to look for some more work. It wasn't easy for her, given the glares and stares as the whisps of shadow crackled and writhed from off her exposed skin.

She didnt care however, most Etzosian's had more pressing things to worry about than a near with shadows coming off her skin. In her own world, she didnt notice the woman catching up to her until her shoulder was grabbed. Instinctively she grabbed at the hand and twisted her body to turn and face the person. A fist stopped midway aimed for the woman's chest.


"For your own safety don't ever approach me from behind......understood?"
she hissed, her eyes glaring hard at the woman. Letting the girl go she took a step back and fixed her hair, putting it up into a ponytail.
"Sorry about that, now what do you want?"
her tone was direct, but more suspicion than aggression.

Arms folded under her breasts and looked the woman as she spoke, and the offer of coin intrigued the naerikk. She smirked, a devious curl in her lips as the prospect of money excited her.
"And what would I have to do for this coin?"
she purred, a gust of wind blowing past sweeping her ponytail up and around.

Whatever it was this woman wanted, Yavanna would have no qualms doing the job, how else will she fund her criminal empire. ⌘

Re: Conflict and Strife

Alex felt her hand squeezed by the other woman, and was hardly prepared for nearly being punched in the chest. She wrenched her hand free and took two steps back, clearing some space between them. The woman had some sort of odd shadow on her back that Alex hadn't noticed before. As she glanced down at it, she realized it was an intricate tattoo. It clicked in her mind, and she realized the woman was a Naer.

"Fair enough, though I suspect you'll have a hard time keeping your back away from everyone here," Alex said, nodding her head towards the thick throng of people that lay ahead of the pair. It was the largest gathering Alex had seen since the plague had decimated the city. She noted that many of those present were missing limbs, and even more had a haunted look in their eyes.

"In any case, I own a shop in the underground, and one of my suppliers has decided to stop shipping while I was busy these last two years. The man I left in charge had enough on his plate and couldn't deal with it, but it's high time I handle the situation. I have an enforcer who's waiting outside of town for me, and she could use a bit of extra muscle. I could pay you 50 gn with a bonus of 100 gn provided my supply starts moving again."

As if just thinking of it, Alex smacked her hand on her forehead. "Shit, I can't come with you, but it has to be handled today. I've got to meet one of my investors this afternoon. Val, the enforcer I was talking about, will be waiting along the main road from the Great Gate about a kilometer out. Just follow her lead."

After this she reached into her pouch and pulled out a purse filled with the promised coin, holding it out to the Naer.


OOC: the farmer only knows Val, one of Vluh's forms, so Alex cant go meet the farmer in this skin.
word count: 359