• Completed • You're my Illusionist

Someone I can't resist 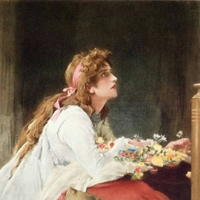 After an intense day of studying and training – an unfortunate day where many mishaps ensued – Anastasia sought after a way to unwind and unburden the day’s stress. The Devil’s Advocate was one such place that offered the service that Anastasia dearly wanted. Anastasia wasn’t a frequenter of the ale soaked establishment, for she believed that any downtime she possessed was better spent on other more productive activities that – in their own way – relieved her daily stress as well as enrich her experiences. However, the magnitude of the day’s stress was far too large for these activities to disperse; drinking the woes away was quick and relatively easy. As Anastasia made her way from the workshop to the pub, Anastasia admired the urban scenery of the large city. She looked at the various stone buildings that were erected many years ago. With some focus, her eyes uncovered the small traces of mana lingering in the air, she also marvelled as she saw minute streams of mana flowing through the well of her conduit; the golden eye pendant. Holding the pendant in her hands brought warmth to her, for it was made by the hands that who she holds in the highest of respects.

Once she arrived at her destination, she pushed open the door, she was then met with the faint stale scent of alcohol; a smell she found neither pleasant nor foul. She spotted a few patrons that she assumed were regulars of the slowly decaying establishment. Wanting a drink for herself, Anastasia made her way to the bar counter, where the owner of the pub stood behind cleaning a mug with a rag. Upon arrival, she was met with his attention.
“What can I get you?” asked Linus Gaut, the owner of the bar.
“Just a mug of ale, please.” Anastasia requested, sliding the price of the drink along the countertop to Linus.
Linus quickly eyed the amount that was given to him, mentally counting out the assortment of nels, and with a quick nod he smile at the young Neophyte.
“A mug? No worries, give me a moment.” Linus said as he swept the nels from the counter and turned to pour a mug of ale.
As she waited to receive her beverage she scanned her surroundings once again, looking at the minute details around her. The place looked quite old –or rather poorly maintained – and the smell of alcohol was very strong from where she sat. Soon, a clunk was made behind her; her drink awaited. Pulling the mug to her lips, Anastasia touched her lips upon the rim and slowly poured the alcoholic beverage to flow past them into her mouth; it was bitter. Anastasia was not accustomed to the taste of the bitter yellowish liquid. She couldn’t stop herself from wincing as the horrid taste that lingered after downing the substance. But, after a few more sips of the ale, she grew an acquired taste – although temporary – for the beverage.

It was not long before her pleasant time basking in the warm glow of her drink was interrupted. A drunkard, a man who was much taller and larger, made his way to the stool beside her. He was filled with determination which was fuelled by a delusional belief of his charms. The man’s odour leaves much to be desire; for the smell tickled the nose in the wrong way – smell of sweat, ale and the noon’s lunch. From the way the man eagerly spoke and advanced toward her, Anastasia knew that kind words would not sway the man to leave her alone. It was evening, and the establishment was growing livelier; Anastasia didn’t want to cause a scene where many onlookers may view. In a moment of inspiration, she thought of a way to solve her predicament. With the power of Arcana, specifically the branch of illusionism, she could weave lie to hopefully sway the man away from herself. With her plan in mind, she acted coy and slowly grasped her pendant as she acted interested to humour the man. From the drunkard’s poorly honeyed words, Anastasia confirm her assumptions that he sought after a woman to keep him company for the night – the mere thought of herself playing that role made her feel ill.

The drunkard continued his slurred seduction, and Anastasia continued her shy charade; her hand holding the golden pendant, channelling the mana from her surroundings. As she drew the mana into her pendant, she did her best to weave a lie to imprint into the man’s mind. However, a large issue challenged the young illusionist, for the desire of the man was a force that far surpasses her current abilities; this did not deter her attempts though. She could not directly affect the desire, but, perhaps she could affect the foundations from where the desire derived. The drunkard obviously had no company, so, if she were to ‘convince’ him that being alone was great, he’d leave her alone upon suggestion. Anastasia gazed into the man’s eyes, imprinting and weaving a lie into the man’s mind. After a moment, the man’s expression changed. His face, once filled with determination, was now filled with relaxation, as if his worries disappeared. Anastasia wasn’t sure what had happened.
“So…” The drunkard spoke.
“Yes…?” Anastasia sheepishly replied.
“I think I’ll retire for the night… feeling a little tired…” The drunkard said.
Soon after, the man left the establishment. Anastasia was amazed that her was able to succeed so easily. She ponders from a moment whether his desires were truly impure. Mere moments later, Linus snuck up behind Anastasia.
“Ah! Good for you lass!” Linus commended
“For what?” Anastasia asked confused.
“For trying to cheer up Michael!” He replied. Anastasia remained silent, a sign for Lunis to continue explaining.
“You see. The poor fella, well, I’ll put it bluntly for you. He lost his wife and son a few moons ago. He’s doing his best to mend himself, but a man like that, especially in that condition is dangerous. Not to others, but himself.”
“Linus!” a waitress called, “We need more ale here.”
“Coming love!” Linus pat Anastasia on the back and left her by herself with her drink.
When closing time came, and after Anastasia finished her final beer – a total of four – she headed out to her apartment. Along the way she came across bridge that over looked a flowing stream below. Because of her drunken state, she was just able to notice a pair of shoes sitting by the side of the stone bridge. Anastasia peered over the edge, and was met with a sad sight; a depressing sight that would forgotten until day, when word of it spread throughout the community.
word count: 1148
Top

One piece of formatting feedback would be for you to break up your paragraphs a little in future. On the screen sometimes walls of text is daunting to a reader and it's easy to find yourself skipping lines or reading the same like over and over!

And a style feedback: you also switch tenses, between present and past, in the thread. Easily done, I'm notorious for doing it myself, but if a reader is expecting one thing and reads another, it is an easy way for a reader to be pulled out of the world you are trying to create.

And then content: I was a little confused about what was going on. It would be nice in future for you to explain the arcana use more clearly. You to a wonderful job of making it mystical so please don't lose that. What I mean is more.. explaining what types of things Anastasia was trying to plant into this man's mind. Did he die at the end? Also please bear in mind Viden's laws on intoxication!
word count: 253