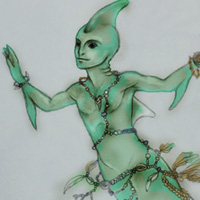 Fame: -30 (SF)
Appearance
Lapis has many features akin to a dolphin, with rounded fins, big cheerful eyes and a wide toothy grin. Due to a childhood illness that plagued him growing up, Lapis is bit on the short and slender side. While most Mer have a tail length longer than 7 feet, Lapis’s tail is only about 6’9 in length. His smooth rubbery skin has a greyish green tinge to it.

When it comes to clothing, Lapis weaves peals, shells and fabric scraps into eclectic ensembles. He tries to only use light materials so they don’t infringe on his swimming.
Personality
Lapis is far more carefree and upbeat that most Mer. He has a love of jokes, games, knowledge and music, and does his best to inspire that in others.

Lapis has a tendency to be impatient, and a little impulsive, especially if there’s treasure involved. Indecisiveness is his biggest pet peeve and he’ll force others to make decisions with reckless actions if they aren’t making them fast enough. His other flaw is the feeling that he isn't good enough and needs to constantly prove himself. Lapis was never the most capable Mer in his pod and has a feeling

Other Mer are considered family to him, but lapis doesn’t trust the gods or the filthy land spawn. He will still save a drowning soul but they might find their pockets are a little lighter when they wake up on shore.
History
Lapis didn’t have a very eventful childhood. Having been weakened since birth by a crippling ailment, he didn’t have the energy to do very much. While he was lucky his Pod didn't simply cast him aside, Lapis still lived with the reality that he could die at any moment. Without the strength to explore, he poured his time into simple crafts and creative pursuits to make himself less of a burden. Lapis was quickly known in his pod for making sculptures and jewelry out of anything people were willing to bring him. Stories and knowledge of the world were also treasures he collected. His thirst of information led him to the enigma that is magic, hardly anyone he talked to knew about it, which only made him more curious.

After living through 13 agonizing Arcs of sickness, Lapis made a miraculous and mysterious recovery. With new found health he was ready to support his Pod in the hunt but his weakness started to become more of a hindrance than a help. They slowly began to ostracize him until he finally set out on his own. With new found freedom Lapis went out searching for answers to his questions, and maybe a bit of adventure along the way. He had done a great deal of investigation but found little leads until he wandered into a sunken ship to loot corpses. It was occupied by a sea witch named Divine, who promptly chased him away with her superior spear fighting skills. Lapis was persistent however and after a few attempts at stealing her plunder, The witch was forced to use her magic as a last ditch attempt at frightening him away. The poor sea witch was shocked to find that instead of inspiring fear, she instead inspired joy and curiosity in her target. To get Lapis to finally leave her home alone she agreed to teach him a bit of magic. After a few years of training with her, he gained some valuable strength in "Becoming" Magic, But his goal wasn’t finished. He wanted to use this new found strength to find magical treasures and enhance his growing power.
Housing
Lapis has a few small caves he keeps his plunder in, but he shares a larger more accommodating cave with a few other Mer. He has a pet rock covered in a diverse array of Coral he calls Sapphire.
Knowledge & Skills