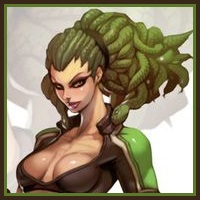 Marks: None
Factions Joined: Imperial Legion
Languages Spoken: Fluent Common
Partners:
Appearance
[img]http://standingtrials.com/gallery/image ... ge_id=1799[/img]
There is some disconnect between 'Shas human and snake components. From the waist down she is impressively large, muscled and thickly scaled. Most of her scaling is a typical green colour, while her underbelly and rattle are a creamy yellow.

From the waist up, she looks as though she should have been built for speed, or a brothel. Muscled yes, but lean, angular. Her slitted eyes are a bright yellow, that when they catch the light just so seem to dance with internal malice. The thick green serpents that make up her hair are often bound back out of the way, though even this does not cease their writhing. When she smiles wickedly pointed fangs are apparent. Despite all this, from the front she is more human looking than many of her kind, but her back and shoulders are still covered in the same tough green scales her bottom half is.

Disconnect aside, 'Sha works. She is not ungainly, instead giving off a sense of athleticism. Not surprising given how driven and competitive the Raskithecal as a race are. When she moves she moves quickly, but she can also set into a tireless slither than while no match for a horse, is faster than a man walking and can be kept up for a goodly length of time. Though her torso is on the shorter side, from tailtip to top of head, 'Sha is a good fifteen feet long.

She tends to favour natural colours, what those colours are varies depending on her surroundings. When she can, she likes leather for the durability and protection. Despite often complaining about the weight or heat, 'Sha loves wearing armour. Should someone ever make her a suit of plate covered in spikes, dripping blood and preferably decorated with the body parts of her enemies, it would be nearly impossible to get her out of it, solely for reasons of ego. 'Sha knows many races find the Raskithecal intimidating, and she loves it.

It would be extremely unusual to see her without a weapon of some sort.
Personality
"You cannot protect what you do not rule, you cannot defend what does not bow to you, you cannot guard what you do not own. We will rule all that roams Idalos, and under our banner they will be safe. Those who will not willingly bow will be made too, and those who refuse to the utter end will be slain. We will rule all and protect all, and what we do not rule will be destroyed."

Understand this and you will understand 'Sha. This is what she as brought up on. More than food, more even than worshipping the Eternal Empress, this.

'Sha is brash and arrogant, and territorial to the extreme. When a thing is hers she will brook no threat to it, nor usurpation of her right to rule it.

That said, she is aware that she is young yet, and that she does not have the might to enforce her rule or guardianship over very much of anything. Yet. And therein lies almost her sole driving motivator. Experience more, train harder, get stronger. All to one day be a more effective conqueror.

She might listen to another Raskithecal, other races will find her to rival even an Avriel in her disdain for them, their opinions and their ways, unless they are proven followers of Raskalarn who have earned their place through demonstrable acts of loyalty and might to the Empire.
History
There was never really any question regarding what 'Sha would do with her life. It was simply assumed and accepted that she would join the Imperial Legions, and she did not disappoint. This was put off for awhile, much to her annoyance, for reasons of lineage. Though not from a particularly well known or accomplished family, they nevertheless took pride in having served in the Legion since it's creation, all the way back to the time of entrapment.

With Sha's mother falling in combat having had only one child, it was decided that 'Sha would not be seeing active duty until the family line was continued. She could continue to train at home, but would not be allowed true service. So she did her duty, laid her egg and left. She doesn't bear any particular ill will towards the likely now-hatched child, she is simply not particularly maternal, more interested in pursuing her military career, and trusts in her father and extended family to raise the child in Korlasir.

Seeing more opportunity and need on the border, where things are less stable and firm guidance is necessary to bring further territory under the protection of the Empress, when new recruits were given the option to begin their tour at the Empires Nashaki Border Fortress, she volunteered immediately.
Housing
Due to her current posting at the Imperial Border Fort, 'Sha is living out of a Legion issued tent. It is sturdy, and large enough for her and her gear, though given all her armour it's a tight fit. Luckily 'Sha when resting is most comfortable curled into places that would make a humans spine twinge. It is undecorated and set up so that it can be broken down and packed with speed as soon as the order to march is given.
Knowledge & Skills