A brief glimpse into the two sides of Ki'an's mixed heritage 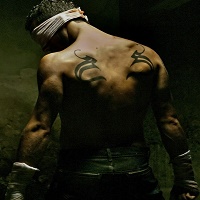 36th Trial of Zi'da 704th
The Fifth Finger,
The Occult Training Rooms
He could see it coming in the corner of his eye. Time seemed to slow. He could see it racing towards him. His steady heartbeat and laboured breaths echoed in the unearthly silence. He knew it was near, yet as his muscles bunched, his forearm arcing to intercept, time suddenly jumped forward.

A blinding thunk crashed into his temple. A dull achy pain spliced down his jaw, through his skull. The knock sent the young warrior off balance, followed by rushed stumbling to regain his footing. Instinct finally reacted to his whim, bringing up both fists to protect his face as another powerful punch came racing towards him, his opponent unrelenting.

The bones within his wrists reverberated upon contact, but Ki’an clenched his jaw tight, shoving the pain to the furthest reaches of his mind, instead focusing on his opponents movements. A quick glance down to the practice mat, Ki’an caught a glimpse of a foot stepping, followed swiftly by another forceful punch, this time thrusting into the young half-blood’s gut.

Instantly the wind was torn from his lungs, his gag reflex choked on the upheaval of having the air crushed from his stomach. Again pushing the agony of the beating to the back of his mind, forcing his gaze to focus. Stumbling backwards he saw it again – a foot stepping towards him.

Survival instincts kicked in. Ki’an roared and put every inch of strength he had into thrusting his clenched fist upwards, almost blindly, at his enemy. His sudden change in tact from defence to offense caught his challenger off guard. Ki’an’s fist impacted with a jolt as it smashed the underside of his foe’s jaw. His knuckles cracked, stung. He could feel his opponent’s teeth chattering through the vibrations down his arm. It was chilling.

Ki’an’s foe’s head whiplashed as he fell backwards. Growling, Ki’an watched his enemy nurse his jaw. He took a moment to catch his breath, panting heavily as the swift wave of nausea rippled through his throat from the punch to his gut.

His head swam, his focus wavered. His whole body was drenched in sweat, it ached, it was bruised. His opponent was considerably bigger than he, but that didn’t deter the young half-blood. His mentors could throw anyone they wanted at him. He would fight until his last breath. That was what they were taught to do after all.

As his opponent recovered from the surprising blow, Ki’an readied himself. The momentary break was over. Like an enraged bull, his foe charged! Teeth barred, hands open. His hands were open? A quick appraisal, Ki’an surmised that his enemy intended to catch him, not beat him.

Standing his ground, Ki’an prepared himself. Waiting until the last possible trill the young half-blood ducked and twisted out of reach of his foe’s outstretched fingers. Barely escaping, Ki’an could feel his opponent’s fingertips brush the collar of his black shirt.

Spinning up to the side of his challenger, Ki’an swiftly launched a leg at the Aukari’s exposed waist. Too slow, his enemy caught a firm hold of the young half-blood’s ankle and before he knew what had happened, Ki’an found himself spinning through air.
Last edited by Ki'an on Mon May 02, 2016 9:56 pm, edited 2 times in total. word count: 584
Top

His rival swung him off balance, shoving a heavy punch into Ki’an’s gut once again before he let go of his ankle. The force of the swing with the blow to his stomach, sent the young half-blood crashing into the practice mat and tumbling in an uncontrolled roll.

The force of impact disorientated the young Ki’an, his mind a whirl as he tumbled. For a Bit he couldn’t tell which way was up, until he finally came to a stop. His arms clenched around his agonising middle, his knees coming up defensively, Ki’an rolled onto his side in the foetal position, moaning softly. His body was beaten, his muscles burned, ached. He found himself gagging on nothing, struggling to inhale, his diaphragm bruised.

A shadow suddenly clouded his view. Blinking through the sweat dripping into his eyes, Ki’an saw the outline of his mentor, a disapproving scowl upon his features as he roared, “Get up!” Ki’an swallowed down the nausea rippling through his body and mentally shook his head to focus. He screamed at his body to move, to obey his teacher, yet his muscles exploded in a fiery storm of pain in protest.

With a curled snarl, his mentor folded his arms across his burly chest, “You’re a disgrace to the Aukari blood flowing through your veins, boy.” Turning to Ki’an’s foe, the teacher gave one firm nod before stepping out of the way. As Ki’an’s hazel gaze woefully tracked his opponent stalking towards him, he knew he had to do something to prove he wasn’t the disgrace the people of Sirothelle thought he was. He had to get up, he just had to.

Through gritted teeth the young half-blood groaned as he rolled onto his hands and knees, pushing his body to obey, fighting away the aching pains of his muscles. With one arm still wrapped protectively around his middle, Ki’an slumped one foot forward. As he made to push himself to his feet, Ki’an looked up, just in time to see the rounded kneecap of his opponent launch towards him.