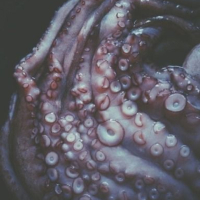 [ Blind in Dark Water ] is a type one mer, a mass of powerful tentacles attached to a humanoid torso. Her coloration is a dark, ruddy red everywhere but for the unprotected belly and face of the creature, which is made of smooth, cream toned flesh. The mer's body is littered with many small scars, and the occasional large, jagged reminder of an old battle, but isn't typically missing any limbs; although, like an octopus, it's completely possible she's torn off tentacles before and used them as a distraction only to later regrow the limb.

Defining features are scarce. She looks like a lot of her closest kin, and tends to garb herself in kelp necklaces of bones and shells scavenged from the sea floor. She doesn't dress like men do. Humorously, she likes to imitate a lot of the behaviour that natural octopodes do, including the behaviour of picking up debris from the sea floor and carrying it along, like makeshift armour or camouflage. [ Blind in Dark Water ] prefers the use of desiccated ship hulls for that, or a drowned out sail. Her nest is comparatively clean, although the debris she collects is amassed in front of the grotto entrance, a sure sign that something inhabits the darkness.

Knowing that Chrien loathes her many malformed children, [ Blind in Dark Water ] hates the Immortal just as strongly, and gives every other Immortal no thought. They may as well as not exist, for they do not swim in the dark currents off the coast of Scalvoris with the Akktava. This mer gives her loyalty to Sotong exclusively (and often in a desperately self-serving way), and will do anything requested of the massive leviathan's colony of mer. [ Blind in Dark Water ] despises the land-dwelling races and their sea-faring crafts, and preys strongly on the weak that tread the water, snagging limbs and pulling downward. She would say she was fearless if she possessed the ability to talk, but she's fairly loose on releasing ink when threatened by a savvy wave rider, proving herself quite opportunistic

The first act [ Blind in Dark Water ] ever committed was the cannibalism of weaker siblings freshly hatched. Given the scarcity of food in those early days of her life, this act is an expected and often welcomed aspect of the mer life cycle, and she thrived due to the sacrifice of these failed broodmates. The earliest years were then instinctive, mindlessly directed towards survival at the whim of the tribe's adults until she grew and learned and began to express curiosity in the dimly lit grottoes of the deep ocean. She'd shown a grim cunning and eerie creativity, and when time came for the next swarm and the newest generation of mer to be hatched, [ Blind in Dark Water ] expressed the concept that would become her. She lived a fairly simple life otherwise for those early years, following the most likeable adult and assisting with the tasks Sotong set out for him, although she participated at a simpler level due to her youth and the lesser strength to be found in the multitude of ingenious arms.

[ Blind in Dark Water ] grew into an individualistic, cunning young adult as the arcs came on. She met and interacted with a few Biqaj, learning a bit of their culture and their customs before sinking back into the waves, and it altogether marked the first of her positive interactions with land dwellers. These Biqaj, on a small trading vessel that moved into Scalvoris waters once every two cycles, became companions of a sort when they dropped anchor and settled in the area. They didn't dwell for long, which was unfortunate, but frequent visits provided the mer with an inkling as to what the human world was doing. She benefited from these engagements very well, gaining a few small treasures for her assistance in untangling nets and warding away predators, and taking the information these Biqaj were open with once she'd gained their trust. This relationship fostered itself for five arcs, beginning when she was in her thirteenth and coming to its end in her eighteenth when Sotong, in its magnitude, requested the mer bring the ship down to add to its collection. It ended, as all things do when they must, and [ Blind in Dark Water ] entered the swarm that summer at the height of Saun. She's entered the swarm twice in her lifetime, and the third looms on the horizon at her thirtieth arc.

At this point in her life, in the twenty-eighth arc, [ Blind in Dark Water ] remains among the Akktava doing the bidding of Sotong and surviving in the ways she sees fit, which does include the occasional sojourn to the water's surface where she can get a good look at the vessels moving across it.

*a traditional mer name based on the terror of being so far down under the ocean that the sun's light no longer reaches you. it's the sensation of nothingness. a common word counterpart is unlikely, but the description can be made.
Last edited by Blind in Dark Water on Wed Oct 10, 2018 11:31 am, edited 3 times in total. word count: 923
Top

Malis lives off the western coast of Rynmere, in a dark cave under an outcropping of rock and shattered ship debris. It's usually well-disguised under kelp and sand, but the inside is clearly inhabited as it's where Malis keeps her worldly possessions.

She doesn't currently have employment, and she makes 0 gn a day through it.
I N T E L L E C T