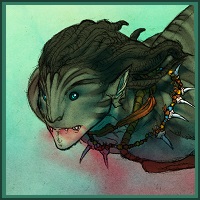 Hello! It's me, the Mer you weren't actually ready for! So I've run into a few questions and mysteries.

Despite this, they possess a deep font of love and affection for two things: The clan and their deities. Their religion and existence is completely consumed in adoration for their leviathans and leaders, the Mer showing a loyalty to those who save and preserve them that to others, would seem completely unnatural.

They look to none of the other immortals, taking a particular distaste to U'frek, who they believe turned a blind eye to Chrien's hatred of her creations. Rather, each tribe has found a deity to take stock in, patrons born from the depths of the oceans themselves and older than even some of the immortals. These beings are known as the leviathans, and dwell in the depths of Idalos' oceans.

The Mer communicate with one another and their Leviathan deity through telepathy, the thoughts of one translated not as words, but intention.

Is this the Gestalt Leviathan mentioned here? If so, can we expand a bit on how these factor into the Mers lives? If not, can we cover what exactly they actually are?

However, when the Mer turn their attention towards one another, they find compassion. The abandonment by Chrien, the fact that most of the other races detest the Mer, and the fact that they share a home as well as destructive tendencies creates a truce among the Mer tribes. Rather, they establish humans and Biqaj as their most prominent enemies, feeling the two and their use of flotation devices (boats/ships) give them no right to lay claim to any of the ocean's bounty.

So, a big ol' hunk of the Mer page is on the inter-tribal relationships, and how a bunch of them will attack the other bunch on sight. This is not very compassionate.

Also the Biqaj write up has this to say

The Mer and Biqaj were both created in the midst of the sea and from this a complex connection between the two races since their inception. The Biqaj and the Mer can sense the presence of one another, almost in the same way as the Mer can telepathically communicate, but in a muted whisper so subtle that it is only felt, similar to the feeling of déjà vu. This sense between the two has lead to a mutual respect. It is permissible between the two that the Biqaj is to rule the surface, while the Mer is torule the depths and that either race is able to partly delve in either domain for a time. Given this special connection between the races, coupled with the Biqaj’s general neutrality among the races, disagreements do not occur between these races.

Which seems like it contradicts. Can we get this cleared up? Personally I like the Biqaj version. I mean I don't think the Mer would want to be besties, but I feel like because of how rejected they are by Chrien, they wouldn't be in a hurry to destroy anyone they did feel a connection with even if they didn't actually like them.

The season of the Swarm,

Do they have any 'settlements'? Obviously with their tendency to strip their environment and then need to move on, you're not going to get great big cities, but are they full on nomadic like schools of fish just hanging out in the ocean? Do they find underwater caves? Do they ever build?

Money, they certainly have access, shipwrecks and all, but I feel like it wouldn't be used within the tribes. They don't have a need for material goods like most races. I feel like thats worth noting somewhere.

Skills, had this conversation with someone else. I'd originally had swimming as a skill, on the basis of it is like a human taking running. Sure anyone can do it, I wanted to do it better and faster. It was put forward to me that a Mer would use endurance/acrobatics to accomplish that, and having been born a Mer swimming is just assumed. Can we clear this up for sure?

Starting packages. There is not a single one that is even half applicable to a Mer. Clothes, nope. Tent, nope. Torches, flint etc, nope. I'm cool with that, but it will need to be developed for the future.

Though Mer can transmit their thoughts to other mortal races as well, many will choose not to do so. However, exceptions do occur.

So Mer can transmit their thoughts to others, how does that work in the reverse? My suggestion would be that it doesn't. except with the Biqaj. I think it would be neat if the Biqaj and Mer can fully communicate if both sides make the effort, but a Mer actually has to learn to understand other languages.
Last edited by Rend on Sat Apr 30, 2016 7:38 am, edited 1 time in total. word count: 985
Top

Replies from Mythic so far!

Re compassion;
Most of them hate each other. Their compassion flows within their tribe.
They're very territorial and loyal to their own, but care very little for the other types of Mer. With the exception of their allied tribes.

The Gestalte Leviathan is just a monster.
It is not one of the Sacred Leviathans of the Mer.

The subject of Mer starting packages has risen to become a prominent matter of discussion.

I think the Mer are supposed to be conflicted and contrary emotionally, resulting in their on-again-off-again hostility towards their own kind. They both love and hate themselves and their origins. Members of other tribes become the subject of their psychological transference of hatred towards Chrien, as well as occasional objects of sympathetic, misery-loves-company brothers in arms.

At least that's how I've always taken them. And looking at your Personality and History entries in your CS, I would say you flesh Rend out along these same lines.