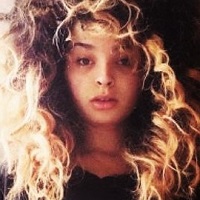 ≫ A scruff! With an 'earthy' vibe about her, her dark skin dotted with freckles, curly hair a mix of black and wheat. Wide cheek-bones are set beneath large hazel eyes. She's short in height, though thickly toned and strong (5'2", 9st). Her hands and feet bear floral tattoos to honour Moseke in the Sev'ryn way. A little obsessed with her herb craft, always with herbs entangled in her mane, or posies over-spilling her pockets. Not 'beautiful' at a glance, with skin marked by acne scars and bush-life, yet there is a rough charm to her. ≪
Scars
Injury/Illness

[columns=2]
≫ An adventurous spirit, with a spiritual heart. Trusting, determined, outgoing, curious and creative, you'll never find her bored with life. Warm, self-liking and deeply comfortable in herself without shadow of self-doubt. Passionate and stubborn, courage tinged with recklessness. A whirlwind that will sweep into your life, turn it all about, push and pull you whichever way, and dance off into the sunset with a whisper of a farewell. ≪
[/columns]

Earth, Stone, Nature, Life
Lö'we speaks about Moseke as 'Earth Mother', or 'Life Mother'. While the Sev'ryn do not believe in worship, they may pray in times of dire need. Lö'we honours Moseke by living in harmony with nature.

Pestilence, Toxin, Decay, Insects
Lö'we remembers Lisirra, from stories, as the plague that wiped out her ancestors; regarded with a mild contempt and enduring fear.

Clouds, Dusk, Stars, Hope
Lö'we holds a special place in her heart for the stars, seeking guidance in them when she feels overwhelmed or lonely. They captivate her.

Born 32 Vhalar 699
Birthplace, Desnind
▌
[img]http://standingtrials.com/gallery/image ... ge_id=1715[/img]
Lö'we began to show a curiosity for her grandpa's Witch-doctor work at 5 arcs spending many a trial with the grouchy elder—watching with wonder as he tended to those Sev'ryn that fell gravely sick, or suffered soul-sickness, madness.
It was her grandpa that gave her her first tattoos in honour of Moseke and told her stories of their ancestry. He warned of Lisirra, and armed his granddaughter with herbalist skills and knowledge to ward off sickness and infection.
Lö'we cherished the trials she spent helping him by foraging for leaves, stems, roots, flowers and bulbs, learning all the different kinds of healing plants, what they looked like and where they grew. Under his holistic tutelage, Lö'we learnt to craft simple poultices, tinctures and teas for healing fevers, infections.
Lö'we is so enamored with herbs, seeing them as magical, gifts from Moseke, that she'll always be found with a fair few in her hair or pockets.
▌
[img]http://standingtrials.com/gallery/image ... ge_id=1752[/img]
It was Lö'we's mother which she found hardest to say goodbye before she left Desnind. A warrior woman renowned for her enduring, inspiring, nurturing heart. It is where Lö'we gets her spirit.
Lö'we spent many trials in Saun on the sands watching her mother practise and train, and soon picked up a bo staff to imitate the woman she looked upto. Seeing her daughter, the warrioress smiled with pride, and began to teach her how to hold it, how to wield it to protect herself from oncoming foes, as well as how to strike back with fire and ferocity.
Though Lö'we never took to becoming warrior herself, she holds the skills close to heart, ever a reminder that she is strong and resilient, just as her mother, just as the Sev'ryn.
▌
[img]http://standingtrials.com/gallery/image ... ge_id=1714[/img]
Lö'we's father, much like her grandpa, a grouchy hunter. As she neared turning 7 arcs he began taking her out with him to teach her bush-craft, hunting, tracking, fishing—skills to survive.
Lö'we enjoyed these trips, finding that she liked getting dirty, working with her horse, being in the wilderness made her heart thrum. Though her father was a distant man, with an eternally furrowed brow and intense presence, Lö'we drew out his softer side. Especially in the evenings by the campfire, where they would tell each other stories about the stars. Lö'we remembers the names of those constellations—the way they can be navigated if lost. A peek of the night's sky reminds her of the Sev'ryn notion that home is not one place or hut—it is everywhere Moseke thrives.
▌


Zi'da 715—Ashan 716
Lö'we leaves Desnind, embarking on her spirit journey.
She travels wherever her wild, adventurous spirit takes her.
▌

Hearing stories of half-snake people, Lö'we curiously takes herself to
Ivorian
.
Inevitably she tangles herself up in trouble...
▌

Lö'we resides in the mountain wilderness outside Ivorian.