Sadon gets into the flow of the medical life.

Here is the City in the Trees. Desnind, home of the Immortal Moseke and much more! All IC writings in Desnind go here.
Post Reply Request an XP Review Claim Wealth Thread
2 posts • Page 1 of 1 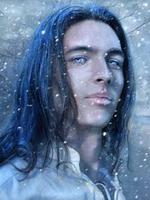 Sadon found himself at his table in his new home. He was still getting use to the city but he felt he was mixing in rather well. He had spent his days working in the Olọravu Slosneppe. It seemed he made a rather good fit with his medical past but he needed to know more. It was why he was up late at night having his books upon the table with a blank book and writing quill with ink.

His hand moving two jars about, holes were made in the cloth lid but inside the jar had greens, twigs and some water as a few small bugs gave light inside so he could see. It was a rather neat way to give light to the homes since you could not create a fire inside a tree house. It gave enough light for him to focus on his reading and study.

He was still new however to this land and while he was welcomed he still was not sure the common types of injures he would see day to day. It was why he wanted to spend a bit more time each night looking over his books, one that held information about herbs and one that was common medicine information.

The best way really was hands on but this would at least give him the framework for tomorrow. One could say he worried too much but he saw it as trying to take a proactive step as he knew people would need his skills one day when it did count and he could not make mistakes at that point.

While he could just read the books and call it a day he knew he would not learn much that way. It was why he was going to write it down in his own words, adding notes as he went along forcing him to understand what he was reading.

“Within this field you are going to see many things. From simple cuts, broken limbs, objects stuck in someone to even having to remove limbs yet all in the best to save a life.”

Sadon said under his breath as he read the book and starting to write down. His handwriting was far from neat. Letters were different sizes, the pressure from the tip of the quill pressing down too hard and too light in areas but it was not meant for other eyes. Just him and down the road he would copy it again but he wrote down the simple things that he might see.

‘Cuts, Broken bones, things that need to be removed from someone, remove body parts. Since I am in a jungle I may have to see people falling. Blood issues from poisons, animal attacks from hunts gone wrong. Maybe more. Note to Self, learn more of the animals in the area and figure out how they can hurt someone.’

He was worried about a few risks that this area would have. While it did not seem to fight others the animals were another story for hunters. That was even before he took the weather into account as he was not sure what they could bring either. It was one of the reasons he had a large bag of medical items on standby in case he had to make any type of house calls due to the unforeseen events.

“Cuts may look easy however can pose a risk. The location of the cut may get in the way or may have more of a risk. The first step is to try to control and stop the bleeding. Afterwards you can clean the wound with different items at hand and once the area is more dry you can wrap it or stitch it depending on the depth of the wound.”

He would need to study ways to clean wounds hands on. He knew he could use clean water and try to make a paste with herbs but he would need to think of other ways as well as he started to write.

‘Cuts - Don’t take them at face value. Stop the bleeding if can. Clean it. Dry it. Patch it best I can. Depending on the type of wound I may need to have a follow up done at a later point to check up on the healing or remove the patch if I need to stitch it up.’

While he was in the field to save lives he was not above having to hurt people to save them such as using needle and silk to bind a cut for the body to heal. He would have to look into pain management as well as he could try to make paste with herbs or teas to control pain levels. Maybe he would have to research ways to force the body into a sleep as well.

‘Note to self. Need to look more into herbs. Maybe poisons as well. Maybe find a way to use a small dose of poison to create sleep? Hmm need to research this.’

He wrote a little footnote on the page as he moved his neck around trying to relax. While it did not seem that much it was still a good deal to take in as he read over the book. Research was something he was not accustomed to but it was something he would learn with time. Tomorrow would be a busy day for him he thought as he was going to be in the clinic for most of the day treating people and learning more on the job.

Yet for now he would let his book dry as he took the cloth off the jar’s letting the bugs roam out as he stood out and laid in his own bed. It would be a busy day he thought but soon he would get into the flow of it.
word count: 982
Top

It was early in the day as Sadon became more use to his role in the city. He was tasked today with a low level care area. He would throw things in here that did not see as urgent care. So cuts, bruises, fevers, colds and the like. Anything besides that would be seen by someone else for now at least.

A book of herbs was normally found by him as he would have to consult it a few times to understand more of the herbs and how he could make blends to soothe people depending on what they needed. It would come in handy he thought until he could call off the herbs and cures by memory.

It seemed it would come more in handy as a young female adult came into the room. Her skin was dark, soft with dark eyes.

“H-Hello...I am looking for some help. I have been feeling rather hot past few days and thought I would come here for help while I am a bit free.”

Sadon just nodded as he waved to a bed nearby letting her lay down. It sounded like she might either have a cold or fever but a fever he found was normally linked to something else. Yet he would have to take account of what she was feeling, timeframes and anything else that she may have missed.

A log book was brought to him as he noted down her name, age, gender and why she was in. He figured it was best to keep track of trends that he saw.

“So how long has this been going on? Did you take notice of anything before it started? Any cuts, bites, food that tasted odd?”

Sadon asked probing her past as he took placed his hand along her forehand and back of her neck. She did feel rather warm to him as she went into detail of feeling more tired and hard to speak at times.

He went back to the book as he looked for tips to fix a few things for her. He needed something for the fever, maybe something to relax the body and find something that could help with sleep while she got better.

Birch leaf and bark could be steep in hot water to form a tea to help with the fever and muscle pain. The valerian flower could help make a tea to have a person sleep. Depending on the amount it could also do other things he saw in the book as he started looking around the building for few items.

It did not take long to find the birch bark and the valerian. Judging from her body height and build he would have to give her two or three servings but in the next few days she should feel better. He gathered three ounces of the bark and valerian and made three segments of it.
He took a small cup of hot water and mixed one ounce of the bark into the water and let it sit as he brought the cup back along with cloth bags of the rest.

“Take this now for the fever. I would take it two times of day and the flower will help you sleep while you get over this. Three days you should be back on your feet.”

He said as he gave her the tea to drink for now. In the past he would take a form of payment but this clinic was free for anyone that needed help. It was a strange way of life but something he was getting use to.

Afterwards once she was gone he would clean the cup and take note of the herbs he had used and what needs to get replaced due to it. Systems had to be put in place to keep track of what they would need.
word count: 645
Top
Post Reply Request an XP Review Claim Wealth Thread
2 posts • Page 1 of 1