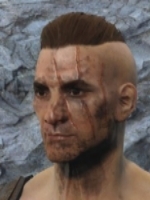 Partners:N/A
Appearance
At 5’8” , 78 KG and with a slim figure, the auburn haired Franz didn’t look the intimidating sort at first glance save for the fact that an impressive trio of scar ran over the left side of his face that were from a very close encounter with a bear that resulted in a permanent memento and a very hasty retreat. His hair was shaved from both sides leaving a wide line of hair running across his scalp. His brown eyes had this twinkle to them along with a perpetual smirk that indicated a certain sense of mischief though it was certainly not the pranking type one would hope.
There was muscle to his frame even if not readily apparent beneath his clothing, travel and carrying his gear resulting in a rather scrappy frame that was quite familiar with the use of said gear as well.

His choice of apparel is rather simple, leaning towards the gray and brown. Usually long-sleeved shirts and loose-fitting pants along with a pair of leather boots gauntlets.

Injuries 14th of Ashan, 716
Personality
A kind heart with a violent soul is perhaps the best description one would give to Franz’s character. His parents taught him kindness the best they could and to his credit Franz took to it well, yet deep within rested a hound who relished the excitement and danger, relished the good ol’ show of superiority.

This has created an adventurous man who seeks out interesting things to do, which more often than not translates to danger and battle, and see what goes about it in hopes of gaining some sort of rush. He will also be the source of trouble in that he has no qualms about starting a fight if he thinks the odds challenging enough. Yet despite this he is a kind man who is friendly, if not for his brasher aspects he would be preaching Rynlism.

Perhaps one aspect he is quite somberly aware of as of late is that despite his desire to seek excitement, he had no goals and with that he was like a collarless mutt waiting to be chained, a calamity waiting to happen especially with the wilder aspects of his personality involved. Thus he seeks a purpose and in his native land he can think no further than becoming part of the Iron Hand, where he thinks it will be the proper hand to yank his chain.

He has a loving relationship with his family, they fed him, changed him and tanned his hide when he was out of sorts so of course the bond was as strong it could ever be between parents and their offspring. So strong it is that Franz sets up the effort to visit them a few times every season.

He is often viewed as being scary looking with a cocky grin that is deeply contrasted by his deep voice with a cheerful and friendly tone to it as if everyone was his brother or sister. This is especially apparent with his interactions with children, treating them as if truly one of his siblings if he had any.

Unsurprisingly he has a fondness for meat and fruit, bear meat and apples being his favorite. He has low tolerance for bitter tasting drinks don’t get you drunk, citing that they’re ‘half the fun without the fun’. His sense of aesthetics extends to function rather than form, not to say he doesn’t like expensive items… simply that has no use for items that prioritize aesthetics whilst sacrificing its practicality. His favorite color is grey and gold, the latter because it’s his regional colors whilst the former he feels is underappreciated. He dislikes bright pink and often feels shivers being around an excess of it.
History
A lad of Rynemere born in the Krom Region, Franz was born the song of Edward and Anna Messer. They were a simple lot with a simple means of living. Edward was a hunter, not a renowned sort but competent enough that he could fetch the meat his family needs and the furs to trade. His mother on the other hand handled the trade of said furs and the rare excess meat they could not keep in return for fair profit, thereby providing the means to buy new clothing and other necessities.

As it stands, Franz grew up with little want or need. Spending time frequently with his mother as she barters and trades away his father’s spoils, often times being a pack mule carrying whatever items she managed to gain in exchange. When he was older he spent a similar amount of time with his father, who often told him to take note of his surroundings and how to skin the furs of animals.

As typical of a child of Rynemere, he attended school from his seventh arc till his 14th, unfortunately despite being a dutiful son he was much less so as a student. The reason for this was much less so his studies, as he was at best an average student, and more so his entanglements with the other boys. It was here that a more violent nature to Franz was discovered, especially when asked his reasoning for the fights was because “It was fun”.

While not exactly an undesirable trait, seeing as Krom’s nobles were partially characterized by their love of a good fight and so some would choose it as a blessing, it was troubling nonetheless. From here his parents and some of the monks tried to instill the values of the Seven in him in hopes of turning this trait into something productive for Krom and Rynmere.

It worked to an extent, even lessening the number of fights, but it didn’t stop them. Franz simply liked the sound of his fists meeting someone else’s face too much to stop. That sense of danger was further expanded upon once he graduated from his public studies and began helping more around the home. Spending a portion of his time buying some perishables. It was during this time that the ever common view of the Iron Hand Knights, something seen every day yet so easily dismissed because of it, was seared into his mind.

It was simply a patrol walking through the fort’s main path, with a purpose to their walk and a sense of unity to their purpose. Their cloaks blowing to the wind on that day like banners with their arms ever at their side ready to dole out justice wherever and whenever it was needed.

He associated them with danger, with power, with EXCITEMENT! It didn’t matter to him one lick about the glory involved nor did he even desire to join the Iron Hand at the time, he just wanted some of that danger. And so much like an ape imitating a man, as well as some pleading and groveling to his parents, he took to training with practice weapons and through this he’d met one of his closest friends, Graham Tillers. Graham never had the desire for danger Franz carried, but the desire for glory was there and so a bond was formed then and there between them.

The passing of the Arcs found Franz a mercenary, one who enjoyed what he did yet feared it at the same time. Each and every time he fought he felt like he was toeing a line of sorts, fearing this the image of the Knights from the faithful day would make itself known. Whispering to the back of his mind that he got the wrong message and perhaps, just perhaps, that it was time to set that right….
Housing

An apartment in lowtown in Andaris is what he currently calls his home. More to appease his sense of danger although a current lack of coin at the time did play a fair part perhaps. The tight confines consisted of simply a single small bed as well as a plain chair and small table. Often times dust collects showing how little he was at his own home other than to sleep.
Knowledge & Skills