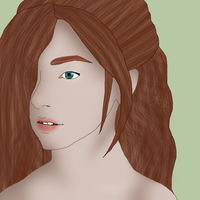 Appearance
A petite young woman standing at five feet and two inches, she is fairly thin and lithe with a somewhat androgynous figure, lacking in curves that one would expect from a young woman. Her skin is cool toned and lightly tanned, though still fairly dull in colour. Her hair is a reddish toned brown that is usually tied back and hanging to the middle of her shoulder blades, and her eyes are a dull greenish blue.
Index
Personality
History
Skills & Knowledges
Skill Point Ledger
Marks
Possessions
Wealth Ledger
Renown Ledger
Threads
word count: 116
Top

Personality
As a child Kella was loud and rambunctious, constantly causing trouble wherever she went and letting everyone else deal with the consequences instead of facing her own mistakes. Now Kella is the same person but is attempting to start taking responsibility for what she has done, though being the same person she was as a child, she's finding this fairly difficult.
She's calmed down slightly, not getting into as much trouble as she used to. She still doesn't know when to hold her tongue, though she can hold back her fists when she knows she doesn't stand a chance.

History
Kella was born in Bayward, near Ne'haer, to Tilon and Maris Bhihror, a brewer and has medicinally inclined wife. She was raised alongside her half brother, a half Ellune named Caden, who was six years older than her. Neither of the children were given rules to follow and were allowed to run wild. While Caden discovered his love for music at a young age, Kella discovered her love for mischief, constantly attempting to cause trouble and then leaving Caden to deal with the repurcussions.

She had few friends as a child as many saw her as too much trouble and hard work, so as she grew she became more malicious and distrusting of people, finding herself beginning to grow less and less fond of Caden as he tried to enforce rules on here.

When Kella was seventeen years old, she started a brawl in a bar that resulted in a few people becoming injured, after which Caden insisted on her leaving Bayward for her safety. Her brother gave her his lute and Kella set out for Rharne, knowing that her brother would be following her once he'd managed to organise his own affairs.
Upon arriving in Rharne, Kella became determined to make something of herself and become a better version of herself.

Here is where you record all the skill points you receive (Startup XP, CS Approval Rewards and, of course, Thread Reviews!) and all the points you spend on your skills. Again, below is an example which you can edit.

When you are first awarded a mark, the awarding Prophet will give you the code to put in here.

Here, you record all your purchases - keeping a track of money going in and out of your character's account.

Well done! This is the end of the CS. This post will be used to record past and current threads.
Just before you apply for approval, think about the following:
word count: 186
Top
Post Reply Request an XP Review Claim Wealth Thread
10 posts • Page 1 of 1