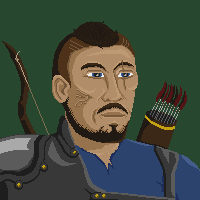 Appearance
At first glance, Eskard appears rough and disheveled, a messy smattering of facial hair covering his scar-marked and weatherbeaten skin, with each side of his head shaven down near to the scalp, and what remains of his dark brown, hair in the middle swept and tied down at the back. In contrast to his rugged appearance, his blue eyes stand out quite sharply, framed with the beginnings of crows feet and bags formed of sleep deprivation. On his right cheek stands the prominent appearance of a pale and faded brand scar, a sign that he was once a slave, and will forever be affected by it.

Eskard is by no means a large or tall individual, but he is not an overly small one either. He stands at 177 centimetres, or approximately 5’ 9”, although his stature gives the impression of being shorter, his youth spent in servitude giving him the habit of casting his gaze away from others and seemingly shrinking in the background of whatever place he is currently in. His form itself is very well conditioned, being lean, toned and muscular, his sources of sustenance mostly self caught and healthy, paired with a strict regimen of training put upon him by his former owner that he still adheres to, to this very day. The less immediate showcase of his former lifestyle comes into focus when undressed to any particular degree, his body carrying a number of markings and scars that, while worn and faded, highlight the less than happy youth he has had at the hands of some of his former owners.

The majority of the clothing that Eskard wears is threadbare, shirts that have very obviously been torn or ripped in the past patched amateurishly in an attempt to keep them going for at least a little longer, and the leather articles of clothing, such as belts and boots, severely worn down and at the point where any reasonable individual would have sought replacement already. The only well maintained and polished items of clothing that Eskard frequently wears are his thick soled boots, which even given maintenance, are starting to wear down on the bottoms. The last, and probably most important item of clothing that Eskard carries, is his mask, fashioned of sturdy shaped leather and straps that tie at the base of his skull, it is with this that he almost attempts to hide from his past, and try not to stand out too much as a former slave.
Index
Personality
History
Skills & Knowledges
Skill Point Ledger
Marks
Possessions
Wealth Ledger
Renown Ledger
Threads
Last edited by Eskard Vanikhyr on Tue Oct 02, 2018 7:13 pm, edited 7 times in total. word count: 460
Top

Personality
Eskard is very much the product of circumstance, having had little time to properly form an ironclad personality before he was taken as a child of a mere seven arcs, although a few fundamental traits remain within him from those times, being his intense loyalty to his family, and sense of obligation and honour instilled in him by his mother and father. A person who has had the majority of that which he loves taken from him, Eskard does not particularly fear anything, and holds on more to the hope that he can one day reclaim that which he has lost, and reunite with at least some of his long-lost family, something that has become a driving force for his continued existence.

In social situations, Eskard is not precisely what you would call a social butterfly, tending to mostly avoid the stares and glances of strangers until he has come to trust them, something he is almost always wary of, due to his insight into the darker nature of people. While he may shy away from heavy social interactions, he nonetheless has a keen desire to be of help to others, whether this be from his sense of obligation, or the conditioned mentality to serve that was beaten into him, it is unclear, but Eskard tries to remain true to his inner self, believing it is the best way to live a fulfilling life, something he had promised his last owner he would do.

There are few things that bring out anger or vitriol in Eskard, but none bring it out of him more so than slavery, something that he has felt first hand, and lost a great deal because of, and it is only through control and willpower that Eskard can restrain himself when faced with slavers or slavery, more often than not reminding himself that it is a matter of time until he can gain the abilities to free those under another's yoke.

Overall, Eskard comes off as a thoughtful and cautious individual, one who wishes vehemently to help others, but prefers to stay neutral to overall conflicts, doing his part to aid whoever needs it the most. He is slow to anger with notable exception, and values loyalty above all else, even should it cost him personally, and carries an inner strength born of the hope he keeps within himself that his family is still out there somewhere.

Possessions & Housing
*: Given on Approval.
Housing
Eskard lives in the home he once shared with his former master, Vindemar, it's a quiet, unassuming place in the backstreets that has little in the way of decoration, and is more for practical use, kept clean and tidy but very little in the way of belongings left within beyond the basics, with Eskard not feeling he needs much, especially considering how often he is out of the city.
Last edited by Eskard Vanikhyr on Wed Oct 24, 2018 10:08 pm, edited 3 times in total. word count: 143
Top